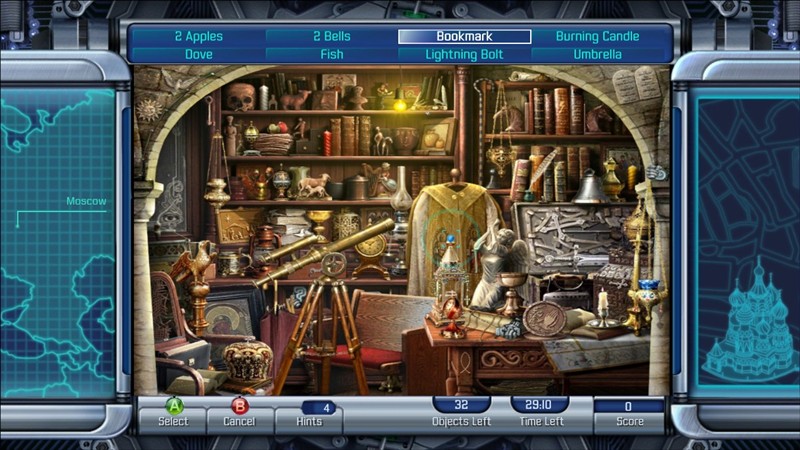 Take on the role of an Interpol agent as the organization against International criminals aims to nab the fiendish Dr. Chaos and his cohorts. The game cost 800 points and offers single and co-op play on and offline.

The gameplay can be summed up pretty easily. You travel to various locations around the world and are presented with a snapshot of a room. The room is crammed full of objects which mostly relate to the area you are in. So for example in Hollywood you’ll enter a movie studio and props department, which contains various props and recording equipment.

As an agent, your job is to scan the rooms with your pointer and highlight the required objects which are listed at the top of the screen – you can zoom in like a magnifying glass for a closer look. There’s a time limit counting down and a score given, based on how quickly you complete the location. Each location consists of 3 to four rooms, with some featuring bonus areas.

The real trick to this game and what makes it rather compelling is the fact that it is often very hard to locate some of the items due to how hap hazard the rooms are laid out. If you imagine something like where’s Waldo and you’ll get the picture. So finding a tiny cat on a screen awash with objects isn’t as easy as it sounds. For the impatient, you can use a hint but the usage of these will naturally affect your score.

The whole story element to game is rather pointless and whilst Dr Chaos looms, the hunting for clues is rather unrelated – why would finding three cats in a room relate to Dr Chaos, or is there something about the doctor they are not telling us? Either way you’ll most likely skip and ignore the text based info between areas and just focus on hunting foe the items.

The graphics are pretty basic as it’s just snapshots of rooms, there are some minor animations but generally having too much movement would have made the game too confusing. However, the general presentation is good with only one minor issue, and that’s the low quality when zooming in. Sometimes it is very hard to even tell what some of the objects are, and although you can make plenty of mistakes, (make too many and you suffer a time deduction penalty) the idea is to find them without furiously clicking on every object hoping to be successful.

There’s not really much to say about the sound other than it’s functional and serves its purpose of background noise while you hunt for the items.

The game can be beaten quite quickly (in a few hours), however gaining high scores will take lots of replays and a good memory. The items you have to find aren’t the same each time and so you’ll have to keep playing to memorize all of them; naturally this is going to take you quite a long time. The achievements are pretty simple to obtain, and even easier if you decide to play the co-op online.

The co-op is an interesting feature, because up to four players can tackle the areas together. It’s actually quite amusing when there are four players hunting one of two items where everyone is stumped. Teams of players who learn where the items are co-ordinate, who searches for what items, will no doubt be the top scoring players for the game’s leaderboards.

Those of you wishing to play with family and friends locally can do so as well which is something that anyone can participate in and gain some enjoyment – the bigger the TV screen the better.

The only thing that is absent is a versus mode. To me this seems like a natural feature for those who have mastered the game. You could have had a situation where players duke it out to see who will find the most items with a score based across each area.

Interpol is an interesting Xbox Live Arcade game and one that offers easy pick-up and play mechanics. It’s a puzzle game that you can play in small doses and is well worth it for keeping non-gaming family members and friends entertained. Even younger players will get some satisfaction from playing alone or in co-op. Is it worth the 800 points? I would say so, although a few more additional areas would have been nice to make for a fuller game.