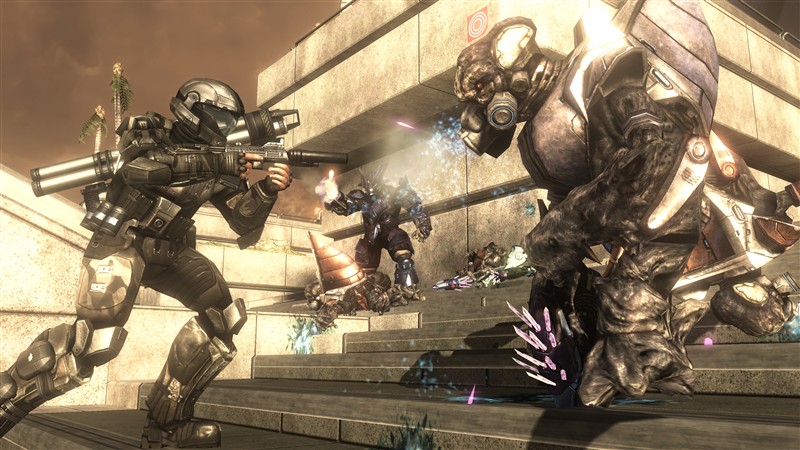 Halo 3 was and still is a huge hit for Microsoft and Bungie when it launched, and whilst maybe attracting its fair share of cynics, proved that even after two previous games there was still lots of life left in the series which started on Xbox and has proven to be a flagship title for the Xbox brand. Whilst Halo 3 brought the series’ story to a climatic end, (with some questions left unanswered) it was perhaps time to take the series into a new direction, which is perhaps what was needed for a series which could easily have become too familiar and losing its edge due to over saturation of releases. Cue Halo 3: Recon or as it is now known Halo 3: ODST. Starting out as an expansion for Halo 3 and then becoming a fully fledged standalone game, Bungie’s efforts were to create something new for the series to not only appease fans but to prove that there’s life after Master Chief, the series’ main protagonist who remains absent from this game. With eyes firmly fixed on what Bungie could do with the series, has the departure from what’s expected been a brave move worth taking, or has it left gamers with a disjointed experience that features expected traits but lacks the charisma of previous games?

Halo 3: ODST or ODST ditches the tried and trusted formula and places gamers into the shoes of not only one character but several. This idea was experimented with in Halo 2 as gamers played some of the story from the perspective of the Arbiter. In ODST this ideal has been expanded fully and so to begin gamers fall into the role of ‘the rookie’, a nameless, faceless individual who acts as the catalyst which ignites the story and shifts it along without being too intrusive. The game splits itself into two very distinct parts, with one being a less rigid experience as the rookie, and the other being more familiar missions with the other characters. The rookie’s endeavours are more like exploration than out and out combat and with the backdrop of the war torn city of New Mombasa being explorable means that you’ll be thinking as much as you are shooting in these poignant moments. Without ruining any of the story, your task is to merely search through the ravished streets looking for clues of the whereabouts of your lost ODST unit.

The rookie moments take place during nightfall, some 6 hours after your unit lands and is fragmented, which means you’ll be searching very dark locales with dashes of light coming from all sides as you scour the city for evidence, a lot of your vision will be using the special ODST visor which creates a more synthetic look. That’s not to say the streets are devoid of activity as there are plenty of encounters with covenant patrols alongside the tarnished bodies of the fallen, telling a tale of previous bloodshed/occupation before your unit arrived. The exploration, mystery and intrigue is captured very well here as you search and look for answers, nothing really explained in great detail to keep the suspense high. You’re effectively piecing together the story like a jigsaw puzzle, with the option to tackle the order in your own way (which is not noticeable at first).

When you do hunt down a clue, you’re treated to a flashback moment via cut scene where the game shifts perspective to the relevant ODST member; the game shifting its focus and adopting a more regimental mission structure. It’s here where the game feels very familiar, very Halo, as you team up with AI and tackle more oppressive covenant forces using weaponry you’ve become accustomed to over the years, except even on the default normal setting there are some nuances which make the game feel familiar yet fresh at the same time.

The level design in particular offers some interesting moments to accommodate the fact that you’re not guns a blazing shielded up Master Chief and a more fragile soldier. Meaning charging in isn’t always going to pay off, unless you’ve got mad skills. Your health does not regenerate, and there’s a real sense of urgency once you hit the red and your suit starts beeping, alongside the heavy breathing to warn you of low health. This lends itself to a splattering of guerilla tactics as you pick your moments from cover, move around and line up head shots on the tougher brutes, weakening the enemy’s resolve before mounting a direct assault. It works well and in this regard feels more like Halo on a tougher setting than what you might be used to. The missions are well varied and allow for some free form moments with vehicles and keeping fellow team mates alive or going solo if you choose. All the ingredients are here to make for a solid and encompassing FPS experience that offers enough gameplay choices to keep things fresh. Competent, exciting, never a dull moment and distinctively Halo with its own touch of style.

The graphics might not be on par with the likes of Gears of War 2, but that’s really not an issue, there’s a distinct art direction with the game which is more often than not shrouded in darkness, not necessarily to hide or conceal, but to create atmosphere. It works extremely well and compliments the element of exploration, especially the times when you are alone. The city has been rendered very well and feels alive despite its desolate demeanour. There’s plenty of evidence of a well populated and hi-tech city and this has been conveyed beautifully. Take one look to the skies to see the impressive surrounding sky scrapers and the effects of invasion or the crashed vehicles which litter the streets alongside the debris from a well used city. The atmosphere is certainly up there with the greats and pulls you in as intended.

The character models are very much the same as Halo 3 as not much has been improved, and to a degree they do look a little dated in some regards, but overall their movement and behaviour is as good as you’d expect, although there are some instances where you might be left scratching your head as enemies flee past you rather than run away. It’s easy to dismiss the graphics as simple but taken as a whole they are vibrant, distinctive and effective at providing a city based backdrop to killing covenant and exercising your detective tendencies.

The audio is top notch, with some decent performances from the voice actors making for compelling listening, especially as there is plenty of chatter as you’re shooting up Brutes and Grunts. What is worth noting are the sounds made when being hit, showing the vulnerability of the ODST compared to the overly composed Spartan characters. However the real star of the show aside from the quirky sound bites and familiar explosion and shooting sounds is the music. This has been lovingly crafted to blend with the dark and mysterious atmosphere. You’ll hear some excellent tunes, even when exploring or leaving the game idle for a moment. The music dancing in and around familiar tones and themes from past games, with even the sound of a sultry saxophone making an appearance in one track. The music is of such high quality and fitting that you’ll be left encapsulated in its grasp as you play. A job well done, and showcasing that no expense has been spared with creating a memorable soundtrack that is a joy to listen to whether you’re playing or sitting on the sidelines.

ODST offers a campaign that is filled to the brim with features taken from Halo 3; so that includes the scoring mode, skull modifiers to make for a more challenging experience, co-op play for two players offline or online with four players. So although initially the length of the campaign might appear to be short, there’s enough replay value to warrant running through again on tougher settings or playing with friends. The game also features the theatre mode from Halo 3 which allows for replays of your endeavours which can be saved and shared with others. Another neat feature is a secondary story which meanders around the free roaming element throughout the story and when you can explore the entire city once you beat the game. You’ll be able to collect 30 audio logs which tells another story and adds considerable hours onto the story as you search and hunt down these files.

ODST also features the all new Firefight mode which is a shared mode for up to four players versus wave after wave of AI opponents. This is an endless mode which can eat away the hours and offers plenty of action with no respite. ODST also features a second disc which includes all the new maps from Halo 3, so you’ve got competitive team or solo based online multiplayer to mess around with on top of everything else. The Reach Beta access is a bonus and not really a factor in this review simply because as it stands on its own merits ODST has enough meat regardless and Reach access is the icing for Halo fans.

A lot has been said about the pricing of the game which as already stated, began life as an expansion to Halo 3. Looking objectively it’s clear to see that had the game been originally announced as a stand alone product perhaps ditching the Halo 3 moniker and just being called ODST, then the overly vocal complainers would really have nothing to complain about. The Halo 3 maps are a bonus, the Reach Beta is a bonus and yet the ODST campaign and Firefight Modes warrants the pricing. It’s not greedy Microsoft, it’s a game well worth the price of entry simply because there’s enough hours of entertainment on disc 1 as is, enough said.

For Halo fans you’re not going to go wrong with Halo 3: ODST. You’ve got an engaging single player campaign that is wildly different from previous games, yet contains recognizable nuances in keeping with the series. You’ve got the additional multiplayer options for on and offline play, making the game one hell of a package. Even if you’ve not really gelled with the series to date, as a standalone title, ODST is well worth checking out, it’s a shooter, and a great one at that. It might be lacking the realism of other games, but if you’re simply after some unadulterated action then this is as good a place as any to invest your time – and that includes those of you who aren’t so keen on the multiplayer aspects as well.

Bungie have done a grand job in expanding the Halo universe here and although the story aspect might not be as rigid as previous games, the execution and presentation is second to none and has been well thought out to capture your imaginations even if you don’t immediately gel with the players on the stage as readily. With so many shooters coming from all sides this generation, it’s not easy for developer to bring something new and exciting to the expansive first person shooter table, yet somehow Bungie have managed to not only cater to a welcoming audience, but have created something that should satisfy the most ardent and particular of shooter hungry gamers. Get ODST as you won’t regret the purchase, there’s a reason why the Halo series is so popular and ODST personifies this perfectly.