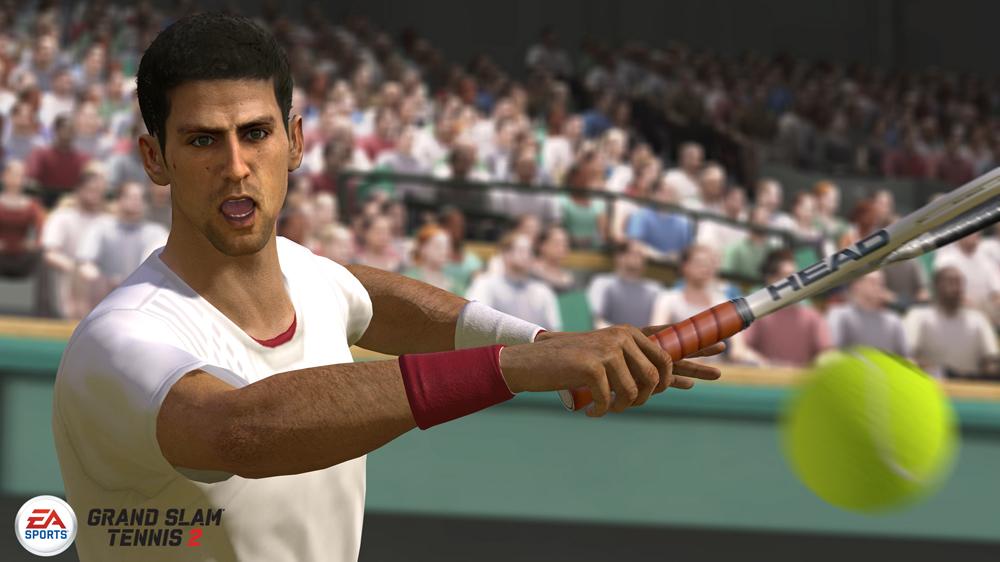 EA enters the fray alongside the efforts of Sega’s Virtua Tennis and 2K’s Top Spin series with its own Grand Slam Tennis. This is part 2 of the series and seems to be an encompassing package that spans 20 years with its ESPN Classic matches. With an extensive career mode and online play on offer, how well does this tennis game stack up against its competitors.

Grand Slam Tennis 2 features several modes of play including the aforementioned career mode where you can create a character (male or female) and then enter into various exhibition matches and tournaments with the aim of reaching the top seeded position after a set number of seasons. This is perhaps the lengthiest mode in the game, but does allow you to tweak the matches to suit how much time you wish to invest in each game. You can opt for full sets and games or shrink them down to just 1 set and 3 games making for a more speedier progression. To sweeten the deal, there are points to be gained via victories and performing various challenges during matches – these aid the speed at which you’ll be seeded. The career is an interesting mode because it provides all of the game’s nuances rolled into the one mode including exhibition and training routines which can also be played outside of the mode. You’ll face off against unknown AI opponents as well as some familiar faces from the tennis world. There’s 15 men and 8 women players on offer by default. Naturally you can create various other players that are absent with some quite extensive and easy to use tools, and by using the game’s creation tools on the EA website you can literally put yourself into the game quite successfully.

Aside from getting down and dirty in the career mode there are other modes to sink your play time into such as single Tournaments, Exhibitions and training with John McEnroe. The exhibition matches can be player singles or doubles, so pretty much all bases are covered here. There are 16 of the finest courts on offer, each with their own theme which affects play such as clay, hard and grass courts.

One of the more interesting inclusions is the ESPN Grand Slam Classics mode which spans some 20 years of tennis (from 1980s to 2000s) and allows you to play real life scenarios from yesteryear up to the more recent times. There’s a few fantasy scenarios thrown in as well, but you’ll have to unlock these by completing the others in progression first. For example you’ll be able to play the classic 1980 John McEnroe versus Bjorn Borg at the US Open which is an iconic match if you follow tennis, but not the very match where McEnroe utters the classic “You cannot be serious”, “the ball was on the line” to the umpire which was a Wimbledon match in 1981. The classic matches are welcome offerings, but there’s no real penalty for playing as the other player and changing the course of history.

So, the actual gameplay is pretty solid and offers arcade controls using the face buttons or the total control using the right thumbstick. To be honest, using the thumbstick takes some getting used to and might leave some players gasping for air at the lack of precision it’s supposedly offering. Using the face buttons feels very much more accurate and a better option all round especially if you’re used to other tennis games. Simply hold down a button for power and release just after the ball bounces and you’re in the right position for a decent return. It’s very easy system and when things like drop shots and lobs are controlled by the left and right triggers, you’ll find a game that most people will get to grips with in no time.

The ball mechanics are all rather spot on, and you’ll sometime have a random element thrown in to keep you on your toes – such as hitting the net by error. The players move realistically and certainly look the part with some pretty good character models and animations. There are a few moments where the camera pans close to the characters – after a decent winner – and they do show some emotion at times like pumping fists, or even tossing their racquets to the ground in disgust.

The courts are also well realised filled to the brim with spectators, ball boys and the linesman. Realism aside you will see some minor rendering when the camera first pans around the court which is a shame but is nothing that hampers the generally very polished looks on offer.

Audio is also pretty good with some solid audience ambient sound effects and the grunts and moans of players perfectly captured. Pat Cash and John McEnroe provide the commentary which is fun for about 10 minutes and then needs to be shut off. Why do developers not have a feature where commentary can be interrupted if something exciting happens on the court during one of many pre-set rambles that only want to play from start to finish regardless of what’s actually happening. In this regard and with repeated phrases happening too often, the commentary is a big let down and like most sports games needs to be turned well and truly off. Menu music is provided by Paul Van Dyke and offers some refreshing upbeat tunes for the menus only which is a nice touch.

With many hours of play on offer and a variety of modes for on and offline players to keep tennis fans hooked, Grand Slam Tennis 2 is an easy game to play that offers some challenging moments the more time you sink into it. The presentation is slick, the commentary dull, but the general ambience is of a good quality. With a reasonable roster of players who look like their real life counterparts, the game is worth checking out, but it’s hard to recommend this above any other tennis game as they are all pretty comparable in terms of what they provide. If you simply want the latest tennis game then no doubt this will fit the bill, if not, then one of the older games will probably be suffice and a bit cheaper to purchase.