Ubisoft’s Free to Play Spartacus Legends has seen success with over 4 million players logging in to the game on Xbox Live and the Playstation Network when it launched not so long ago. To mark the game’s illustrious achievements and an all new Tournament mode which arrives this Autumn, Ubisoft released an info graphic. 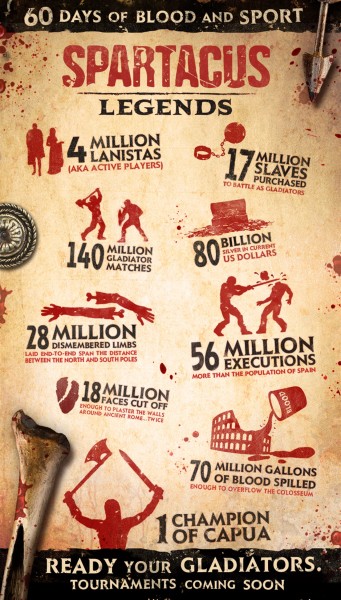 Statistics from the game’s first 60 days, including:

·         18 million faces cut off, enough to plaster the walls around ancient Rome, twice

·         70 million gallons of blood spilt, enough to overflow the Colosseum

Players that take part in Tournaments will receive in-game rewards including gold, limited edition equipment, and the chance to gain unique gladiator titles, including “Champion of Capua.”