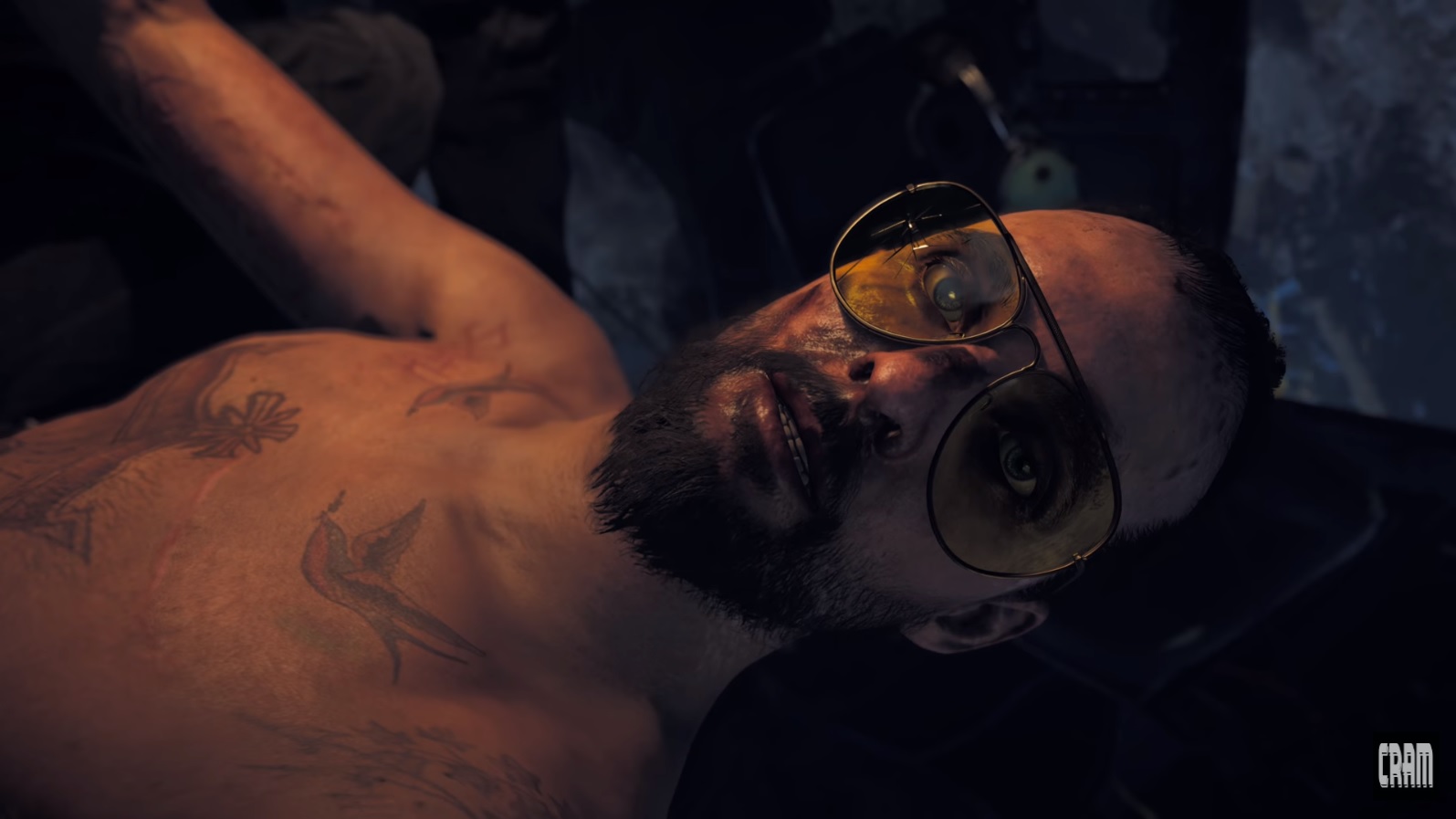 Far Cry 4 released in late 2014 and so over three years later Ubisoft Montreal has unleashed Far Cry 5 to the masses. This unrelated game comes complete with a new protagonist, fictional US setting of Hope County Montana, and a sandbox open-world filled with plentiful things to do. A new enemy has risen with the rise of the Seed family headed by Joseph Seed and his group of religious zealots, or cult which sets out to save its members from an impending apocalypse. It has to be stated from the off that this time players get to choose the sex of their character, although in the solo game the player character is not seen at all and only heard when grunting or visualized via the odd hands and arms during cutscenes. There are no lines of dialogue and so it’s up to the supporting cast to set the scene and urgency for each mission, of which there are many moments. The question one has to ask is, new setting, new enemy and new mute lead character does this culminate into a cracking first person shooter action adventure, and more importantly is it worth picking up?

Once the game’s opening pleasantries are out the way, players are then free to explore Hope County as they see fit. It will take around an hour to move into a position where there is a choice as to what to do next. The fairly large world map is divided into three main areas which correspond with Jacob Seed, Faith Seed and John Seed characters who are area bosses who need to be put down – much like how the bosses played out in Ghost Recon Wildlands. Players can pick and choose which area to clean out first with points being gained for each action which then leads to drawing out the boss once enough points are accumulated. As you would expect, there are story missions given from your NPC companions, and then a whole host of side-missions that can be tackled at leisure. Each objective fits in with the goal of ridding the area of the cult one way or another so feels a lot more in tune with an overall sense of accomplishment. There are strongholds to either stealthily or noisily take over, rescue missions, destroying drug farms and even taking out sub-bosses. However, at times the gameplay does feel a little like it’s parodying itself such as early on where there is a reference to climbing towers, which are unsurprisingly absent from this adventure. A lot of the design is heavily borrowed from Wildlands but in this case there are forced story sections where the player character becomes hunted and has no choice but to see events played out. This is both a positive and negative in the sense you never lose sight of the story but it being forced upon you can be a little disruptive depending on what your character is doing at the time. 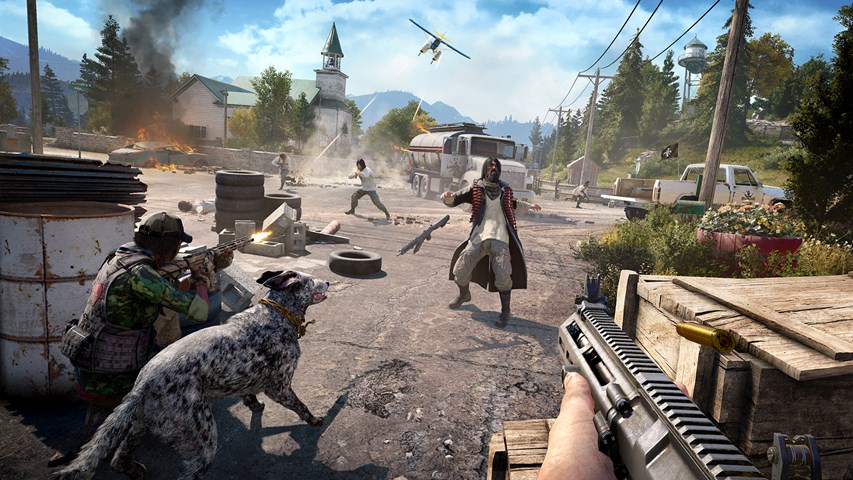 The overall gameplay hook is familiar ground here, destroy this, take down that and sneak here but then again why change a formula that works. It’s safe to say that Far Cry 5’s gameplay is a refinement of what has gone before it although still has a few issues which might annoy. Sadly your character and AI companions (of which you can now have two tagging along) aren’t able to properly blend in to the environment which seems to be a problem with Ubisoft’s open world formula. The developers want you to be constantly engaged, always on edge and not allowing you to just kick back and live in the world. This approach was the bane of many players in the African setting of Far Cry 2 and it remains here a decade later. To put it bluntly your character has a massive (imaginary) beacon attached to them so that every animal, man and craft can spot you when passing and attack on sight. Great for those who love to be constantly shooting at things, but not so good for the stealth lovers. Annoyingly, some times a stealth run can be interrupted by a random encounter kicking in making all hell break loose which feels counter-intuitive at times. That said, some of the random unscripted events can be the most fun or create genuine laugh out loud moments.

In terms of shooting or stealth based play, all of the features are in tact, such as marking enemies before diving in, silent chained melee kills or take-downs, silent sniping with bows or guns, and an upgrade system which doesn’t require finding loads of parts and uses cash instead which feels more fitting in this environment. It’s hard to criticize the combat because in general aside from some dodgy AI moments it works really well and feels pretty satisfying taking down man or beast. 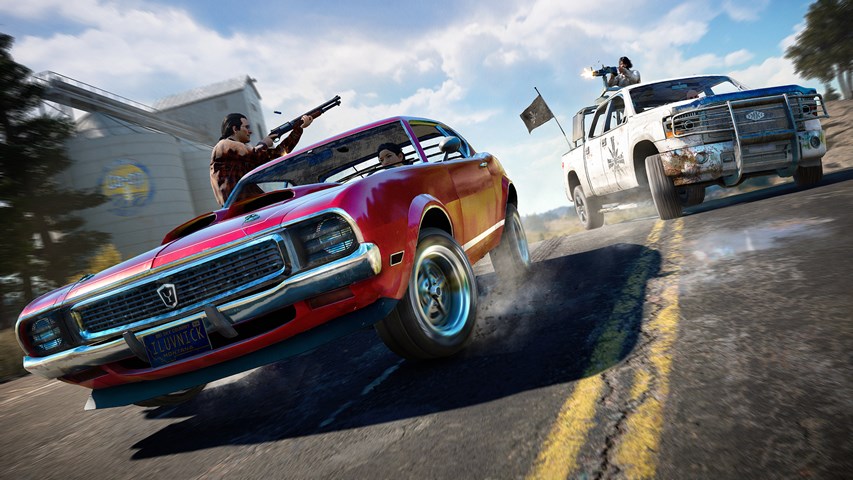 Visually, Hope looks pretty fantastic at times with neat lighting effects, long draw distances and real-time day and night cycles, although the transitions happen a little too quickly for our liking. Sadly there isn’t as much visual variety when compared to Wildlands but each themed area feels somewhat different. There are a lot of repeated models for the main grunts, but it’s nice to see a wide selection of NPCs which can be recruited into your party as previously mentioned. There are 9 story related characters including three animals and then several random AI characters (both male and female) to pick up. It’s shame we can’t have a turkey companion though. The game runs smoothly as well on Xbox One X with great use of HDR. On PC it also shines although a top end GTX 1080 Ti isn’t going to reach 4K 60 fps using the game’s ultra preset – it’s close at around 40-50 depending on the location. Either way, there are plentiful options for PC players to tweak the settings to suit, where playing at 1440p 60 fps is more realistic and somewhat preferable for PC couch playing.

Audio is a mixed bag with a number of unusual track choices being played to suit the story’s brain washing evangelism. You will hear music blaring out at all times in populated areas whether you are in a vehicle or not. Sadly it cannot be muted in the options and can be distracting. The actual game soundtrack isn’t bad but nothing that stretches beyond setting a tone for story action sequences. The voice acting is of a high quality though with solid performances all round, but it’s the companion banter that really stands out even if phrases are constantly repeated. A word of warning. This is a game that requires headphones if younger family members are in earshot. Lots of f-bombs and surprisingly no c-word though even if it wouldn’t sound out of place at all coming from one of the female NPCs. 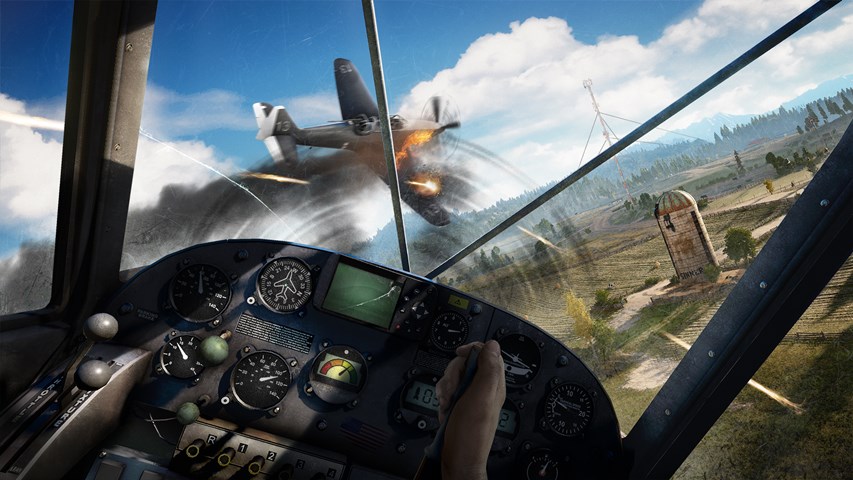 Far Cry 5 offers enough missions, side missions, collectibles, hunting and unlocks to keep players well entertained into double figures. However, it has to be said, there is no going back to finish things off once the last encounter is triggered. So be warned! There is also no new game plus which is a shame. In addition to playing the game solo, players can also hook-up through the story in co-op, again much like we saw in Wildlands. This is a drop in and out option and allows for plentiful fun and games. There is a multiplayer and extra missions to dive into with Far Cry Arcade which adds even more gameplay scenarios to the table – including a fully fledged map editor for creating levels and objective based quests. The community element here is good, so even if map making isn’t your forte, then at least there are others willing to share their creations.

Far Cry 5 isn’t so different from its predecessors and improves in some areas, however it’s not perfect especially with regards to how the story is presented. Whilst it all feels pretty good at the start, most of the boss encounters are underwhelming affairs and sometimes offer repeated moments which shows a lack of imagination. In fact, the boss encounters are perhaps the game’s weakest element and it’s the journey there which feels more engaging. That said, all things considered there is a feature filled game here that will resonate well with Far Cry and shooter fans alike. Good value for money and fun to boot which makes up for a lack of overall imagination or straying too far from the series foundations.