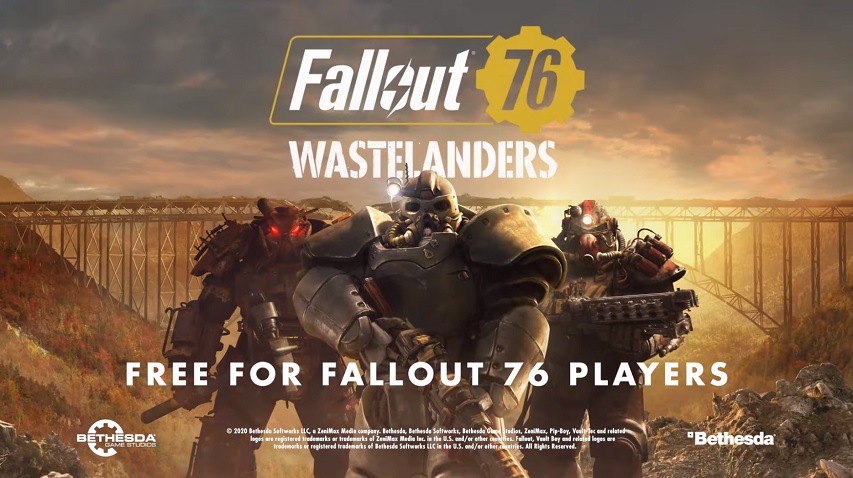 Fallout 76: Wastelanders, comes as a free expansion for Fallout 76 on April 14th for consoles and PC. Take a look at the trailer and then chew over the details.

People have returned to West Virginia in Fallout 76: Wastelanders. Two opposing factions are fighting for the upper hand as the secrets of West Virginia are revealed, and you will be the one to tip the scales. The Settlers have come to find a new home, and the Raiders have come to exploit them. Your choices will have lasting effects on the world and the lives of these newcomers. Embark on a new questline, forge alliances with the competing factions, and uncover the truth of what’s hidden in the mountains.

Play Wastelanders, a free expansion for Fallout 76, when it releases for Steam, B.net, Xbox One, and PlayStation 4 on April 14, 2020.

Wastelanders includes:
• New Main Quest – Uncover the secrets of West Virginia by playing through an all-new main quest, starting from the moment you leave Vault 76.
• Human NPCs – Befriend or betray new neighbors who have come to rebuild, and experience Appalachia through the eyes of its residents.
• New Creatures and Gear – Take down newly mutated creatures finding their way to the region and earn the highest tier of weapons and armor.
• Choices and Reputation – Alter the fates of those you meet with dialogue trees. Decisions affect your standing with each faction through an all-new reputation system.
• Game Optimizations – Many optimization and interface improvements, including a new way to track your quests as you explore the wasteland.