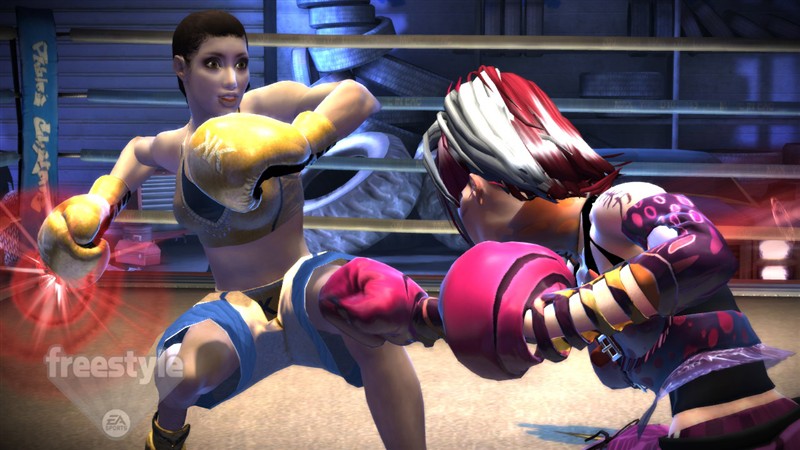 Boxing games have been few and far between on Xbox 360 with only a handful of them to grace the console when compared to the huge number of other sports related games, such as Soccer, American Football, Golf etc. Unlike these more mainstream sports, Boxing does not seem to warrant a yearly update. This is most likely due to the relatively few changes in the fighters rosters from year to year. Either way, EA has embarked on providing gamers with a comedy influenced boxing game for Xbox 360 owners, that provides all the hi jinx of the sport fused with some outlandish over the top characters and moves. Welcome to FaceBreaker.

As per usual, you are presented with a few gameplay options, which allows you to jump right into an exhibition fight or tackle the game’s Brawl mode, which is essentially like any other arcade mode in fighting games. There’s also versus modes for two players and of course Xbox Live play. In fact, the whole set up of Facebreaker is one of an arcade game rather than a simulation of the sport with wacky characters. There’s no tutorial mode as such, and no leveling up skills by training and such like. It’s all very no nonsense stuff. You’ll be given a brief overview of what to do during the game’s loading screens, but other than setting you’re opponent to practice in exhibition, you’re on you’re own.

FaceBreaker’s Brawl mode is most likely the best place to start off you’re FaceBreaker career (for how long it lasts) and you’ll either fall into one of two camps. The first camp will be those of you who find the game’s extraordinarily difficult AI (even on easy setting) too much to bear and after an hours play, head straight back to the rental store or shop to return the game – a few brain cells less in the process. Or you’ll fit into the other camp where you’re glutton for punishment and enjoy self abuse… For the sake of review purposes, I’ve had to take the abuse on the chin and wrestle with my sanity and the game to try and make some sort of sense of it all.

In a nutshell, the developers have made a game that is highly inaccessible to the majority of gamers, despite the game looking like it should do. The game’s AI on easy is very tough indeed and instantly cancels out the pick up and play flavor the game should have had. However, I must state, that gamers who have a friend to duke it out with will gain much more enjoyment from the title, than those who are stuck with Xbox Live and the single player experience.

With that out of the way and for those of you with nerves, balls and whatever else of steel, you’ll find a game which offers some semblance of fun, buried within its confines. However you’ll have to look pretty hard, and may suffer burst blood vessels, several headaches, and maybe a broken controller or two to get there.

The basic fighting mechanics are actually pretty decent, simple and somewhat effective, where you have two attack buttons, high and low attacks and two block stances, again high and low. There’s also a special attack button which can unleash a more powerful haymaker style attack at any time and when used in a combo can unleash a more devastating attack, and even a “FaceBreaker” move which can end the fight in an instant.

By holding down one of the attack buttons you’ll also charge up your attack power, but this also doubles up as a counter move, allowing you to dodge an attack. This actually works well against the AI, but for human players, is about as obvious as a brick to the face. However it does work well against players who wish to button mash their way to victory.

Another move available is a counter move which allows you to parry an incoming attack allowing you to unleash a quick flurry in retaliation, that is if the AI wasn’t so good at parrying your parry! There will be lots of occasions where the AI is that good, and basically reads you like an open book, leaving you with a feeling that there’s some real cheating going on here. With hardened soul and determination, plus knowing the strengths and weaknesses of your opponents you’ll eventually get it and begin to comfortably pick holes in the AI strategy. It takes time, but will come, and you’ll be left with a feeling of accomplishment as you easily take down opponents who previously seemed impossible to beat.

FaceBreaker offers a wild selection of cliche boxing characters (12 with some being unlocked as you play), each with their own particular play nuances., including a couple of female fighters. These are all fairly distinct from each other and offer some amusing personality traits when knocked out or at the start of fights. For me, the best feature of the game is being able to create your own boxer using one of the preset templates available or better yet, uploading your own image to the EA website and creating you, your friends and family or anyone else to feature in the game. The options are pretty limited in terms of clothing and body, but you’re able to tweak the head in quite an in depth manner. The process of adding yourself in the game is not speedy, but is certainly well worth it. If you lack the patience or don’t have any photos to hand, then you can browse lists of what other gamers have uploaded and download any from there. You’ll find lots to choose from such as Paris Hilton, President Bush to Sadam Hussein to name but a few. I have to commend EA for this feature, because it’s a very good one and something more games should utilize.

Graphcally, FaceBreaker is pretty colourful and accomplishes what it sets out to do. There’s some neat animations, and the pummeling of faces looks pretty decent to boot. There’s a number of distinctive ring environments and although not as many as a traditional fighting game; there’s enough to keep things from getting too stale, within the confines of boxing. It’s a shame there aren’t more of the set boxers to choose from, however the create a boxer more than makes up for it, despite some unsightly lines appearing on some created boxers.

There’s the usual EA Trax on offer for the menus, which offer tunes to suit whatever mood you’re in at the time, and as usual you’re able to mute the tracks you don’t like. The in game sound is as you would expect from a boxing game, although there’s a distinct lack of true ambiance in general. You’re not going to be hearing too much other than the sounds of leather hitting face and some low in the mix fight music.

FaceBreaker is either going to last you a long time if you get to grips with the game mechanics and enjoy creating new boxers. However, for those of you who just don’t “get” it then your experience is no doubt going to be a short lived one. As mentioned, this game is certainly a lot more fun versus friends huddled around a sofa, than faceless Xbox Live or versus the overbearing AI. For those of you who do get into the game, then there’s enough challenge ahead if you’re after all the achievements.

FaceBreaker is perhaps one of the few games that has driven me to despair. On a number of occasions, my controller was thrown across the room in utter disgust and contempt towards the game. However after extended play and some serious calming down, I found a game that does offer some glimpses of genuine combative enjoyment. If you’re prepared to take the proverbial battering the game offers when you’re learning, and stick with it, then I’d say it’s a worthwhile game to play. However if you like your games to be a little more balanced and ease you into their complexities in a more friendly manner, then perhaps this game isn’t for you. The only real redeeming feature that can be universally enjoyed by beginners and vets alike is the create a boxer mode. However, I don’t think the game is worth buying for that feature alone, unless you’ve got lots of friends who come over to play video games often.