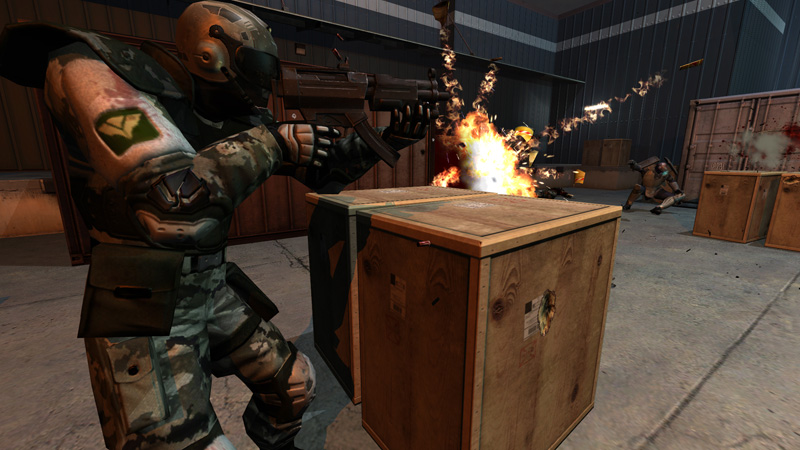 F.E.A.R which stands for First Encounter Assault Recon appeared on PC just over a year ago but has now been released on Xbox 360 as well for all the console shooter fans. FEAR is developed by Monolith Productions who also brought us the critically acclaimed Condemned at launch of the Xbox 360 almost a year ago. In FEAR players assume the role of a freshman to the team of paranormal investigators whose job is to track down a merciless killer along side his army of psychologically controlled troops who have invaded an office building killing all of the occupants. There are a lot of questions unanswered and obvious questions surrounding why this particular office has been attacked and during the hunt for this ruthless killer, players can live out the role of the investigator as they hunt and become the hunted.

FEAR is a first person shooter and one that is perhaps quite simple in its approach as it harks back to the days of the original Doom in its simplicity. However FEAR does offer it’s own spin on things rather than simply being a standard shooter and that is some rather neat AI opponents and a slow motion feature which goes towards creating highly cinematic shootouts. Specifics of the story aside, players jump into the shoes of newbie member of the team whilst they track and hunt down a killer which in a nutshell is an excuse to use the FEAR teams’ movement abilities (hence the slow motion) and a perfect excuse for being able to use real world weaponry mixed with fantasy weapons to dish out as much gun toting carnage as possible. The onus is most certainly on shooting and doing it well, combined with a slight touch of exploration elements thrown in for good measure. More often than not you will be presented with an area to navigate with two obvious and sometimes not so obvious routes to take. Players are allowed to backtrack most of the time especially for those wishing to find every hidden performance boosting item in the game. The levels themselves consist of buildings and semi open areas although for the majority of the game it is set within tight enclosed corridors and rooms such as offices.

There is certainly a lot of interesting things to take a look at in the game and although offices as an example can be quite repetitive in design in the real world in game, the team have done an excellent job of recreating them and the other connecting areas as well. There are plenty of objects as you would expect littered around and these can be interacted with or should I say shot, this might seem like a novelty but it certainly adds to the immersion factor of the game. Things like shooting the lights also has an effect and if its one that is suspended from the ceiling then you’ll witness an impressive effect of light and shadows dancing across the room in a realistic manner. Well, ok the stationary objects aren’t really much of threat other than the odd explosive barrel but the enemies within the game very much are. They come in several forms including heavily armoured soldiers to Splinter Cell Spy rejects with the regular tooled up grunts making the majority of the force. It certainly is a joy to take these guys down as not only are they a vocal bunch where they’ll often give clues about their situation inadvertently but they can be quite tough as well especially the armoured foes. Enemies take cover, move when getting shot at and simply try and use tactics against you to get the drop, which includes hunting you down or hanging back depending on the situation.

The main feature of the game other than its suspenseful atmosphere and creepy demeanour is the slow motion which as you might have guessed can be used for only short periods at a time before having to wait for it to recharge. It certainly isn’t a new feature in video games but seems to work very well in this game. With a simple tap of a shoulder button, time slows down enabling your character the chance to place very accurate shots way before enemies have any time to react. What makes things more satisfying are the subsequent death animations handled by some decent rag doll phsyics in glorious slow motion. For some reason it simply doesn’t get old as you sweep through an area with careful on off timing with the slow motion.

According to many, FEAR on Xbox 360 looks just as good as the game running on high settings on the PC and in my play experience runs extremely smoothly indeed. However this is probably for the most part due to limited numbers of enemies on screen at any given time and the tight nature of the level design. The textures on surfaces seem to be sharp looking but quite low resolution in terms of detail. In the game’s defence there is an excellent effect of bullet holes and dust visible during gun fights and these look quite realistic and certainly add to the atmosphere especially as dust obscures your view for aiming purposes.

FEAR features some excellent dynamic lighting and shadows and as previously mentioned there are times when players can interact with light casting objects to see this in action. FEAR is certainly a dark yet very polished looking game despite being very simple indeed. I encountered no problems with frame-rates or screen tearing and simply put everything runs just right so gamers can get right into to the action without distraction.

The sound in FEAR is pretty good as it features plenty of reasonable voice acting and music. The sound effects are great especially when things like the groans and grunts of shot to pieces enemies is slowed down during those slow motion shootouts. There’s certainly a lot of atmosphere in the game as the name implies and when you combine the aural stimulation of the game’s soundtrack with the dark and confined atmosphere of the levels themselves you can certainly get totally engrossed into what the game offers; although FEAR is best played with the lights out and volume up.

The single player Campaign isn’t the longest by any stretch of the imagination and although there are four levels of difficulty to select I doubt that people other than achievement chasers and hardcore players would want to replay the campaign again just for the hell of it. This is not because FEAR is a bad game, but more to do with the fact that little changes throughout the entire journey through the game as you simply move from one area to the next shooting and doing little else from start to finish. To make up for this there is an Instant Action option to choose four revised levels to try and beat them with the best score; although this is more of the same but with the addition of a time limit. FEAR can be played online with an assortment of team and solo multiplayer game types such as capture the flag and death-match modes. The online plays as smoothly and is as solid as the single player and considering up to 16 players can get it on with some of the maps is great for all out carnage sessions.

For the achievement hunters there are certainly points gained by completing the single player with certain conditions and for these people this adds a lot more replay value to the game.

FEAR is developed by the same team who brought us Condemned last year and with obvious differences in pacing the two games are very similar in design. I would perhaps describe FEAR as Condemned on steroids perhaps. Comparisons aside, FEAR is a solid shooter that is engaging and certainly a lot of fun to play and so if you are looking for a first person shooter and haven’t played the PC version then now would be a good time to give the game a try. Other than the slow motion, FEAR doesn’t reinvent the wheel for first person shooters but does provide an experience to get stuck into from the offset without too many complications. Although saying that, there are times when getting lost can arise and being stuck as to where to go next leaving you scratching your head. FEAR has a decent story, good characters and adrenaline fuelled combat which certainly delivers on all fronts. Is it worth a purchase? I would say so if you are a big first person shooter fan although for casual players they might feel repetition setting in if they try and aim for all the single player achievements which will take several plays to unlock; so perhaps a rental is better for them.