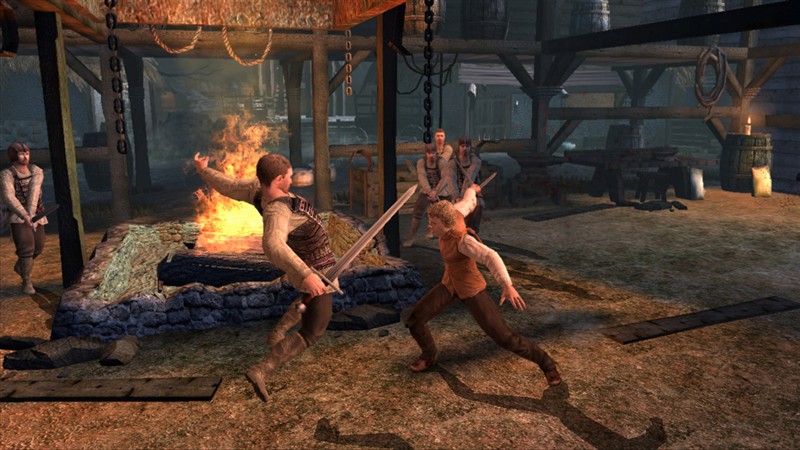 I’ve not seen the recently released Eragon movie and so entered playing the game with semi open arms. After a brief play at last year’s X06 I wasn’t overly impressed with the level which was being showcased but I kept an open mind. To begin, Eragon tells the tale of a farmers son Eragon, who whilst out hunting for deer stumbles across an egg. The egg hatches and reveals a dragon which then becomes bonded with our hero. However the land is at odds as dark forces are abound and thus it’s up to Eragon and pet dragon to make things right with plenty of fiery breath and sword fighting. Eragon, the game follows the movie and combines sword fighting and flying levels as its mainstay.

Eragon, the game is a third person action game where players assume the role of our young hero as he battles all manner of human and not so human opponents. The general idea is to get from A to B in rather linear levels. The camera uses a fixed perspective so that players can focus on the action rather than fiddling around with the viewpoint. The main onus of the gameplay is the sword fighting which allows players to perform simple moves and some basic combos to stun and knock back enemies. There is also a move which allows Eragon to grapple enemies for added damage. For those of you who prefer longer ranged attacks there is the option to whip out a bow which can be used to target distant foes, however to be effective and take out most opponents in one hit, the bow needs to be charged (holding down the fire button before releasing). As the story progresses and Eragon’s character develops he learns to use magic which can be used for solving puzzles or for aiding in combat. It is all rather simple and very easy to get into which is a good thing in many ways, especially for younger players. Other than the sword fighting there are some levels where Eragon rides his dragon for some flight based antics. Here Eragon can steer his dragon and also fire his magically charged bow. These sections offer a different perspective of the game world and are semi on rails with the option to take left or right routes at times. For the most part these sections are pretty dull despite the scenery as the main gameplay element here is basically to steer the dragon whilst hammering the attack button. Still, they do make a welcome break from the sword fighting.

Eragon isn’t alone as he is accompanied not only by his dragon but also other characters from the movie who will dish out punishment and guide him as they see fit. In general the combative element works well bar the odd occasion where hits don’t register or when players get swamped with enemies resulting in getting boxed in for an untimely death. Luckily checkpoints are quite frequent and so you’re never re-spawned too far from where you died. The missions themselves try to mix things up a little by offering all out action combined with some minor stealth elements. What is good is the fact that if you do mess up on the stealth it’s not game over as you can usually fight your way out of trouble.

What is quite impressive in regards to the combat is the level of interactivity within the play areas. Using magic to help navigate the levels is quite basic but fun all the same and using magic in combat is pretty cool especially as enemies can be pushed or pulled over to fall to their deaths or into fire when the levels allow. In typical fashion, as the game progresses more powers become available to our hero resulting in more options to dish out punishment.

In general the graphics for the Xbox 360 version have been beefed up over the PS2 and Xbox versions resulting in higher resolution textures on surfaces. However credit has to be given to the art direction as the game world offers some impressive scenery whether that is forested areas, settlements to mountainous regions. The character models are basic and in my opinion could have featured a little more detail despite capturing the likenesses of the movie actors. Playing the game offers smooth gameplay with no screen tearing or frame-rate issues that effect play, which is a good thing especially when many characters are on screen at any given time.

As you would expect from a movie tie in, the music is orchestral and recorded using a real orchestra. It certainly adds to the cinematic feel the developers were aiming for with the game. The voices in game are all acted by their movie counterparts and thus offer a decent level of professionalism. Other sound effects are as you would expect whether that be the flapping of wings to the clashing of metal against metal. In general the sound is pretty decent overall.

Eragon isn’t the longest of games and offers eighteen levels and one bonus level to mess around with. There are three levels of difficulty to try although I must say for the most part the game is pretty easy even on the hardest setting. There is an option to replay levels once they are completed which means achievement hunters can instantly replay a level to gain the associated achievement which comes from completing levels on normal and hard settings respectively. In my view the game can be completed fully in a rental period if you have respectable gaming skills. To add some bonus to the game there are secret items on each level to hunt for, but again bar a couple these are pretty easy to find especially as the levels are very linear. Finding the items unlocks short movie clips where the developers and actors talk about the game. There is an option for two players to play on one console but unfortunately I was unable to check this out. With no Live play the game isn’t going to last very long and is perhaps over far too quickly. Definitely a game for an easy 1000 points if that’s your thing.

Eragon isn’t a bad game per se but is ultimately an average affair as it offers very little innovation to hack and slash gaming. The production values in general appear to be quite high and it does a reasonable job of being entertaining whilst it lasts. There are a few encounters that are pretty dull especially the boss battles which seem to drag on unnecessarily. To say the game is worthy of a purchase I would perhaps say only if you really enjoyed the film and even then there really isn’t much on offer once the story has been completed. For a rental game on a cold winters day then sure Eragon might be worthy here but if you are looking for a deep meaningful game then perhaps you would be better off looking elsewhere.