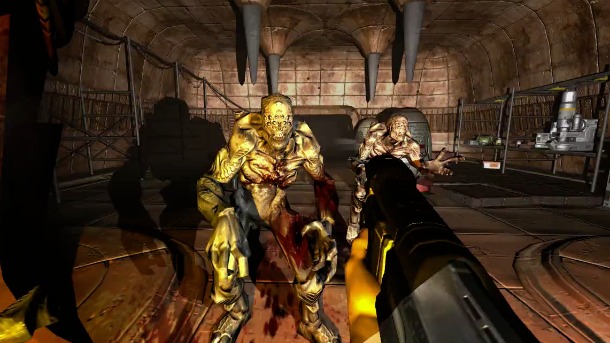 HD remastered games are increasingly looking like cheap cash ins from a consumer perspective considering most simply offer higher resolution display as opposed to having things like new textures and gameplay elements. In some ways, why not. The aim is obviously riding on the coattails of nostalgia in providing an experience from yore, topped up with a more contemporary look, but sometimes this also poses an issue. Nostalgia is different for everyone, and in the case of iD’s Doom 3 BFG will be viewed from varied perspectives depending on whether you’re coming from Xbox or PC  (co op play from Xbox version not included in Doom 3 BFG). However, what’s interesting is to see is a glitch kept in the supposed more polished HD remake one that is shared across Xbox 360, pS3 and PC platforms.

In Doom 3’s campaign there is a specific location where our muscle bound gun toting hero can’t climb a simple ladder (see video). Perhaps his head size has grown to match his ego, making it too tight a squeeze. Either way, it’s present and perhaps fixed using a console command no_clip on PC. However, Xbox 360 and no doubt PS3 gamers won’t have this option and therefore have to endure all sorts of ducking and jumping to tactics to possibly beat this almighty challenge. Luckily it’s not pivotal to the survival of the Mars’ human community and therefore can be ignored. But you know, some people won’t be beaten and will keep trying – even if it is in vain. Perhaps the inclusion of this glitch is a deliberate throwback to the old classic, where iD are giggling to themselves that it’s still there – how’s that for authenticity. Or perhaps – from a more cynical standpoint – iD were too concerned with making a quick buck to actually spend any resources fixing a minor glitch that no one actually cares about.

Still, anyone who encounters the ladder in question, and subsequent glitch, welcome to the peak of nostalgia!