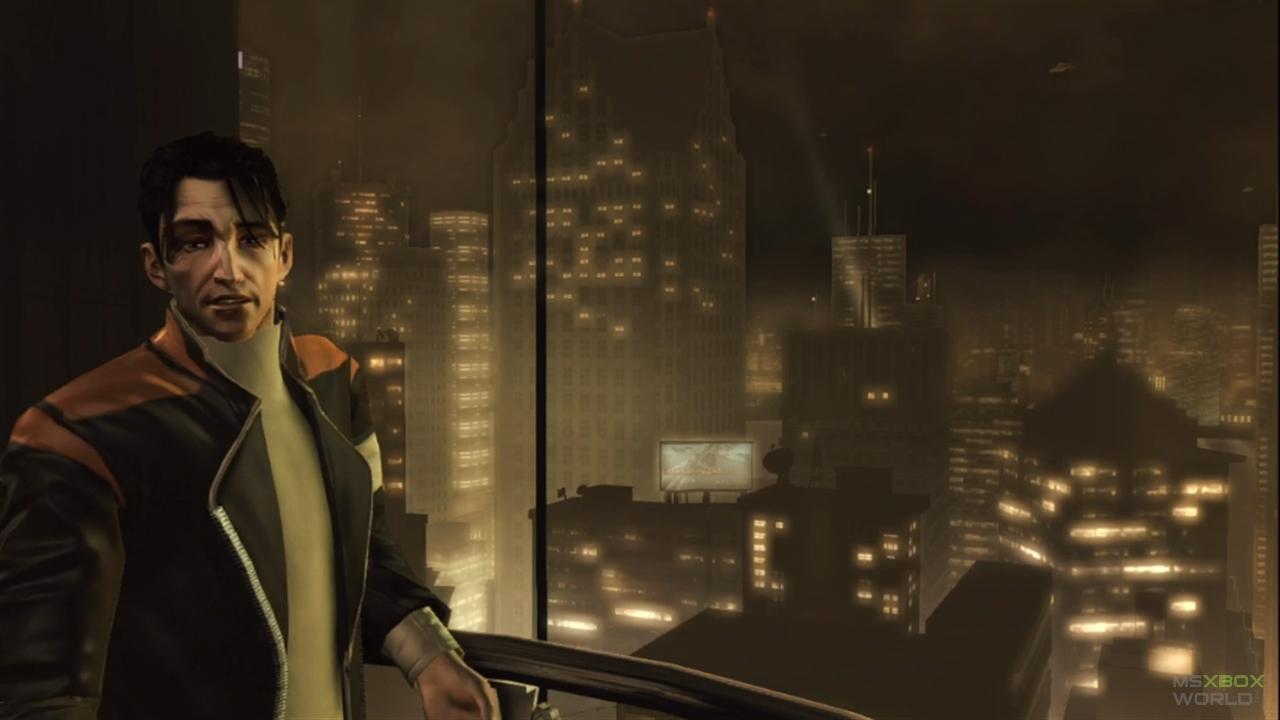 Deus Ex Human Revolution has been waiting in the wings now for several years, first being mentioned as “in development” back in 2007; that’s four years after the Xbox and PC Deus Ex: Invisible War was released by Ion Storm to receptive and perhaps lukewarm audiences. The original game on PC released by Eidos back in 2000 was regarded as one of greatest releases of the time, and garnered much interest from the PC crowd. Fast forward to August 2011 and under the watchful gaze of Square Enix, Deus Ex: Human Revolution is poised to take centre stage. The story Tells a twisting tale of security officer Adam Jensen who unwittingly becomes an augmented being after a brutal terrorist attack leaves him for dead and where the perpetrators kidnap his scientist partner.The world is ablaze with Ridley Scott’s Bladerunner within its inspired imagery and themes. The Deus Ex game world is robust, and with a detailed level of cohesion afforded to its construction. However, does Deus Ex: Human Revolution capture the essence of the original, or does it go one further and surpass it?

Let’s get this out there right away; Human Revolution isn’t your typical action shooting game despite what the game’s opening might lead you to believe. Yes, there’s a lot of opportune moments to get the big guns out and start gunning away at your armoured, robotic and sometimes humanoid enemies; but this only scratches the surface of what’s really on offer. You see, this is a game which prides itself in giving players the choice to tackle various objectives how they see fit, and it’s within this patchwork structure that the game really exudes a bit more cerebral brilliance compared to more mindless shooting offerings. You’re not locked into predetermined classes or routines and are always given the option to switch up your approach on the fly. Human Revolution is perhaps better described then as an asymmetric, layered and part open-world first person action adventure game. The RPG tag associated with the series is perhaps taken out of context here, because although you effectively level up your character and gain XP, the system relies primarily on upgrading skills rather than increasing behind the scene statistics.

So, you venture into the first hour or so of the game and it’s here where you’ll begin to form an idea of what’s expected of you. There’s a fair bit of wandering, looking in rooms, poking your nose in where it’s not wanted, checking computers, and conversing with various NPC characters for a spot of after hours moonlighting. There’s seemingly a lot more to ingest beyond merely following the highlighted objective markers and sailing through the sizeable main story path. Gameplay wise, the act of movement and just taking in the surroundings has been carefully paced, to give you a taste of something new around most corners. You’ll be presented with challenges at every step, and it’s this constant battling of your resolve that makes the experience a compelling one.

Human Revolution offers plenty of action amongst more subdued tense moments, and again, it’s the player choice which dictates what’s returned back at you. Go wading in without a care, and you’ll be gunned down in cold blood pretty quickly, yet be a little more tactical, use guile, and you’ll be popping out from behind cover, performing neat headshots and roaring explosions as you go. On the flip side, there’s some very solid stealth based gameplay on offer, in fact, it’s pretty polished when it works, and well suited to the whims of gamers who like to play in a covert manner. Sometimes the AI can be a little off whereby the line of sight isn’t as cohesive as it purports to be. There’s a chilling sense of success when navigating areas and either going the whole hog to gain the ‘Ghost’ XP bonus or seeing if you’ve got the skills to get the ‘Smooth Operator’ bonus as well as not killing or knocking anyone out. For the record, at the end of mission sections, the bonuses flash on the screen momentarily rather than draw you out of the experience and are the only times you’re able to tell if you’ve been spotted or not during the entire mission – there are other cues, namely enemies shouting expletives and shooting at you,alongside a stealth meter next to the constant mini radar on screen. Some gamers will no doubt seek perfection and luckily can save game at any point.

Going back to the role playing elements, and its clear that your rewards are also governed by player choice. This is the main theme of the Deus Ex design and means that giving players the option to mould their version of Adam Jensen to suit their play is it’s biggest strength. As you perform tasks, complete mission objectives, and knock out or kill enemies, you’ll level up and be granted points which can then be used to boost Adam’s existing augmentations which relate to various body parts. There’s a fair few techs that aid the gameplay from the obvious boosting of armour to things like cloaking and being able to hack computers more effectively – of which there are plenty terminals to hack into. A good example of how the layered gameplay works is as follows:

You are presented with a locked door to a non essential room, which has a terminal next to it that can be hacked. If you have suitable skills in hacking then you can simply hack the terminal and enter the room. If not, then what you’re potentially able to do is find a guard, or even look around and possibly find a code which unlocks the door – you have a choice of killing or knocking out guards and then hiding the bodies. If you’re not wishing to interact with the guards and be a total ghost then you might avoid the room entirely if it’s not pertinent to your current objective, or by looking around might find an alternate entrance (an air vent for example) — each challenge is presented using this same approach and it’s what makes Human Revolution a joy to play.

Deus Ex Human Revolution has a distinctive futuristic edge with its use of foreboding dark and sullen colours fused with big screen projected images, flashes of light amidst towering skyscrapers, vibrant offices and nefarious underbellies. It’s a protracted fusion of a corporate futuristic vision as seen in the previous games and carries it well. What you’ll probably be made aware of from the offset is a distinct orange hue caused by your vision module which highlights interactive objects. This can actually be toggled on and off in the options, and by default when playing on the hardest setting is switched off. Doing so provides a more natural looking game which for some players might be more preferable – it also adds to the challenge.

The game world cannot be faulted really, as there’s an attention to detail not matched in other games. The world feels lived in, and when you’re skulking around the clean lines of offices, you’ll still see elements of chaos scattered around. The game is very much rested in the industrialized quarter where things like open vistas and vegetation seem to take a back seat. What you will witness are stunning views from elevated positions, providing a distinguished sense of scale.

The only real negative issues within the graphical direction is the reuse of regular character NPC models and their low detail which seems to stand out amongst the relative high levels of details you find with the rest of the game’s look; and a lack of variety in terms of the locations Adam travels to. The oppressive slant of corporate and industrialized rule certainly works in context, but makes for a less varied game world to explore when there’s little contrast between one complex to the next despite some renaissance and localized stylings subtly interwoven into the fashions. There’s a few frame rate dips when entering large open areas, but nothing that causes intrusion to your enjoyment.

The audio is top quality in providing a futuristic and emotive aural backdrop to compliment the visuals. The music rests on the Electronica side and there’s enough wonder and intrigue flowing through the speakers that you’ll feel very much a part of the ‘BladeRunner’ styled sound pallet. There’s some decent voice acting from Adam Jenson being the gruff and somewhat emotionless officer, to the more flamboyant performances of the villains. The ambient sound effects are also good and give a sense of depth to the somewhat tight and often concealed locations you visit. Everything simply fits and works as it should do accompanied by the wondrously effective complimenting soundtrack.

Human Revolution is quite the long game and one that will take purists a while to master to gain all of the associated achievements. There’s a slew of side quests to weed out – some more obvious than others – and so many ways to play that a revisit or two once beaten already is certainly desirable and a viable option. There are several endings which can be spoiled by saving and reloading the game at the last checkpoint or left for something to look forward to on subsequent plays. With no multiplayer component to spread resources, you’re presented with a very well rounded experience that delivers heaps of gameplay that can be tackled multiple times and still remain fresh.

We’ve waited years for a new Deus Ex game, had some reservations, played with a preview build, and finally beaten the retail game. It has been a wholly entertaining ride from its predictable and tailored opening, to its dramatic and responsible ending where the compelling nature of the gameplay never ceases to draw you in and keep you glued to your chair. There’s a reason why a game of this quality takes years to make as is evidenced by how polished the design is – the wait has been well worth it.

Deus Ex Human Revolution isn’t a game for everyone, because those gamers looking for a futuristic twitch shooter are going to be disappointed and should save their money for something more suitable. Everyone else who likes a bit of depth to shooting, is a fan of stealth games, or just loved the two previous Deus Ex titles, is going to have a hell of a good time in the Deus Ex world. With so many big hitting games releasing in the coming months, if there’s one single player experience that is likely to be etched into one’s mind more than the others it’s likely to be this one because where other games have you participate in set piece cinematic moments as part of a grander presentation, Deus Ex puts you into the shoes of the leading character and lets you determine how the game plays out. Empowering the gamer is certainly a trait worth shouting about, as empowering is where Deus Ex succeeds and thrives.