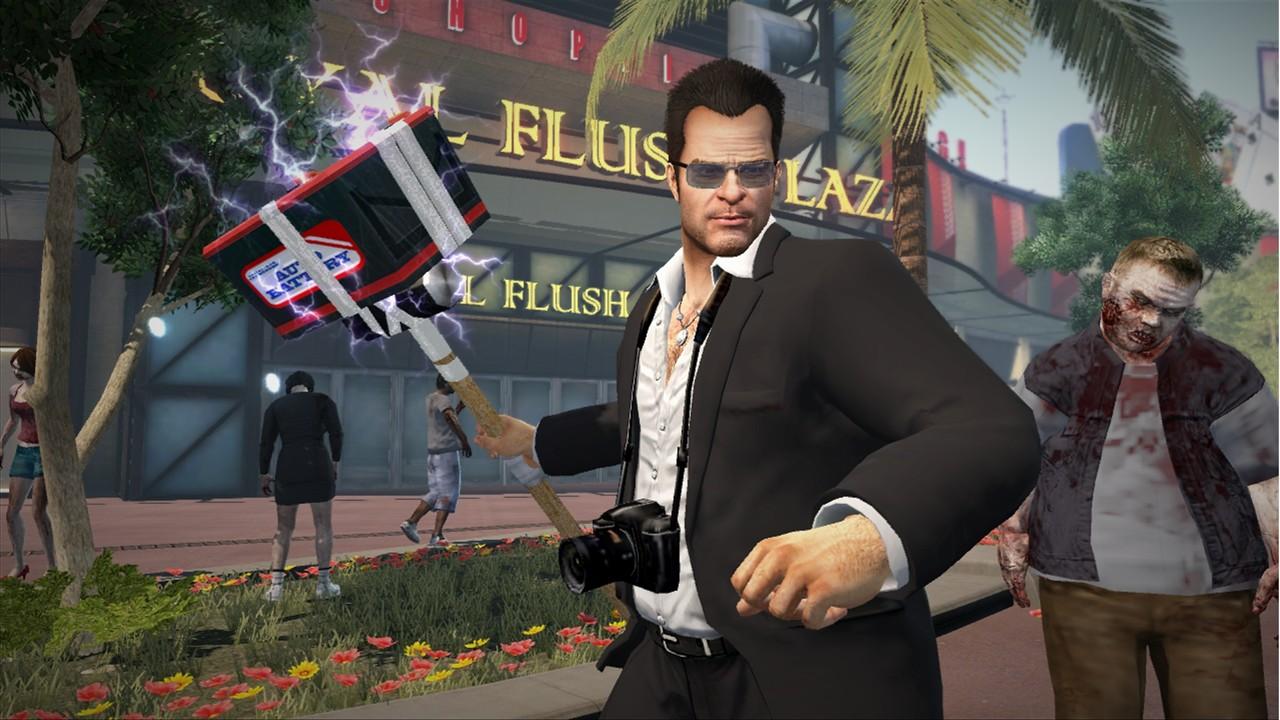 Dead Rising 2 (DR 2) turned out to be a pretty great zombie action game, improving and tweaking from its predecessor and rekindling the flame for mass zombie killings, survivor rescue and dressing up in female clothing. Whilst Chuck Green the game’s protagonist came across determined yet a bit flat, he seemed to lack the charm of the original photojournalist hero Frank West; who appears in one of two downloadable content offshoots. So what Capcom have done in what really seems like a cheap move, is re-release Dead Rising 2 set in the same location but created a new story to go along with the Frank West character. How they fit in with each other is unclear, but it’s probably safe to assume that they are in alternate universes. So, with a very familiar setting and gameplay, the question asked is surely going to be, are the extras and makeover worth getting Dead Rising 2 Off the Record (OTR).

To get this out there right from the offset – making no delusions here – the gameplay is identical to Dead Rising 2 and to be perfectly honest, outside of story based cut-scenes, a new “Uranus Zone” area, and a shifting of some survivors and items, a simple character change is all you’re really looking at. That’s a pretty stark and basic view of what OTR provides, however, there’s some positives to be gained from this, which is obviously why Capcom have made this re-release.

Frank West is a lot more agreeable as a character, has a bit of back story, and offers light comedic entertainment to break up the serious nature of survival. Playing through the main story again felt different enough where the cut scenes really play out the Frank West character that we should be familiar with. So, a good move developing a new story which still is dressed with the most wacky of plots but remains engaging all the same especially being free from the constrains of protecting a daughter.

In OTR you’ll be running, killing, fighting and jumping through the same locations as before and feels a bit repetitive, but the element of familiarity does have some advantages. No longer are you left wondering how the large map connects, which should make navigation feel more fluid, and it does if you’re well familiar with DR 2’s map. What’s more, knowledge of the short cuts also aids in getting around quicker and is a plus for those survivor rescues where the timer is running low. For those players who are new, the trusty waypoint marker and its dodgy directions is still on hand to “guide” you – in the loosest sense – and you’re able to set a marker on the map as well.

So, what is new in OTR, other than the reworked story and facing off against the lowest of the low and psychopathic individuals who were slain in Chuck Green’s world. This time they are back exactly the same, although some new additions and fresh cut scenes to suit make them a welcome distraction. The most prominent new gameplay aspect is the return of Frank’s camera which can be used to take photos of anything. The same rating idea is in force, making you think before you shoot, and adds a layer to the hunting of PP (the game’s levelling currency) that wasn’t included in DR 2. For an added bonus you’re also able to share your finest snaps with the rest of the photographers. There are also some new weapon combos to gain, and what you will possibly notice if you’re more eagle eyed are some placement of items such as magazines and interactive PP elements being moved around or added to.

The brand new theme park area Uranus Zone is unique and has a space theme filled with, aliens, mini games, and interactive elements. It’s quite a large area but feels a bit underused in the main story other than towards the end. The area hosts several new items, some new zombies and even has its own attraction rides.

Perhaps the biggest change of all is the inclusion of a checkpoint system which is most handy for new players. Experienced pros will no doubt have mastered the art of staying alive, and therefore will probably not notice. It is a good move in making the game more accessible, and yet it’s also a bad one for taking a bit of the tension away from a game based on survival.

Outside of the main story there’s a new ‘Sandbox Mode’ which places Frank back into the den free of story and survivors and able to just mingle with the masses and undertake wild and wonderful money gaining challenges. There’s no time limit and to make it worthwhile, the save file is linked to your story progress, so anything accomplished in Sandbox such as PP and money gains is transferred over. Sandbox is a more laid back affair and filled with its own psychopath survivors. It’s clear that playing co-op here is the best way to go as the open playground lends itself better than following a script.

The graphics appear to be the same as Dead Rising 2, other than the new Uranus Zone area sporting its own distinctive look. Animations and new Frank West combat moves are fluid, but what can mar the experience is the appearance of some severe frame rate dips when playing in the more busy environments.

The audio is also of a similar quality to the original, although Frank’s humor and self belief add a more welcoming layer to what could be a forgettable story. The voice acting is reasonable generally, but nothing that screams award winning performance and more deliberately hammy. The music remains the same throughout bar some new additions and menu tracks which hype up the game or drown you with monotony.

There’s a fair bit to accomplish in OTR which will eat away the hours and offer endless possibilities with the new Sandbox mode. You might want to retry the story a few times as you keep your abilities/ level and is perhaps the fastest way to gain PP from rescuing more survivors and killing bosses. The achievements are not as widespread as the original, and a bit more obtainable this time.

A lot of the additions are cosmetic in OTR and even though new elements make themselves available, they are not necessarily game changing inclusions that you’d expect from a new Dead Rising game. Therefore it leaves OTR as an elaborate add-on rather than a new game, yet it has been released separately at a lower price than a full retail game. This seems to be a common trait with Capcom games now, they’ve done the same with their fighting games, and now here. Fans of Capcom games no doubt are pleased at what Capcom are doing – giving fans more of what they want without the lengthy development delays – but the cynical are often left wondering why many of the extras aren’t included in the original game or offered as additional DLC. It’s obvious Capcom are milking their key franchises, which from a fan point of view is likely to be highly favourable, yet at the same time, there’s an undercurrent of fleecing the consumer by stripping away free or compatible extras in favour of revised and separate entities.

That said, in terms of reinvention, Capcom are proving to be the masters and Dead Rising 2’s offshoots have proved just that. With this new product coming to download only platforms, in response to the original question, the answer would have to be yes. Despite the game being a cheap remake of the DR 2, there’s enough here to make it feel like a new(ish) experience. With a price point that’s agreeable, those of you who missed out on Dead Rising 2 would do well to invest here , as a first foray into Fortune City, you won’t get the full experience anywhere else. Fans of Dead Rising 2 will also share the same sentiment as this review but are likely to overlook the shortcomings and enjoy the ride anyway. Anyone else, who may have played Dead Rising 2 and wasn’t taken in, will probably feel a bit let down with what’s on offer here despite Frank’s journey being the more interesting one.

So to conclude, Frank West gets his own game once more, but seems to have kicked the original protagonist to touch. Off the Record is the better game overall when looking at the package but loses a point for not just being unoriginal, but for repacking the same game assets and merely mixing things around a bit.