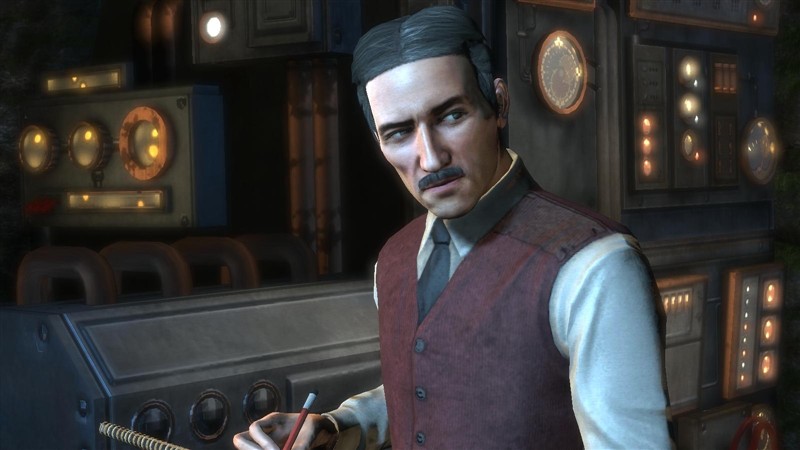 Dark Void is the latest game from Capcom and pits players into a desperate sci-fi world where alien godlike beings threaten the sanctity of Earth. You take control of leading and unwitting hero Will, a pilot who is thrown into the thick of things at the drop of a hat. However, things aren’t straight forward and with a love story woven into all the action, does the game provide enough thrills and spills to make it stand out from the third person action crowd?

Story aside, and to be honest, you can probably ignore most of the story if you choose and just get on down with the on-foot shooting action, which like its peers is fairly polished. You’ll navigate some linear levels and engage in skirmishes with robot like beings. The shooting combat is solid, and with plenty of cover to dance in and out of means the action never gets dull. However, there is some trickery to the shooting, especially with the assault rifle, as the game uses a recoil system (perhaps a little too realistic for such a game) which means tapping the fire button as opposed to going full auto yields greater results. Going for the head also seems to be an effective strategy – failure to adhere to these two very basic rules can make the encounters with enemies long and drawn out unnecessarily.

The shooting takes on another angle once you start jumping down or up to ledges, it’s here where the game switches camera angle to offer a dramatic and very original take on shooting. A tap of the X button will send you up or down to the next ledge and holding the thumbstick to peer over the edge to shoot, or the LT to aim offers more scope to the combat. It’s rather neat seeing your enemies shot up, and fall right past you with such an unusual camera angle. It works.

Not content with using the 3D gaming space in unconventional ways, the combat also changes with the use of a jet pack. You don’t have access to this device at first, but once you’ve reached a certain point in the story, what could be seen as a standard on-foot shooter, turns into a game that is quite diverse. To begin your foray into jet pack heaven, you’ll only have the option to boost jump, which allows for some long distance jumping and a neat slow falling. It’s a prelude to the real meat, and changes the gameplay somewhat as you’re climbing rock faces hunting for plane parts and such like. Once you’ve gotten full control of the jet pack the game then brings out the big guns because effectively you’re given the choice to tackle enemies from the ground, or the air. Throw in some ufo type air targets, and you’re presented with a game that fuses styles to create a seamless blend of air and ground based action. Not too shabby, and Airtight Studios have pulled it off.

Players are able to choose from six main weapons and with collectibles for killing enemies, as well as some hidden in the levels, you’re able to upgrade the jet pack and your arsenal (up to level 3). This makes exploration a key component to the game, and although most levels are linear, there are some more open areas to explore on foot or in the skies, perhaps both. With the game utilizing ground and air combat, there’s an impressive sense of scale in some areas and adds to the feeling of discovery as you find hidden and not so hidden collectibles.

The mission structure in Dark Void, is pretty standard fare, which means you’ll be protecting survivors, escorting prisoners, destroying bosses and generally doing the tasks that are synonymous with flying games. The on-foot sections are also familiar. However, where the game succeeds in keeping things interesting, and fresh is the use of the two game styles rolled into one, and the choice players have of tackling things their own way. Swapping between hover mode and full flight mode is a joy to behold and with things like being able to hijack enemy UFOs makes for some varied moments.

It’s not all joyous though, because the game does have its fair share of glitches or head scratching moments, for example, when hijacking a UFO you’ll suddenly be killed for no reason whatsoever and have to assume a friendly fire incident. When it happens quite often and means restarting back at the last checkpoint it can get tiresome. There were also some other minor bugs that crept in from time time, and in particular some rather unforgiving moments when faced with the auto return when hitting an invisible wall. Disorientated is perhaps too easy a word to describe the madness as you bounce around the screen.

Dark Void isn’t the best looking game on Xbox 360, but does have its moments. Starting off in the moist jungles and then moving on to more arid locales, before heading into dark and tech heavy interiors is quite neat. There’s some great scale on offer, however the aforementioned invisible walls kind of let this down somewhat. The character models are fairly basic and in a sense rather old school, but do the job. Sadly there’s a lack of enemy types, so you will be shooting up the same looking robots from start to conclusion. A little more imagination could have gone into this area. In general the graphics do a good job, despite some odd glitches experienced by few players.

The audio is actually top quality, well the music is, and with the voice of (and maybe getting a little too familiar now), Nolan North as Will, means there’s some high production values. North’s performance is good as are the supporting cast, although the script is perhaps a little predictable. What really brings the game to life is the splendid and epic classical score. There’s some impressive sounding pieces on offer which really drive the action along, offering mystery, intrigue and tribal fusions into the mix at opportune moments.

Dark Void isn’t the longest game to beat but sure is fun and worth going through again to hunt for collectibles and gain some achievements – if that’s your calling. There are hidden journals to track down, and once the game is beaten your radar then displays their locations for you. The game also offers a hard difficulty for vets to try and this adds to the experience. Sadly there is no multiplayer, and to think about the game and how it’s set up, would have benefited from at least a co-op campaign or side missions.

Dark Void is an impressive title that simply falls short of greatness due to being so run of the mill. There’s some truly distinct ideas thrown in here, but the overall outcome is one of familiarity and a disjointed sense of gaming perception. Perhaps with a little more imagination, a better, more engaging story, likeable characters and a little extra polish, the game could have been marvellous. As it stands, Dark Void enters shooter territory with the cross-hair firmly fixed to the forehead. It’s an enjoyable game, albeit quite short, filled with great music, decent voice acting but a lack of flair both visually and in the gameplay. If you’re a fan of shooters and have exhausted all other avenues, then Dark Void will probably keep you entertained for a few afternoons. If you’re looking for the next big thing in gaming then sadly you won’t find it here just yet. The ground work has been done, Dark Void has the potential to be just as kick ass as its more popular shooter peers.