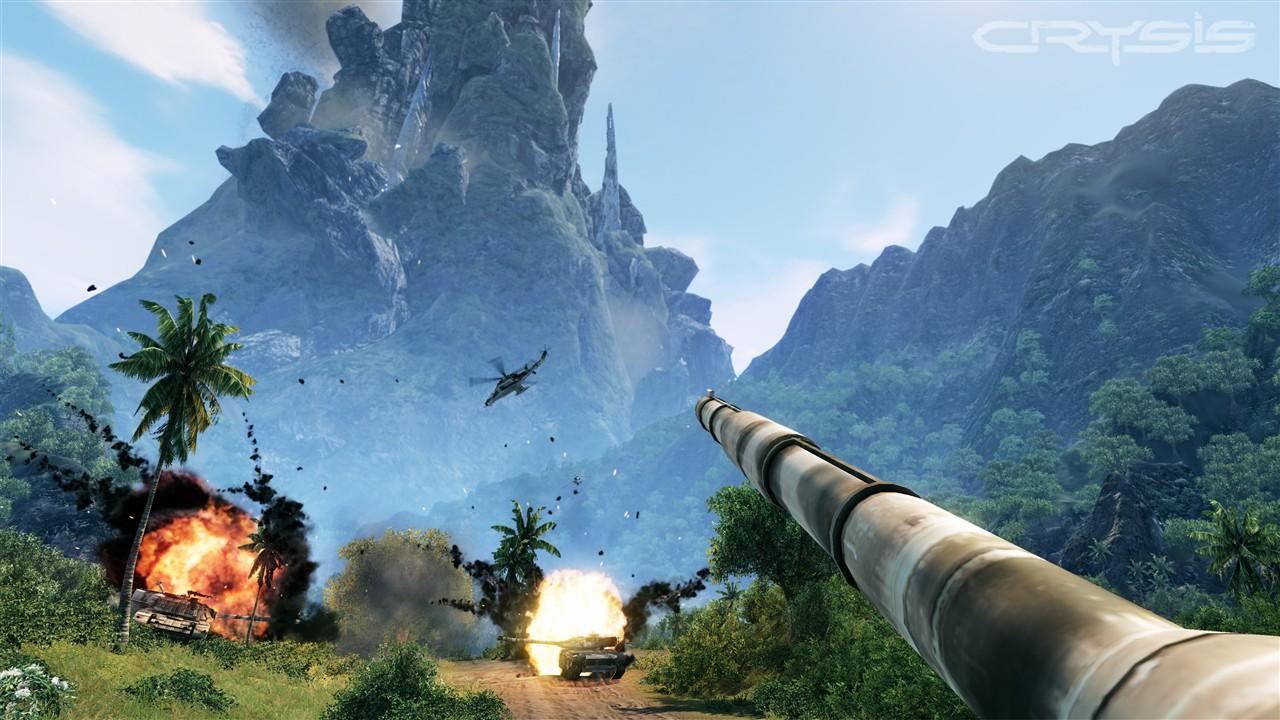 Under the wings of German based Crytek, Crysis released on the PC in November 2007 and was heralded as one of the most testing games for PC graphics capabilities becoming a benchmark test in the process. With lots of graphical might behind Crytek’s very own Cryengine 2 game engine, what was left to ponder is how well the gameplay fared. Although universally recognized as one of the leading graphics powerhouses on PC the gameplay wasn’t really shouted about. Following on from their successful Far Cry roots, Crysis did share many similarities to its forebears. So fast forward to 2011 and following on from the release of Crysis 2 at retail (and now via digital download), we have a version of Crysis on Xbox 360. If you’ve got £15 to spare then the glory that is Crysis is yours, but after being somewhat spoiled by the antics of Crysis 2, how well does the originator stack up to the successor?

The basic controls are going to feel very familiar to anyone who has played Crysis 2, and if not, then here’s the basics.You’re a bad ass military soldier in a fancy nano suit which grants you awesome powers such as cloaking and extensive tactical armour. These two skills factor heavily in how you approach the many situations thrown at you. There’s a pattern that has been with us since the original Far Cry game and one that Crytek are no doubt still learning from and adjusting. You move through an area either guns a blazing, or skulking around the undergrowth making grand use of the cloaking ability. Adopting the former obviously results in more energetic and frantic bouts of gun play – where the armour comes into its own. The latter is a more covert experience, either avoiding conflict if possible or picking off opponents without being detected. That said, it’s pretty tough going if you’re of the less patient type, and really does require some prolonged time investment. The AI isn’t very forgiving, and because the game is catering towards action and stealth, there seems to be an overwhelming presence of distant eyes that can easily spot an uncloaked intruder. This in itself does make being totally stealth pretty difficult, although if your cover is blown, then usually there’s suitable option for cloaking and retreating a little to wait for jittery enemies to calm down.

The best way to approach Crysis’ gameplay is to merely adapt and learn, never affiliating fully with the stealth or action paths and blending their strengths to compliment the features of your hardware.This makes for a far less frustrating experience – save that for the purists who want to sit in a bush for 10 minutes before making a move only to be spotted right away and then having to reload the last checkpoint.

The story on offer is pretty easy to follow and in reality plays second fiddle to the rest of the game’s over the top sequences. The campaign mixes up a ton of set pieces and will have you commandeering a boat and various land vehicles including a devastating tank at one point. There’s really never a dull moment if the stop start formula is agreeable with your tastes and that’s clearly what Crysis does best. It Drenches you in a sea of active foliage one moment, and then under the cover of darkness has you riding up river in a speedboat whilst being bombarded from all sides because the enemy really doesn’t like you.

Crytek have proclaimed that they spent a lot of work tweaking the game’s look for consoles, and much like its predecessor there are times when the game and its glowing yet sometimes oversaturated world does look incredible. Amidst the solid looking textures, dynamic lighting destructible scenery and smooth edges, there’s a bit of lower quality texture work which seeps into view marring what could be an extraordinary looking game. The draw distance is no where near as sharp or focused as the PC version and in general looks a bit muggy in places.There are also some issues with the frame rate at times which isn’t as consistent as it could be. Crysis is about moving forward though, and this means not lingering on the microscopic details but taking the eye candy in as a whole. From icy wastes to humid and detoxifying jungles, Crysis dishes up a fair bit of variety which in turn all act as commandeering showcases of the Cryengine at work.

Aside from the pretty visuals and interesting plot locales, there are some major flaws with the AI in this particular Xbox 360 version. Other than acting in odd ways once alerted, the AI tends to get stuck in the scenery, or stands on the spot bouncing up and down. Even of the very few boss encounters you face, they are not immune from the same problems. It’s a big shame that aside from the obvious good looks, the AI wasn’t given the same level of attention lavished upon it resulting in some jarring moments that seem in opposition to the rest of the game.

The audio offers the hybrid mix of natural ambience coupled with the sound effects from your nanosuit. The shouting, gunfire and explosive elements are all wrapped up neatly in an orchestral package that keeps you in tune with the action. Stealthier moments enjoy a more sullen and tense contrast and therefore works perfectly with the style of the gameplay. The voice acting is reasonable, although expect plenty of hammy performances and a ton of Korean accents. Luckily the game allows you to lose the dodgy accents in place of real Korean when upping the difficulty which is a neat extra to have.

The overall sound effects are pretty solid, featuring the ambience you’d expect from jungle and various other environments, to intricate details such as the echo of distant gunfire and the muffled cries of allies. It’s a well rounded aural assault and is directed in a fairly polished manner.

With no multiplayer to sink your teeth into, you’re left with a single player campaign offering ten missions and about a day’s play on default settings. Once the campaign is beaten, you’re encouraged to try again, upping the difficulty and aiming for greater things against increasingly difficult odds to beat. Whether you’d want to is another matter, because as a shooter, Crysis doesn’t feel like it offers much more on subsequent plays. Sure you can try sneak past camps and enemies instead of going Rambo and vice versa, but it still feels the same. With few customization options and only a handful of achievements to aim for outside of merely completing missions, there’s no real reason to return unless you’re a completionist and even then, two plays and you’re done.

Crysis on Xbox 360 is a valid attempt at giving Crysis 2 fans a bit more of the series, though what does seems weird is why wasn’t it released prior to Crysis 2. simply put, Crysis 2 is the better game, and with features seemingly removed, it feels odd going from one game to the other and expecting the same nuances to be present.

Aside from gamers who loved Crysis 2, if you are new to the world of Crysis, and are looking for a decent shooter that is more fantasy than military, then for fifteen is pretty good value for money.

For all its airs and graces, and taking away its glorious looks, Crysis does feel like a pretty standard first person shooter. The abilities are integral to the gameplay, but with unfair odds against stealth players means that it’s tough deciphering what Crysis wants to be at times. That said, what is on offer during the campaign is a roller coaster ride of intriguing and well thought out scenarios, making it well worth the price of admission and despite the lack of any fundamental extras expected from an FPS these days.