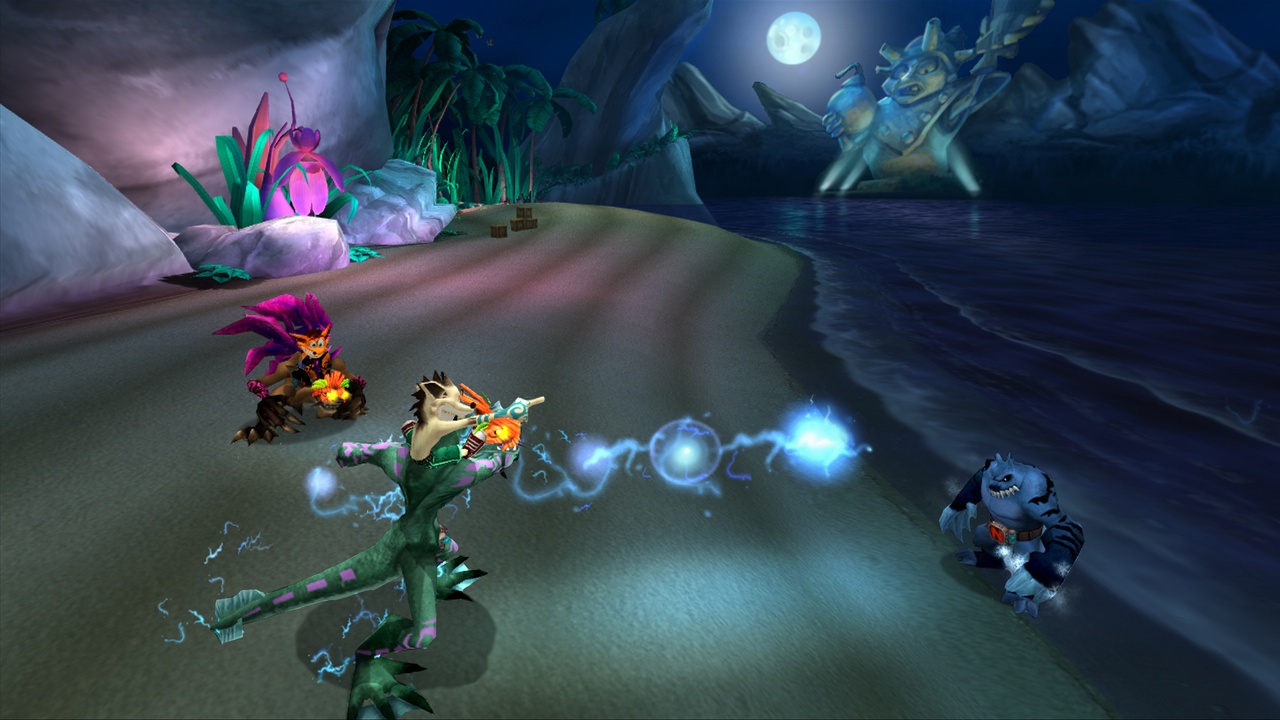 The developers Naughty Dog, who originally created the Crash Bandicoot games have moved on to pastures new and have partnered with Sony (for the time being). However, the legacy of the Crash Bandicoot games lives on, as Xbox 360 has its first taste of the madness that is contained within these games. Sure, they are platforming games at heart (although we have had a taste of racing too) but the character has stood the test of time amongst the not so cute and cuddly characters such as Master Chief and Marcus Fenix, to name but a few.

Platform games have always been around and with many movie tie in games opting to incorporate their features within their own games, it’s sometimes hard to distinguish what is a platforming game and what is an adventure game.

Crash of the Titans follows this trend and whilst it features some classic platform elements, it does have an adventuring/fighting slant to it as well.

Crash Bandicoot is, as the name suggests based on the real life animal the bandicoot, despite not really looking like one at all. In game his arch nemesis Dr Neo Cortex is up to his usual tricks again and captures Crash’s sister (another bandicoot but with more curves – if you know what I mean). As always, Crash the hero alongside his mask helper steps up to the challenge of not only rescueing his sister, but once again thwarting Neo Cortex’s plans. It’s a typical scenario and one that has featured pretty much in most of the series games thus far, but this time there is a distinct difference when it comes to the gameplay.

Crash has always been able to attack enemies in one way or another, and whilst each level in Crash of the Titans requires you to go from A to B in a rather linear path, there is a whole new element to the combative skills Crash possesses this time. Possession is the key word this time, as Crash is now able to take control of the many enemies in the game and use their attacking skills. This lends itself to some frustrating moments as you solve some minor puzzles using specific creatures, but is also a lot of fun dishing out damage and unleashing attacks on more powerful and not so powerful adversaries.

Crash himself has an almost role playing game (RPG) set up this time, as by collecting Mojo (blue orbs dropped by fallen foes or stationary objects when destroyed) he can now effectively level up to increase things like health, spin attack duration and slide time. Sadly or maybe simply, the player has no access to what areas can be upraded as it happens automatically, but it is rather good to see your efforts in collecting Mojo rewarded. As mentioned, there are numerous enemies to gather Mojo from as well as objects that can be smashed open. The collecting of orbs, coins, Mojo or whatever seems paramount to these kind of games but in this case it feels very rewarding to unleash your powers on unsuspecting, unchallenging bits of scenary.

The leveling up is cool, the possesion of creatures is even “cooler”, the beating up wacky minions to progress is also very satisfying and the general jumping around to navigate the levels feels just as it should, so no complaints there. My only real gripe with the gameplay is that it does feel somewhat familiar, couple this with the linearity and ease of play and Crash of the Titans doesn’t really offer suitable challenge both physically with the fingers and mentally on the brain for competent gamers.

Obviously there is an art to how the game plays, especially the game’s combat system (which is very simplistic) and maybe not all gamers are going to get this right away. When you do though, it does become a breeze and if it weren’t for the fact that the game sets three tasks to complete to get a gold rating at the end of the level, some gamers might feel compelled to just hammer the X button over and over throughout the 20 levels.

Maybe I am being a little harsh, as there is room for some experimentation with the creatures you possess, but as I said the simplicity of combat doesn’t really allow much deviation from the very basic attack moves available. You can try and accomplish mad combos but for me I found that collecting the most mojo was the best goal, rather than simply aiming to complete the levels.

Graphically, Crash of the Titans is a big let down I’m sorry to say. It seems that as a multiformat game that is also on last gen systems such as the PS2, means that what we have here is a high definition version of an Xbox game (sort of). Looking at character models and textures (surfaces) and you can instantly tell that no love was poured into creating a game that does the Xbox 360 justice. When you compare to game’s such as Kameo, there really is no contest. Looking beyond the graphical prowess the game seems to lack, there is some decent character designs and interesting level design, but at the end of the day people paid their money for a “next gen” playing experience and therefore like me, are going to feel somewhat let down by the general look of the game despite whether the game has some interesting qualities.

The in game sound is actually very good and whilst there are a lot of parodies of other gaming characters with some of the levels and speech, the general vibe from the sound is one of some much needed humor. Maybe this detracts from the last gen graphics, but again sound isn’t something that screams “Next Gen” in a big booming voice. There are some quality voice overs used and the script has some genuinely funny moments that will cause you to laugh out loud – or at least raise a smile. The music is actually very well produced, and whilst there’s a somewhat serious tone to it, on the other hand the music is as wacky as the rest of the games premise. I actually loved the music and felt it perfectly fitted the game; so a huge thumbs up to the sound guys there.

Crash of the Titans isn’t going to take competent gamers very long to finish, and more importantly to max out their character and accomplish the highest ratings on all levels. That said, there are some achievements that require you to replay some levels and combined with the additional Hard mode that resets your stats, means that effectively there are several plays required to get all 1000 points. If you are a gamer who cares little for achievements, then perhaps this game isn’t going to last you as long as you would have liked. I would suggest starting out on Hard mode just to lengthen the overall experience. There is also the option for a second player to plug in their controller and have a play as well and this doubles the fun if you are the sharing sort of player. Sadly this option is not extended over Xbox Live, which is a shame as the game could have benefited from this feature.

Crash of the Titans is a very fun game, full of humor and some neat touches despite being a somewhat familiar experience. The possession feature is rather cool as are the levels and their design. However the graphics aren’t going to win any awards and neither is the brevity of the game, and so this is more than likely going to appeal to the younger gamer more than those of you who like a little more brain exercise. I have enjoyed the game, but sadly it’s not something I will ever feel compelled to return to in the future. There simply is not enough “Meat” here to cater for older gamers who undoubtedly will breeze through with their eyes half shut, whilst eating, smoking and watching another TV at the same time. The developers need to learn that in this day an age, games that are made for older systems aren’t going to cut it on Xbox 360 despite having a high definition sheen added. Crash of the Titans should be great fun for younger kids and sneaky achievement hunters who pack the kids off to bed or boot them off for a quick play before they are discovered!