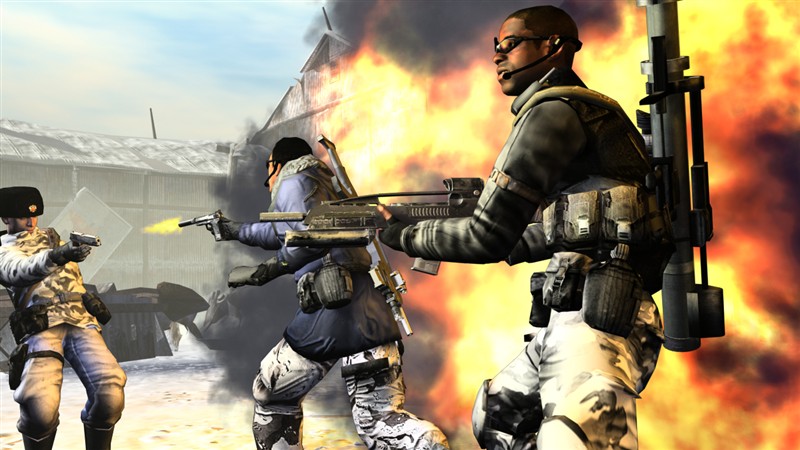 The Conflict series started out years ago, and enjoyed relative success with its war themed campaigns in various hot spots around the globe. The games were third person affairs and offered up to four team mates to control to accomplish tasks. Conflict Denied Ops is the latest game in the series and the first game to appear on this generation of consoles. Eidos have taken on the task of publishing the game which has ditched its third person roots in favor of the Xbox stalwart, first person viewpoint. You control a duo this time of veteran soldier Graves, and his not so experienced side kick Lang. The two make quite the odd couple, with a distinct nod towards duos such as Mel Gibson and Danny Glover in the Lethal Weapon movies.

Conflict Denied Ops offers several modes of play for both lone players and those with friends on and offline. The campaign takes the duo to various locations across the globe, where they are able to infiltrate, shoot, destroy, maim and kill, before extracting to safety. The main onus of the single player game is the option to hot switch between Lang and Graves on the fly (pressing the B button). There’s a distinct difference between the two characters, with Graves being typically well suited to long range attacks using his sniper rifle, and Lang more up close and personal with a belt fed automatic machine gun. The way the levels are constructed, means you’ll have to switch often to get the best use out of each character, as although they both can switch roles, progression is much easier if the right man for the job is used for any given situation.

Players can also dish out commands to the team mate not being controlled, which opens up opportunities to create some flanking situations. What is more, each character has their own specialized field of expertise beyond their weapons proficiency. Lang is able to hack computers, and Graves in the team demolitions expert. This means at certain points you’ll have to make sure that the right man is ready for action if you are to progress.

Being killed in Conflict Denied Ops is not necessarily game over, because if your team mate is alive you can inject your fallen comrade, and within moments he’ll be fighting fit once more. The trick is to make sure that you clear the area before attempting to revive a team mate, if both of you die then it’s back to the nearest checkpoint for a restart. On the normal difficulty at least, you can revive a fallen team mate as many times as required so it’s not too frustrating like some other recent Eidos game I won’t mention. There’s also a time limit in which you have to revive a team mate, to add some urgency to proceedings.

In Conflict Denied Ops, the combat comes on thick and fast, and as either character you’ll have to think fast and shoot faster. The enemies will rush at you, move from cover to cover and deliberately push forward if you are healing (which is somewhat cheap). However, during the campaign, you are able to commandeer a tank and mount gun emplacements for a little bit of variety and some payback.

One of the main features of the game is the puncture technology which is actually quite good. This technology means that things like boxes and other objects can be shot and destroyed; meaning taking cover behind them has to be thought out in advance. Solid objects like brick or stone is guaranteed decent cover, but other objects could leave you open to incoming fire. The same works with the enemies too, and with plenty of explosive barrels and canisters lying around, means you’ll be able to set off some rather big explosions to take out dug in opponents.

From my description above, you might be thinking that every thing sounds very peachy, and Conflict Denied Ops is a great game, you might even be tempted to rush out and buy it (if you’ve not played the demo). Well hold your horses, because to do so might prove a costly error. The graphics are actually very poor, and for your buck you’ll get terrible animations, very poor texture work, incredibly lame hit detection (with weapons that are sickeningly underpowered and inaccurate). Whilst the action is fairly decent, alongside the puncture tech, everything else just feels bland and last generation, to the point that it’s actually horrifying to think that the game was released looking like it does. There really are no redeeming features when it comes to the game’s graphics; I would go as far as saying it’s one of the worst looking games on the system.

The sound is also very poor, as both the characters sound like cliched idiots on crack. Graves (who is referred to as a redneck) sounds like one, and has about as much personality as a blow up doll. Lang is just your typical Ebonics speaking black guy, and it’s shame that black people are still portrayed in this manner, it’s not big and it’s not clever and certainly shouldn’t appeal to the masses who have seen this all before years ago. I really felt no affiliation with the two characters and couldn’t give a damn about their plight. I guess it’s a bonus the game switched to first person, so that only one is in view at a time.

The music is reasonable and offers a far greater performance than the rest of the swearing heavy audio. This is certainly not a game for youngsters and I hope retailers remain aware of this fact.

Conflict Denied Ops offers a single player campaign that can be beaten quite quickly, certainly within a rental period, however you do have the option of additional levels of difficulty to mess around with. What’s more, the single player campaign can be played in system link, split-screen or via Xbox Live in co-op, which adds more longevity to the experience. There’s also some adversarial modes thrown in for good measure if competitive play is your calling.

Conflict Denied Ops is a bad game, there I said it. No amount of glossing over or hyping the game is going to change that. There are just too many things to dislike here; unimaginatively designed lead characters, terrible AI, bland locations, poor graphics and dire sound, add up to make a rather monotonous playing experience. There really is very little fun here, and when you couple this factor with some truly cheap moments that will make you cuss and scream with anger, this certainly looks like a game that is frisby or mug mat fodder. Ok, maybe I am being a little harsh, heck no I’m not – but I’m sure some gamers will find a little enjoyment from what is on offer here (like those gamers who just have to like a game simply because they spent money on it). It’s true that not every game can be a AAA title, but when games are released that are as poorly crafted as this one, then the mind boggles as to what Eidos are thinking, and more importantly what the developers are thinking producing a game that clearly belongs in a time and place best forgotten. If you like military shooters, then avoid like the plague. If you like HD gaming on Xbox 360, then ignore this title because your Xbox 360 will start to change colour and might pull a sicky on you.