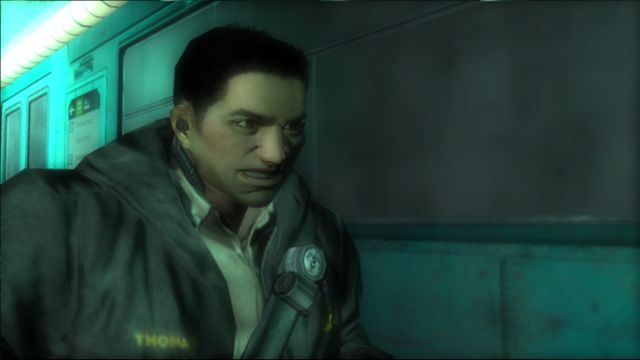 Horror games have come in a wide variety of forms over the years with the likes of Silent Hill and Resident Evil probably being the most recognised of the genre. There have been a few titles that have opted to provide a first person experience (through the eyes of the character as opposed to seeing an on screen character) and Condemned fits neatly into this category of gaming. What we have here is a psychological thriller which sees the lead protagonist (an FBI agent) being wrongly accused of murder. This forces the agent to go rogue and attempt to solve the case to clear his name all the while avoiding capture by the police. Not only does he have to avoid the police but also the city’s lowlifes who don’t take kindly to FBI agents snooping around.

The first thing that you will notice when playing Condemned and during the game’s opening is how dark everything looks. Panning the view around the opening scene, what little light available kind of beckons you to come closer. Most of the game is set in rooms and narrow spaces and as mentioned are mostly dimly lit or dark places. Well this situation is temporarily addressed when you are able to use your flashlight and really you must say a big hello to the flash light as through 99% of the game you are most likely going to be needing its services- a most valuable tool in this game. Another thing you might notice here is the general speed of the character movement; for those weaned on more speedier pastimes might feel a little sluggish when first playing the game. However this is also temporarily addressed with a sprint button which allows short bursts of running speed. Therefore players have to assume that the normal speed is in fact a man taking his time stepping into the unknown; and to be honest do you blame him? Well there is good reason for such cautious behaviour in the sense that the next turn could lead to a smack in the face with a blunt object or even getting shot at point blank range!

Now in other games, players might be used to the invisible absent minded ammo man who loves to drop ammo boxes in the weirdest of locations for you to stumble upon and then add to your infinite sized pockets. Well Condemned is more realistic which means ammo is like gold and once a clip has run out then the only use for a firearm is as a makeshift club. In the game’s defence enemies will go down in one to three shots depending on the weapon used and where the bullets hit but also the butt of a handgun is actually quite effective if used correctly. Condemned isn’t only about firearms and in fact due to their scarcity players are forced to find other means of defending themselves against the undesirables of the city. This means that some imagination must be used by the character and use what is available to hand such as bits of wood, pipes, crowbars, shovels, axes and many more including the arm of a mannequin! The melee combat works very well and is simple to get to grips with. One trigger swings and the other blocks; with the blocking however you need to time this with the blows from your adversaries. A successful block usually means being able to get a quick counter attack in. For me these encounters and yes there were many throughout the game were usually my character moving back and forth, blocking and then attacking or looking for openings and then charging in with a counter attack. These moments are genuinely tense and equally rewarding when you can take out one or more opponents with successful swipes around the head. The enemies in the game who are high on drugs (as usual) and not in the mood for cops sniffing around can behave in intelligent ways and will often try and run away when injured or if they lose their weapons run off to find another. The enemies will also work in teams and will sometimes use a person to lure you to one location as another attacks you from behind or simply jumps out from behind a pillar with a nice slap around the face with a bit of 2×4 (including nails)!

Combat aside, Condemned also features some gathering of data as evidence from the crime scenes and when tracking down murdering scum. During these moments, your character will sense when the forensic tools need to be used and the screen will prompt you when to use. Then it’s up to you to take photos or gather a sample or whatever. However these sections whilst breaking up the main portion of the game and giving a little more depth to the storyline are nothing more than simple point and click distractions. There is no real detective work required here as the game simply holds your hand all the way. I personally would have liked to see more searching a location for clues rather than being told when and how or at least an option to switch forensic help off.

The graphics are actually very nice looking despite the dreary dark nature of the locales in the game. There is plenty of detail to look at in each area and with a neat physics engine being used means you will most likely be able to interact with the many objects that litter the levels. The character models look great in some moments especially the fighting animations and then not so good in others, such as during the game’s cinematic sequences. There is a major play on the light and dark nature of the game’s graphics and this lends itself to some rather excellent light and shadow effects. For those keen on graphical gore then there is a reasonable amount on offer here. However due to the speedy nature of the game means that it generally happens in an instant and then you are too busy watching out for more unseen assailants rather than looking at your past victories.

Mastery of sound effects is something Condemned has as it is always keeping you on edge and making you wonder what is lurking beyond the next corner. Distant noises can be heard above and behind you and it’s this eerie uncertain soundtrack which compliments the game play perfectly. Sometimes even silence can be equally disturbing as lots of noise. Sound effects during combat are quite interesting and feature muffled phrases from your enemies along side grunts groans and cries of pain. The sound of metal against head also has a nice ring to it! The in game music didn’t really appeal to me that much here and I guess for a reason was very background and non intrusive. In the respect of this game then I would say it’s a good thing because music will often warn you of impending danger in games! The voice acting was actually quite good despite being a little emotionless at times.

Condemned is a strictly one player game and whilst it probably could have benefited from some dark multiplayer mode as it stands once you beat the game then you have pretty much seen all that there is. Yes you can try and unlock achievements by replaying levels, finding dead birds and metal pieces that are hidden. You can also replay the game on the Hard difficulty as well but to me the main experience of the game is when you first play.

Condemned Criminal Origins is a welcome game to make the launch of the 360 and offers something different to the other games on offer. Condemned is naturally full of suspense and will no doubt make many players jump in their seat at times or genuinely feel anxious whilst playing. It’s great when a game can accomplish this especially for the right reasons; and this puts Condemned as a must play launch title. It’s gritty, it’s destructive and it’s dark but most certainly it is a highly involving and entertaining game.