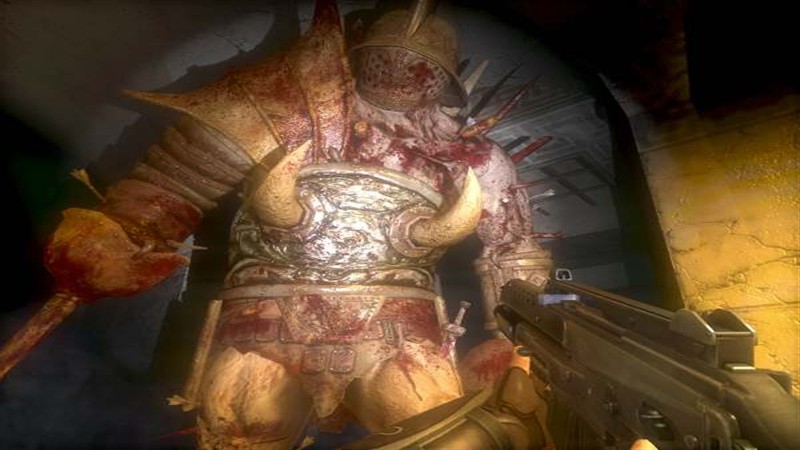 The Xbox 360 winter lineup appears to have a vast number of first person shooters to sink your teeth into, and whilst many gamers have sampled the delights of Halo 3 already, it’s interesting to note that there is in fact life after Halo 3! Take Clive Barker’s Jericho for example, it shares the first person viewpoint but as a game, plays very different to Bungie’s all encompassing product.

Jericho sees you take control of a 7 man squad of paranormal investigators, who have been tasked with sending an evil firstborn (created by god before mankind and then banished) and its minions back to where they came from. The uniqueness of the squad, and in fact the game itself is that the 7 man team (called Jericho) each have their own characteristics that go way beyond the norm.

Jericho, the game is at heart a squad based shooter where you have direct control over each of the 7 team members. The way this is handled, is early on in the game, the team leader Ross is killed by a demon but his spirit lives on and allows him to possess the other 6 members of the squad (with their permission of course). This aspect lends itself to some rather unique gameplay, due to the fact that whilst each team member has conventional weaponry, their exclusive abilities make for differing moments depending on how you, the player conduct yourself. There are some sections where you are somewhat forced to use a specific character to progress, but this is usually for a very small segment, which means you are then free to choose once more who you want to control.

In my experience I found it quite hard to establish who was the “best” character to perhaps, spend most time in control of. By the middle of the game and with some experimentation I found that they all had their pros and cons. Take the character Church for example. Now she is more like a deadly ninja, armed with a automatic pistol and a Nodachi (sword). I found that she was pretty weak against many of the enemies, and with her weapon feeling like a pea shooter compared to the other characters firearms. However, her special blood scribe ability evened the odds against the most toughest of opponents, thus making her extremely useful. I didn’t at first get this until I had experimented a little more with each team member, and I think it’s worth noting that if you approach too rigidly (as in a normal shooter – ignoring the abilities) you are going to miss these neat little nuances with each character.

There’s also another element to the gameplay in that you have some command over the rest of the team when you aren’t in direct control over them. You can order them to hold or advance with you, as well as ordering them to specific points in the near vicinity. This for the most part works well but I found that they would disobey and follow you should you try and stray too far away as a lone unit. I actually found this quite annoying, as it would have allowed you to try your best to use a specific character unaided.

Looking at the AI, the team mates do a reasonable job of firing at enemies and generally taking cover, although at times there were some weird behaviors and suicide moments where they wouldn’t move in such a flexible manner. This resulted in a lot of deaths which meant I had to go and revive them (sometimes resulting in my own death). The character Rawlings, is also able to heal downed friendlies, but I felt his programming seemed to focus on healing others too much, especially as it would cost him his own life at times.

The game features some impressive graphics from start to finish and as a gamer, one has to remember that this is a horror game, and therefore isn’t going to be rich with colour. The enemy design in particular is very unusual and quite gruesome at times but they really do look the part and in keeping with what you would expect from the mind of writer Clive Barker. Some sections are pretty dark, and whilst you have a trusty flashlight available, even then it can be hard to see properly using the default gamma setting. luckily you are able to adjust this in the settings and so it’s a good place to start should you find things a little too dark for your monitor/TV.

The game thrusts the team into a variety of time zones where evil atrocities took place throughout mankind’s history. The imagery is quite striking and really draws you in; such as disfigured people hanging from crosses, moaning until you put a bullet in their heads during the Roman era!

One thing that I felt could have been improved in relation to the overall darkness of the game, were the flashlights from the other members of the squad that you weren’t in control of. It seems that only the character you were in direct control of would use the flashlight, and with dynamic shadows being cast, it looks pretty impressive. It would have looked even better if the other team members were casting their lights everywhere also. I guess this would pose a technical nightmare to program hence its absence from the game.

The sound has been very well produced in terms of eeriness and ambiance. However the voice acting felt a little dry at times. I actually hated the Texan sounding Rawlings character, as he simply sounded way too out of place and his delivery wasn’t so hot either. One thing I found really neat was the heavy breathing after taking one too many hits. The music was suitably spooky and had obviously been produced to a very high standard. The music which plays through the credits is an excellent piece and well worth listening to just for the hell of it.

Jericho isn’t the longest of games, but again isn’t the shortest either. The difficulty is also questionable, as I found that there was little difference playing on Hard mode than there was on Normal. I think for achievement hunters the most challenging element is beating certain levels without being incapacitated.

Sadly the game has no co-op options, which would have given the game a far wider appeal. The lack of a tacked on Multiplayer is in some ways a good thing, but again its inclusion would have appeased players who like these additional modes.

In terms of replaying the single player, I am not so sure, as there is little incentive to do so bar trying out different characters. Like I said earlier, if the team allowed you to go lone wolf more then this could have greatly added to the replay value.

Clive Barker’s Jericho is an excellent gameplay experience the first time through. The characters are all unique, the enemies are perfect for pumping lead and whatever else into. The story is gripping and typically Clive barker, but never too complex to leave the player wondering why they are doing what they are doing. I really liked the squad element, but I still feel some refinement with the mechanics and AI would have improved it further. If you are tired of Halo 3 and are looking for a very different shooting experience, then I say Jericho is well worth a look. Sadly the game can be completed in a rental period, and I do question the longevity of the game. If you are a fan of Clive Barker’s works, or in fact a horror fan, then Jericho should be a priority for you.