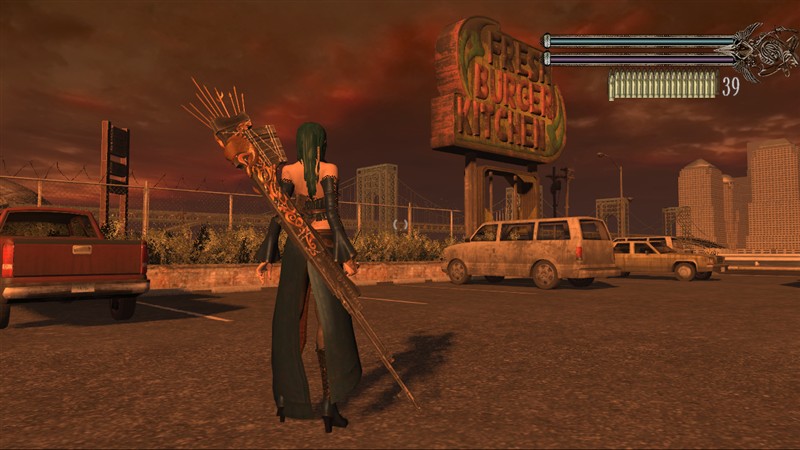 Bullet Witch tells the bleak tale of a world over run by demons and with the human population on the brink of extinction. After many disasters that have eaten away at the Earth’s resources and killing millions of its inhabitants the last remaining survivors are tasked with battling the ensuing demonic hoards in one last chance effort for survival of the species. Well, regular human powers aren’t really enough for this task which is where you come in playing as the lovely but often sullen, Alicia. As Alicia, a tenacious sort of character you would expect from a video game; you are granted some unique magic abilities to aid you in your mission to drive the demons back to where they came from. What makes her perhaps a little more unique is the fact that she is armed with a variety of huge guns, hence the name Bullet Witch.

Bullet Witch is a third person action game which is set in a seemingly post apocalyptic Earth. Your job is to simply go through each level killing the low level demons who are terrorising the areas and generally kick as much ass as possible; whilst constantly remaining gracious and very feminine. The premise is rather simple as you wander the rather war torn looking environments shooting and killing everything that gets in your way. To spice things up a little at times you will come across some boss characters which in general are massive creatures that look very intimidating. However with careful aiming and perhaps finding a weak spot these can be killed fairly easily.

A| lot of the levels are quite open, bar the odd barricade which either needs to be unblocked (by killing floating brains) or are simply no go areas and to be ignored. There are no waypoints for most of the exploration which means players will have to search everywhere to find the next piece of the puzzle so to speak. It’s a little cheap as far as I’m concerned as objectives did feel somewhat vague and having unnecessary searching didn’t add anything to game other than a small dose of tedium.

The spells are a cool part of the game and often will come in handy for certain sections. There are basic spells which can improve performance of weapons and aid in combat to mighty elemental attacks that can destroy complete areas. As players progress through the story, more spells are granted and between each level, players can spend points on levelling Alicia up. Some spells felt a little redundant but I guess this is purely down to how the gamer tackles the game. I simply favoured bringing out the guns and shooting anything that got in my way rather than scrolling through the menu of spells to cast them. The spell menu is a little cumbersome especially during an intense fight which perhaps lends itself to me not using them as often as the game should have allowed; Alicia is a witch after all. The more devastating spells were much more useful but again their use limited especially when it’s perhaps easier to rely on gun skills.

The guns themselves come in four forms which are your bog standard machine gun, a shotgun, rifle and gatling gun. Again it is quite possible to simply stick with one gun (although you can switch between each gun type on the fly) for the duration of the game; especially if you have maxed out its power. There didn’t feel to be much difference between the weapons and only when enchanted with magic did the weapons feel like displaying different traits.

Graphically Bullet Witch has some decent design although at times a little underwhelming. You are often presented with some great areas which truly do impress but then have less appealing areas to wade through. The character models for Alicia and other leading cast members is of a very high standard (as viewed during the game’s cut scenes) yet other in game models aren’t as good looking. Alicia herself animates very well and looks convincing as she zooms in for better aim whilst continually looking very sexy indeed with the silky black number she wears throughout. The boss characters are also very impressive in their scale and design as these hulking figures tower over Alicia and everything else.

There are a lot of facets of the game that are very good, such as the physics and being able to cause a lot of collateral damage either with magic or by shooting stationary objects. However the use of magic and things such as physics seemed unused and could have been implemented a lot better especially as they are not necessary for success.

On a more annoying note, Bullet Witch does have a few graphical issues that have to be mentioned. For starters the level of detail draw distance is absolutely terrible as you see not so far away objects being rendered before your very eyes. This results in a lot of the wider viewpoints you get throughout the game being very empty until you are close to objects. Then there is the slow turn speed and the fact that the camera doesn’t allow you to see projectiles coming from behind; and when I say projectiles I mean big things like cars and other large objects. Being hit by a car causes an instant death which is fair enough considering Alicia’s tiny frame. However the fact that you could be in the thick of gun battle only to suddenly drop down dead with no apparent cause can get frustrating to say the least. The developers should have at least given players the chance to avoid these with skill.

The sound is rather unusual and like the graphics has moments that are good and others where it is not so good and perhaps in the case of the voice acting, bordering on terrible. The voice cast provide a performance that lacks any sort of passion and fails to bring the characters to life. What could have been cool dialogue is turned into scenes that wouldn’t be out of place in an amateur dramatics production. The only real quality in the voice acting comes from the clichéd guiding voice in Alicia’s head.

The music is suitable and somewhat dramatic yet at times suddenly stops when you move away from combat, the transition could have been smoother as you really do notice it suddenly drop out. Other sound effects are as you would expect and things like gunfire and explosions all sound suitably balanced.

Bullet Witch is by all means, not the longest of games to play as the story on default settings can be beaten quite quickly, however there are some more difficulties to play if you so choose and to unlock more achievements. To be honest there’s not a lot of additional content with the game itself and in times of yore you would expect an un-lockable item or outfit as a bonus for beating the game. Well that’s not the case here as all the un-lockable items will become available for free download via the marketplace. What is annoying is the fact that delays have meant this stuff is still not available to western players.

Aside from new costumes and some bonus missions there’s not a lot of incentive to play through the game again unless you want to improve your score in the online leader boards. That said, for the hardcore (achievement hunters especially) there’s a fair few hours of plays to keep you occupied especially as you have to beat the game on every difficulty at least once to unlock achievements.

On paper Bullet Witch seems like a really cool game and when you take a look at the imagery and character design you are left with a good feeling about the game. However once you scratch beneath the surface you are presented with a rather mediocre gaming experience which boils down to a simplistic shooter with magical overtones. Enjoyment wise there’s certainly some essence of it here; except the aforementioned cheap deaths from behind which dampen the whole experience. I’ve enjoyed playing the game and I’m now embarking on the finer elements of the hard mode (which doesn’t seem that much different from normal). For the most part I can recommend this game as a rental because when you add up all of the parts which make the game, it just simply feels like more polish should have been applied to its rough edges prior to release. If you like bullets and of course sassy witches then Bullet Witch might just be the game for you. If you are a third person action fan then yes there are better offerings out there, but if you’re tired of those then Bullet Witch will certainly fill the gap, for now.