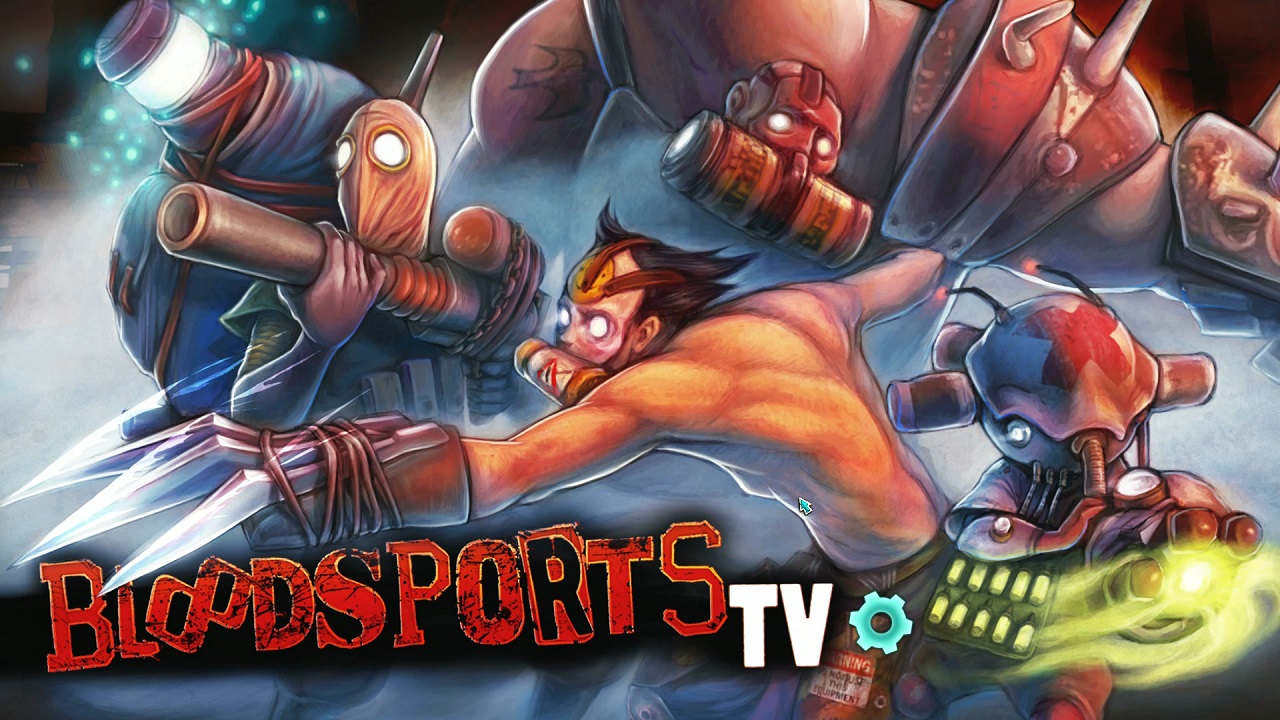 Bloodsports TV comes courtesy of Toadman Interactive and Fatshark and is available on Steam for under £6. The game offers some tower defence style strategic play and is viable for solo players and up to five players in online co-op. With so many tower defence games on the market is Bloodsports TV worthy of your time? Take a look at our Bloodsports TV review for the full low-down.

Today we’re taking a look at Toadman Interactive’s Bloodsports TV which is available now on PC via Steam for the low price of £6. The game offers a tower defence style game where players choose from a selection of class based characters and then enter the gladiatorial style arenas to fend off post apocalyptic cyberpunk style villagers. The premise is fairly simple. Villagers storm the arena in waves to take down automated defence turrets with the main objective of destroying a village crushing missile. Should they succeed then obviously it’s game over. Their job is not an easy task initially as barring their progress is the player character who obviously uses every means possible to take them down and protect the missile.

From the off, players can choose to go solo or team up with up to four other players. There’s a choice of classes which comprise of Slayers who are damage dealers, Bruisers who act as tanks, Regulators who are you basic crowd control support and finally Medikus the team healers. There are two characters to choose from initially from a selection of 4 with each character having his or her own special set of skills.

Once players choose a map from a selection of six, then their character it’s all go. There are some other parameters to play around with which dictate the difficulty of the enemy and number of waves but ultimately this determines whether matches last around 10 minutes or much longer. As you would expect, the more waves added or increased difficulty means tougher opponents which also include the odd boss character thrown in for good measure.

Once in game, players then point to the location their character will move to who will then automatically attack anyone within range. The tactics come with positioning correctly so as to maximize the efficiency of the auto defenses alongside deployment of your own special attacks which take time to recharge and can be levelled up during play. The enemies come in all shapes and sizes and as you would expect start off pretty basic offering little resistance to more formidable foes who will chip away at your health quite quickly with special attacks of their own. So whilst attacking is automatic, selecting targets and character movement is handled by the player in real time. Coupled with choosing the skills and where to send them and there’s quite a bit to keep on top off, especially when health is low and one needs to retreat. Luckily there are some hotkeys which make things a bit easier, but when enemies swarm the arena then things do get tense and hectic.

Between each wave there’s the option to return to a handy shop which stocks all sorts of equipment which add passive stat boosts and other useful items to be deployed. There are combinations of items which add more effects which cost more and means players need to manage the limited funds they gain from killing enemies. Should players die then after a short countdown they spawn back in to pick up the fight once more – hopefully the auto defences manage to stave off any enemy advancement whilst you wait although with some of the bigger boss characters there’s a real race to get back in before they cause too much damage.

Bloodsports TV is a neat looking game which is well presented and with a concise menu and uncluttered screen during play. It’s easy to jump into and view the action up close and personal thanks to a zoom function which shows off some impressive character designs. When the action heats up, the game maintains a steady frame rate which is good, although with the lack of overall movement means it’s suitable for the not so powerful setups.

Audio remains fitting to the cyberpunk theme with a rocking soundtrack that sits in the background amongst the explosions and other expected sound effects. The only annoyance is the arena announcer who unfortunately begins to grate after a while. Luckily he can be switched off if desired.

Upon completion of the round there are rewards granted to the character class used which acts as a stat boosting levelling up system which commands a lot of time investment to unlock the most from the expansive skill tree. There’s also a score which can be checked against other players in the leaderboards. In all for the price, there’s a lot to do here although as a solo game can get quite repetitive.

The game is obviously meant for co-op where players can use the skills of each class with maximum effect and with a bit of communication can prioritize targets and generally watch each others backs. This element is sadly missed in the solo game as it would have been great to have some sort of AI companions to fill the shoes. That said, as a solo game it still remains fun just a little harder especially with some of the classes which act as support rather than having to do all the work.

Bloodsports TV is a neat tower defence game that has some good presentation, some not so complex gameplay and a fun approach to taking on cyberpunk villagers. Whilst there’s always room for improvement, the game is worth checking out and for the low price point is good value for money. However the caveat is this is really best enjoyed with friends in co-op. Even if it’s just two of you dukeing it out against the masses.