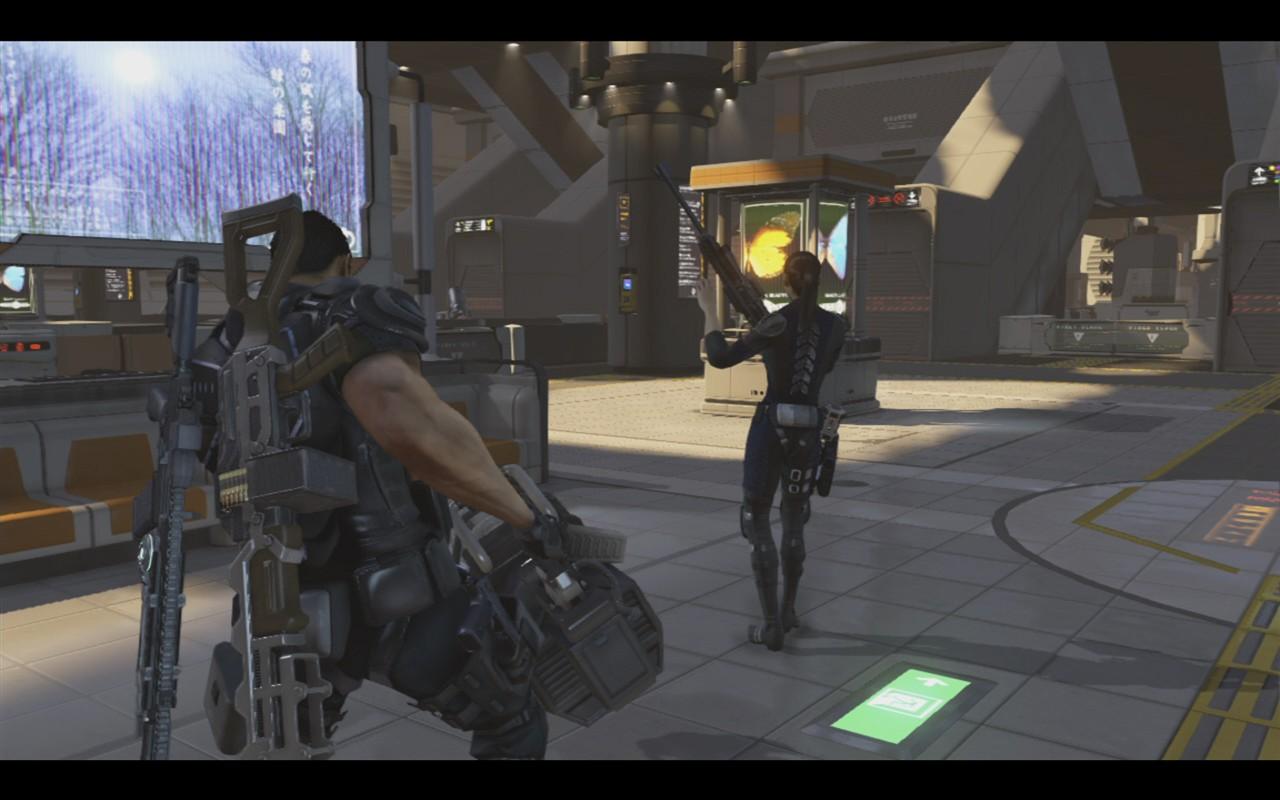 With a full English copy of SEGA’s Binary Domain now in our hands, it’s been an interesting ride through the game’s wild and fantastical science fiction themed story. Binary Domain is set in a Neo Tokyo of the future, filled with robots passing as humans, a squad of troops tasked with hunting down their creator, and a whole lot of cover shooting to keep you on your toes. It’s a third person action game through and through, but offers some interesting but not quite as well realized mechanics into what could easily be labelled as a standard run of the mill shooter.

What sets the game apart from its peers is an emphasis on squad based play. The game’s opening tutorial has you with one team mate, but as you move through the chapters you’ll be tasked with commanding two others. There are simple commands on offer for actual combat scenarios such as advance, retreat, hold and fire commands. On occasion, you might be required to agree with a team mate’s idea and simply utter a yes or no response. These are all easily accessed by pressing the Left bumper and selecting a response, or you can use a headset and speak the command directly (more about that in a moment). The squad based mechanics are a bit “awkward” because the story and secondary characters continually make it almost unfathomable as to who is actually the commander of the six man and woman outfit. On one hand, you have the British speaking Charlie obviously being the commanding officer, but then we’re controlling lead character Dan who acts as the actual commander. During missions you’ll also receive orders from your team mates again throwing more confusion into the plot.

Chain of command aside, ordering your team to carry out your rather limited orders is a little hit and miss and feels a bit too constrictive as there are no simple “move here” commands where the AI will stay on the spot and defend. The game features a consequence/trust system, where your squad members will be positive or negative towards your actions. If your trust rating is low with a squad mate, then they are likely to reject any orders given. On the flip side, if it’s high, then they’ll gladly do as they’re told, except, it rarely is given much scope to work, due to some confined and restricting areas of combat. It also seems that the AI are programmed to always stay close to Dan with no commands allowing you to set individual squad mates in position for more tactical firefights, which is a shame and takes away some potentially more dynamic gameplay. There’s also a simple customization system where tweaks can be made to each team member’s basic parameters with credits earned from kills as well as upgrades to each character’s primary weapon.

Squad tactics aside, Binary Domain’s combat is fast, thrilling and pretty well polished making for some satisfying gameplay moments. What makes the robot enemies on offer a bit more gratifying is the fact that removing limbs, and even heads still has them clambering towards you or sniping from the ground as they crawl. There’s also a bit of variety with the coloured foes pushing forwards to take you and your squad down. Each enemy acts with particular AI such as rushing forwards, sniping from afar, or standing ground from within cover. In little time, it’s easy to become familiar with their colour coding and simply destroy them with varying weapons and approaches which remains continually satisfying.

Binary Domain’s story offers up some interesting themes centered around the idea of robots looking and acting the same as humans, and their potential integration within a human society. There’s plenty of dramatical moments using in game engine via some lengthy cut scenes, but these do a fine job of conveying the plot as well as offering better insight into Dan’s past. They also present well the uneasy tensions of the evolving mission making for a story that is an entertaining ride and offering welcome breaks from all the killing of robots which sadly, does get a little repetitive in some sections. That’s not to say the game doesn’t try be a little more creative, because it very much does as it throws the squad into various scenarios including a jet ski driving section and some larger than life boss characters which further test the squad and commander.

Binary Domain has some distinct and bold visuals which work well within the subject matter and the fantasy idea of a future Tokyo. There’s a neat contrast between the darker and rejected lower slum area and the more colourful affluent upper structure of the city, however the last moments of the game opt for some dull and uninspiring corridor sections which drag out a bit too much. That said, the characters are convincing, and animate well enough, although the whole AI and command system is a bit flawed.

The audio is equally as polished as the excellent looks, and within the story there’s humour, tension, excitement and drama making for a likeable set of characters. The sound effects, the chatter during combat and the driving sound track make for a well rounded aural effect that’s easy on the ears and complimenting of the gameplay the way it should be.

Binary Domain’s voice commands are also a big feature if you’re getting into character and feel comfortable barking orders at the TV. For the most part they work well, but there are probably too many to remember, and the problems occur when the times you’re scripted to use them take away any natural element there could have been. It’s a bit of a novelty, and with a little more vision could have been a greater aspect of the gameplay. However, as it stands, the voice commands almost detract from the core experience simply because the impact the commands have is minimal and it’s easier to press a button. There seems to be too many words for the same action.

Binary Domain offers a reasonably lengthy campaign that will eat away 5-8 hours depending on how much looking off the beaten track you do. To top it off, there’s a comprehensive versus mode for Online play alongside an Invasion mode versus waves of AI which can be attempted solo or with a team of friends. The replay value of the campaign is fairly high but only for those wanting some slightly different conversation, and action sequences dependant on who you choose on your unit during the many times you’re asked to choose.

Overall, SEGA have a great game on their hands, which offers some quality shooting moments, interesting and engaging story, likeable characters and heaps of gripping gameplay from start to finish. If you’re a fan of action shooters, then you can largely ignore the squad commands and play Dan Rambo,however, the option is there for some flawed experimentation if you must dabble in its faux complexity. Binary Domain is a solid shooter well deserving of praise and is worth checking out if you like a action, shooters.