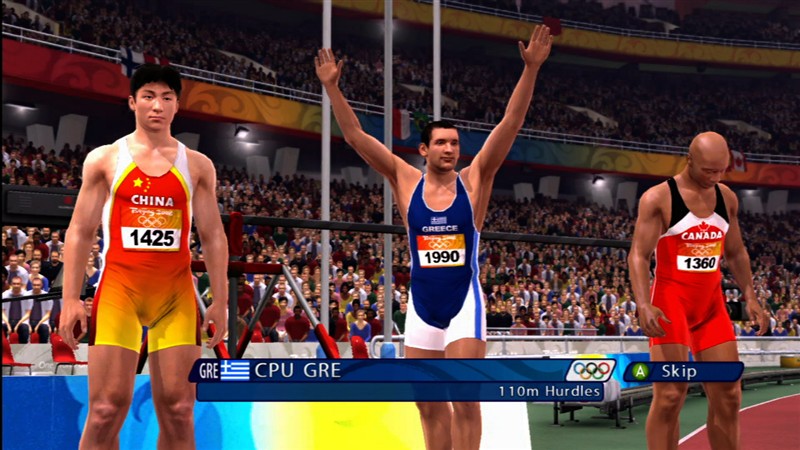 The Olympic Games are about to begin in Beijing and to catch you whilst in the athletics mood, Sega has released the official game of the games. This mean that gamers wishing to reach the peaks of athleticism can do so from the comfort of their own homes, minus any injuries and of course random drug testing!

Beijing 2008 features a fair number of events to take part in across the entire range of sports featured at the games. They are divided into the sub groups Track, Field, Aquatics, Gymnastics, Shooting and other. There are 36 events in total where your skills will be tested to the max. To be brutally honest, all 36 events are basic mini games where you are treated to some rather authentic animations as you either hammer or tap the A and B buttons or move the left and right thumbsticks in various ways, depending on the event. The entire range of events uses a combination of these, with minor differences between them, bar the said animations. It’s the kind of game that’s easy to pick up and play due to its simplicity, but also the kind of game that may cause burst blood vessels.

The controls are perhaps the game’s biggest drawback, because on one hand they are very simple and require little to no actual playing skill. On the other, they are the most awkward to actually use in some events, especially as you are to press the right or left trigger to jump or throw in some events, which is awkward if you’re hammering away at the face buttons whilst not holding the pad in the usual manner. I felt the controls could have had options to be changed to suit the player, but alas there is no option, so you have to basically get used to the default mapping. I wonder why the Y button wasn’t used very often as this seems a more natural button to press for things like jumping and throwing, especially if fingers are already bashing the hell out of the A and B buttons?

Those of you familiar with the old Track & Field or Hyper Sports games from Konami will be instantly familiar with how it all works together. From the main menu you are presented with various game modes for you to test your finger pushing or pad waggling skills. Training allows you to select any of the 36 events and get used to the requirements for success. Competition pits you against other CPU players in one or more events of your choosing. What is good here, is the option to choose to be either a male or female athlete. To mix things up further, you are able to customize the athletes in your squad, but this is merely a simple case of changing the faces, with no further tweaking available – so that means, no recreating yourself to appear.

Olympic Games is the main mode of play where you’ll have to lead your squad (based on the country you selected for your profile) through all of the events through a series of stages. There are specific qualifying criteria to be met during each stage and so if you fail, you’re kicked out of the competition, regardless of how well you’ve performed in prior events. Depending on how well you do during each event, you’ll gain points which can be distributed to improve your athletes abilities. This mode really is for those who have mastered each event, because during the latter portion of the competition the qualifying requirements get pretty strict, meaning if you fail one event, that’s your team out of the competition.

Beijing 2008 features a comprehensive online leaderboard where you are able to auto upload your score after each event. This is handy as it shows how well or badly you are doing compared to your online peers. In some events however, the leader board displays after each attempt and can get in the way of progression as it loads each time. Things like the high jump where you have to skip heights to get those top scores, the leaderboard has to load even if you are skipping heights. This is quite annoying and very slow paced. In fact the entire game, other than when you are hammering buttons is very slow indeed. The animations, whilst impressive, take some time and although you’re prompted to skip these, there just feels like a long delay between attempts.

Graphically Beijing 2008 is well presented, with an easy to navigate interface and of course the actual animations of the athletes in action, whether that be them running, jumping, swinging or throwing. The game also treats you to celebration animations and the grand finale of the podium complete with national anthem. Everything looks slick as you would expect from the Olympic Games, although I will say there are some visual discrepancies with some of the distances you’ll throw or jump. It seems the same landing animation is used over and over and so even though it may look like you’ve jumped 8.53 meters in the long jump, you actually have only jumped 7.88. It’s a minor quibble but points to a bit of randomness with the measuring tape. It’s hard to nit pick here when everything looks as well presented as it does, but I guess it’s expected when the gameplay is as simple as it is.

The game provides enough crowd atmosphere to get you into the competitive spirit and to drive you along when your fingers get tired. There’s some funky but typical up beat dance tracks that play in the menus and in some events the music carries through which is a little weird. During the replays you’ll also get a spot of commentary, although typically this can be a little off at times. Things like commenting about how disappointing you were, even though you are ahead of the pack in qualifying.

Depending on how sturdy your fingers are and how prone you are to headaches, will determine how long you’ll sit there in one sitting playing this game. Although there are a number of events, a lot of them are the same in terms of player input, which does make the game lacking in terms of long term play. The leaderboard aspect is good if you’re competitive, and of course playing with friends over Xbox Live is quite fun and increases the length of the game. For me the best way to really enjoy this title is to gather friends and family around and compete with each other face to face. As mentioned already, it’s a very easy game to pick up and play, and so all family members should be able to participate. Beyond this, I see the game as something to dip in and out of from time to time rather than go for marathon sessions.

In closing, Beijing 2008 does bring home the spirit of the games, and with its large roster of events, there’s something for every sports fan. I enjoyed the table tennis, archery and even some of the female gymnastic events (ahem), yet some events like the Judo and Skeet Shooting, I couldn’t get my head around for some reason. The game does offer a tutorial for each event, but this sometimes is a little vague and not really helpful for mastery of the events.

If you are looking for a game which is fun and easy to play in small doses, then Beijing 2008 is certainly worth a look in. However if you are after a more robust and complex title that goes beyond tapping buttons and moving sticks, then you might be a little disappointed that the developers couldn’t think of a more original input method. Rent first and see how you go with this one, especially if you are a lone gamer.