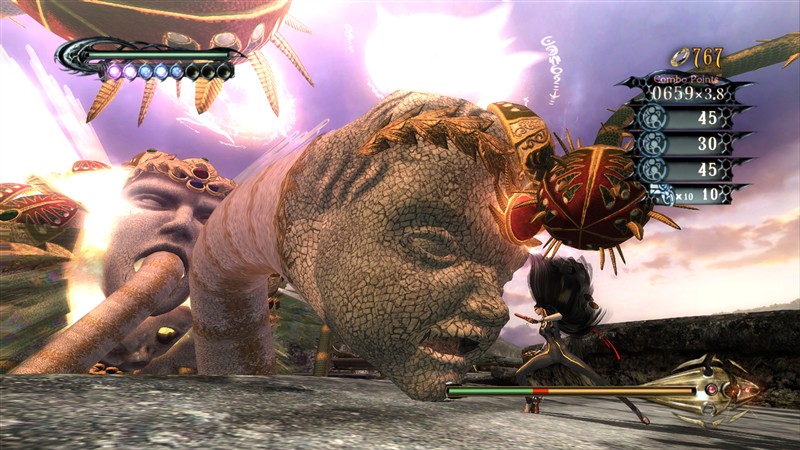 Action games have come thick and fast this year on Xbox 360, and with more coming in the next few months, gamers have some choices to make especially if you’re the sort to not rush out and buy the games as soon as they are released. Cue Sega’s Bayonetta a game filled to the brim of excitement and eye catching visuals. Developed by Platinum Games and following in the fast paced footsteps of Devil May Cry 4 the game offers a roller coaster ride of shooting guns and slashing away with melee weapons against large and the not so large demons.

Bayonetta is easy to get into and once you’ve passed the rather illustrious opening scene you’ll be presented with cut scenes galore and some fast paced action featuring the long legged, glassed wearing, witch on heat Bayonetta. The story can easily be ignored and the movie scenes appreciated for what they offer on the surface without having to get too deep into the who, why, where and what. For those gamers looking to go that bit deeper then they can do by reading the game’s literature as they traverse the levels and hunt down books.

The general gameplay consists of travelling through rather linear areas entering into battles with minor adversaries and then tackling sub-boss and boss characters, before being struck with another action packed movie scene. The game takes on an almost RPG flavour where you’re locked in an area until you’ve vanquished all foes. The game then slows down momentarily and shows off your score or basically how well you performed – ranking your skills based on time, combos and how much damage you received. The controls consist of two main attack buttons with combos galore to cater to button mashers and a little bit more depth for those looking to be flamboyant. A neat feature is the witch time which enables the player to evade attacks and then counter as time is slowed down. This is a core component to the combat and once mastered becomes key to success. Bayonetta kicks ass, and as she adds new weapons to her arsenal, more moves become available and if these aren’t enough then more can be purchased from the hellish store.

The game is quite simplistic in its design where you can be successful using the simple moves on offer and means that beginners won’t be bogged down with too much learning. You can effectively jump right in and start kicking demon butt from the off which is a good thing, making the game highly accessible. The gameplay remains the same throughout with some button mashing and QTE moments interspersed within the core combat, although between levels you’ll be offered a simple shooting mini-game and later on in the story you’ll engage in some recreations of SEGA classic games like an excellent version of ‘Space Harrier’. These moments do break up the repetitive nature of the basic gameplay and to some might detract from the experience if all you’re about is tapping away at buttons. However, those who are more open minded will find these classic moments to be enjoyable, clever and most impressive (especially if you remember the games they are based on).

Bayonetta offers some reasonable locales although some are a little on the predictable side rather than awe inspiring, such as the obligatory city area and lava filled rocky locales. The art direction is somewhat unusual but the main star of the show aside from Bayonetta herself are the adversaries. The design is spectacular with inspirations coming from all sides ranging from neo-classical to renaissance and beyond. The designers have done a good job creating the abominations that you’ll tackle and when Bayonetta unleashes her hair filled ‘Climax’ attack moves to finish them off you’ll be left smiling at the power she possesses. The enemies are never too challenging to the point of becoming frustrating (at least on default normal difficulty) and if you stock up on healing items and such like prior to starting a level, you’ll stand a much better chance of success – especially against the numerous larger than life boss and sub-boss enemies which are a sight to behold.

The game runs pretty silky smooth as Bayonetta jumps, kicks and shoots her way across the levels with no hiccups or issues bar some slightly off camera angles at times. There are some moments which seem odd like jumping from platform to platform during a boss encounter where the button prompts require pin point positioning to trigger them, perhaps one of the few moments of frustration in the game’s design.

The game’s soundtrack is as cheesy as it is tongue in cheek like the rest of the game. You’ll either love or loath the catchy tunes on offer and if you’re really not ‘diggin’ the music which at a glance might appear out of place considering the bloodthirsty action; you can head to the options menu and switch it all off. The voice acting is equally as cheesy and to compliment the witty dialogue, think pantomime like complexity and you have the gist of the performances in a nutshell. The sound is as full on as the visuals and you’ll come away awash with excitement as you cull your hundredth enemy in a hail of stabbing feet and gushing blood – complete with accompanying sound effects.

Bayonetta offers enough action without getting overly repetitive and sits at just the right length to keep your interest. Although the ending in typical dramatic fashion is rather drawn out, which just sits at the right side of humorous rather than annoying. There are enough collectibles and hidden stuff to hunt down, and with the option to replay levels means you’ll be able to revisit your favourites or try and best your personal score; or if you’re brave compare yourself to the rest of the online community via the leaderboards. Once the game has been beaten for the first time you’ll unlock additional difficulties to try your hand at which for more serious gamers offers more challenges. As it stands, even on Normal settings the game is pretty tame and offers a more relaxed experience.

Bayonetta is a solid action game that is filled with dark humour, sex appeal, silliness, plenty of action and enough cinematic quality to keep you well entertained even when you’re not slicing up demon butt. The game certainly stands out from the crowd due to the unique design of the leading lady and her subordinates. It rarely offers anything new to the action genre it neatly sits in, but the overall amalgamation of its parts presents a game that is highly enjoyable, easy to play and is as weird as it is wonderful. If you’re looking for a game that doesn’t take itself too seriously but is drenched in bewitching flair, then this is certainly a game to slap into your games console of choice. You certainly won’t forget about Bayonetta for a while even if her plight remains a mystery to you.