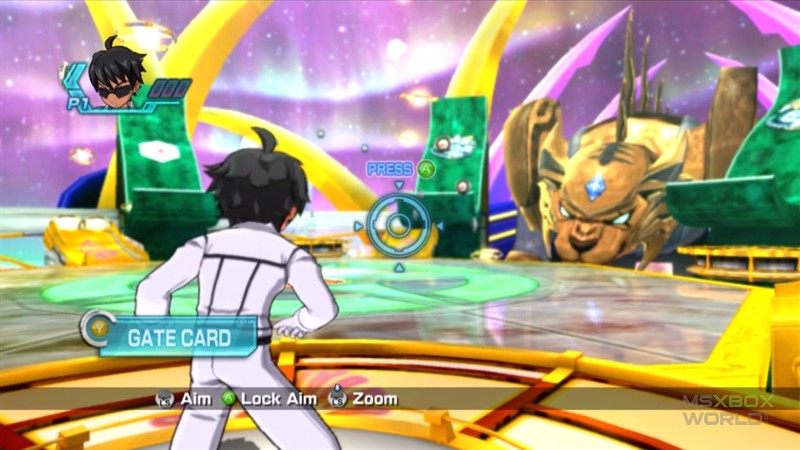 Kids go through all sorts of crazes whether that be jumping on skateboards, collecting Panini football stickers or playing the latest video game. That also includes buying the cuddly toy, T-Shirt and whatever else the marketing guys can throw out there to entice moms and dads to buy them for their shirt tugging youngsters. There simply are too many to mention and although some stand the test of time, others fall into obscurity, overshadowed by the latest thing to hit the shops/tv screens and magazines. Well we’re at that juncture again, as the latest craze is Bakugan Battle Brawlers straight out of Japan and onto the playgrounds. Pokemon has lot to answer for, and although Bakugan has its own theme offers similar antics which revolve around collection and fighting. If you’d rather avoid plastic toy models and build a virtual collection from the safety and more imaginative Xbox 360 console, then Activision has taken up the challenge and published the video game version to keep the fans well and truly occupied and also offering an excuse for those who should know better the chance to get familiar with the world of Bakugan and get fighting!

Bakugan offers gamers and fans alike, the chance to partake in a story mode and battle mode where you’ll be able to learn everything there is to know about Bakugans and what to do with them. The story is probably the best place to start because it’s here where you are introduced to the game’s characters, the Bakugans themselves and of course how to play the game. If you’re not overly familiar, then a handy tutorial is available, but this only preps you for the long road ahead, offering the basics of how to play.

To begin you’ll choose a preferred affiliation from six main areas which seem to follow the usual elemental patterns we’ve seen before in countless games, you know, water, air, fire, dark, earth etc. You’re then given your first Bakugans where you’ll then be able to head into battles as you follow the easy to understand storyline.

The Bakugans are spheres that fit into the palm of your hand but once unleashed into battle turn into various monsters. They talk, and seem to enjoy being controlled by their human masters – although the story purports something a little more sinister. The actual game itself is fairly straight forward, you have three Bakugan and several cards which are divided into gate and ability cards. Each player lays down a gate card and then throws one of the three Bakugans onto the card (missing is not advisable as you effectively miss a turn). Some areas allow you to roll your Bakugan around to pick up collectibles which increase the power of Bakugan or offer specific power ups, but the effectiveness of wandering off course is determined by the stats of your Bakugan (which you can upgrade in the shop).

The onus of Bakugan battles is to be the first to win 3 gate cards, and there are several ways to accomplish this. You can either enter a Bakugan battle by landing on a gate card occupied by an opponent, or you can land two of your own Bakugans on a gate card – however if an opponent’s Bakugan lands on a card occupied by one of your own then you have to engage in battle and vice versa. There’s another way to win (by staying on a card when all three Bakugans are in play) but this is quite rare.

When two Bakugans face off you’ll enter one of three mini games which determine the winner based on who has the highest power. It’s here where the ability cards come into play as these can be used to boost your Bakugan’s power. The minigames require moving the thumbsticks, pressing buttons at the correct moments and shooting elemental icons that match your Bakugan’s affiliation. These are versus the cpu and make for some intense moments especially as the AI is obviously better than you are and can, and will cheat.

Prior to any battles, you’re able to customize your deck of cards and Bakugan to suit, and there’s good reason to as well because you’re limited to a set number of cards and each card has a positive effect on any Bakugan who lands on it depending on their type and elemental affiliation.

From the beginning of the game’s story things are pretty straight forward, but once you make progress you’ll find that heading to the Bakugan shop to buy more cards and Bakugan complicates matters as you carefully spend your winnings on more powerful stuff. There’s certainly a tactical edge here and for younger players a real understanding of the cards is a necessity for success especially later on in the story against more beefed up opponents.

Once you’ve gotten more accustomed to how battles play you can then focus on upgrading Bakugans and choosing which cards to go with particular decks. Sadly you only get to customised two decks at a time which is a shame considering how many variables there are.

As part of the story you’ll be able to check out your avatar’s stats, change appearance and view your collections. You’ll also be able to enter the park and engage in 1 on 1 battles with various characters or enter tag and battle royale events. These are separate from the main tournaments and can help earn money to spend on more goodies. Your opponents start out pretty weak but once beaten and you’ve progressed the story a little, will come back more determined and tougher to beat.

Graphically Bakugan keeps in tune with its anime roots and offers a colourful visual style. Although as a card game you’re not going to see too much free control animation other than in the battles where you’re tossing your Bakugan around the arenas. Aside from this you’ll see battle animations of the well designed Bakugans which although are the same each time, are welcome and showcase their supremacy. The arenas themselves could be a little more detailed but do the job as with the various themes they showcase such as lava, wind and water.

The characters are typical anime by design and are a weird and wonderful mixture of cute girls and obnoxious teens. If you like anime or are a fan of Bakugan then you’ll no doubt be familiar with the characters. If not, then they’ll just be opponents who you’ll find entertaining during the story mode cut scenes.

The game features a typical rock like soundtrack that’s synonymous with anime, and will either grate or get you all fired up ready to battle. Luckily you’re able to turn off the music if it’s the former. The voice acting feels lifted direct from an animated series and for younger players is fitting and in keeping with what’s expected. It’s hard to offer much criticism here simply due to the nature of the game and the targeted audience. Spot sound effects do their job although for anyone not partaking in Bakugan battles and you’ve got the TV volume up loudly (like mums in the background) might ask you to turn it down.

Now this is quite surprising as Bakugan is a fairly hefty game in terms of the collection aspects. Sure you might breeze through the story portion quickly, amassing a fair gamerscore as a result, but to open up everything is going to take a lot longer. So for younger gamers there’s certainly lots of value for money here which is highly commendable. Toss in some local multiplayer and you’ve got a great little game to keep the youngsters (and some adults) well entertained.

Bakugan is surprisingly fun and addictive and that’s coming from an older gamers perspective. Whilst the anime inspired story might come across weak and typical, the game is fresh and rewarding to play due to its tactical slant and despite the fact the AI likes to cheat, but also makes its fair share of mistakes. Also the last boss is quite the pain to beat and will require nerves of steel and a complete understanding of the gate/ability cards. It’s this depth that makes the game rewarding.

Even if you’ve not been bitten by the Bakugan bug, there’s plenty of entertainment here as you battle the lovely characters on offer and collect cards and those glorious Bakugans to your heart’s content. It’s really quite hard to fault such a simple game because for all intents and purposes it succeeds at what it sets out to do. Sure you could have had a sprawling adventure game with controllable characters and vast worlds, but this would have lost some of the simplistic charm the game has.

In closing, Bakugan is a welcome game and one that is entertaining to play especially if you’re a fan. There’s lots to collect, plenty of battles to engage in, and with lots of pad waggling, button pressing and an endless stream of battles means you’ll be captivated until you’ve got them all. This game certainly gets a thumbs up and should be on any kids wish list for the holiday season. It’s bright, exuberant in content, inoffensive and entertaining, what more could the kids want?