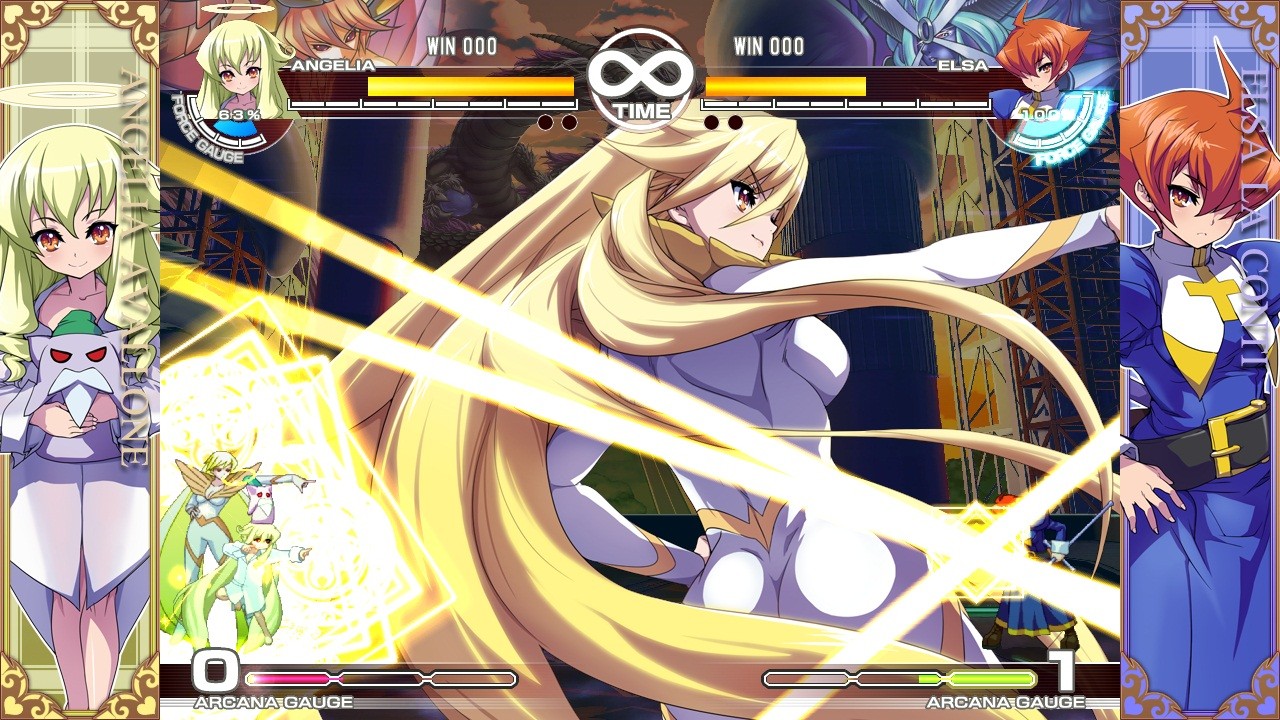 Zen United are a company which localises what we like to call “Niche” fighting games to our side of the world; games such as Blazblue Continuum Shift and Guilty Gear Accent Core. Arcana Heart 3 is the newest game localised by Zen United, originally made by Examu for the arcade and then ported by ArcSystemWorks.

Arcana Heart 3 is a very complicated game, at least in terms of its system mechanics which can be very intimidating for the casual player, although you probably can get by a little against the CPU by learning a few basic moves which require similar actions to Street Fighter games. There isn’t a trial or tutorial mode in-game to guide you through the mechanics or teach you combos, and so you’re left having to work things out yourself. The manual that comes with the game is also lacking in a lot of information, coming in with only 4 pages which is a shame! Learning to play this game is therefore a difficult task for anybody who isn’t already used to the mechanics of niche games like Blazblue, although admittedly this game is squarely aimed at that audience and makes no beef about it. Gamers who are looking to take what’s on offer “seriously” however will enjoy an incredibly aggressive fighting game that is excellently fast paced and has tons of customisation and variance (There are some 529 possible combinations). You choose a character, then choose an associated arcana power, of which you’re able to then mix and match based on defence and offensive stats.

There are 5 main buttons which consist of 3 primary attacks, 1 for a homing dash and 1 for arcana attacks. The homing dash button sends your character towards your opponent at high speed, further reinforcing the fact that this game is ultra aggressive. Playing through the story mode and you’ll find events aren’t very interesting, but if you wanted a good story mode with your fighting games, then you’re out of luck and should be used to it by now (Mortal Kombat 9 being an exception). The training mode is also lacking a very important 2 player training option for the competitive players, which is a shame because this is where real competitive edges can be discovered and practised. There is an online mode available so you can play against people all over the world – although we would recommend you only play against people in your region, or you may have issues with the dreaded input lag. There’s a Spectator mode when your in a lobby with people playing, a ranking system for the competitive and replay saving so you can enjoy or wince at your endeavours.

In-game graphics are all based on 2D sprites. The character sprites themselves are quite detailed and distinctive looking based on female fighters that sport classic anime looks, but the backgrounds are very static and don’t seem to have any life in them whatsoever – even when there’s things that should animate, like a waterfall for example . There’s plenty of colour available and the screen does become awash with animations when special moves are performed. The game in the arcades is played in 4:3, so if you want to keep the game “arcade perfect” you then need to play with either static or animated borders, both are distracting because they are either animated or colorful. You can play in wide screen mode if you choose, which removes borders completely, but it then affects many things in game such as bouncing bullets. Tournament standard and ranked online matches are set in 4:3 mode so the borders are something you have to live with.

The soundtrack for the game is simply ok and not very inspiring, it doesn’t really feel like it suits Arcana Heart though. The music presents itself in an upbeat manner which is good for fast aggressive games like this one. Some tracks are good though whereas others are just really bland. The voices are also varied and ranged from squeakily high pitched to more sullen and pensive tones – remembering that they are all girls.

Like most fighting games, the single player mode doesn’t have much longevity to it as there’s a distinct lack of modes once you’ve cleared the story with all the characters. Therefore all the longevity comes from the multiplayer. With the possible 529 combinations of character and Arcana, there is plenty of choice in terms of gameplay to keep the game fresh. One and a half years from the game’s initial release in the arcade, new tactics and techniques are still being found, so that’s a positive for the more serious fighting gamer. For the competitive, this game is likely going to last you until the next Arcana Heart comes out (Which is going to be a while considering Examu has just released Aquapazza).

If you’re looking for a technical, fast paced fighting game with loads of different combinations then this is well worth checking out. It’s a game with no comeback mechanic and an interesting system. If you like fighting games then it’s worth picking up, especially at the generous price some places are offering it (Zavvi 18 pounds). However, with no in-game tutorial or combo trials and a manual that’s only 4 pages thick, the game is incredibly difficult to get into. You have to learn everything from the Internet and that may put off any newcomers who try to get into the game.