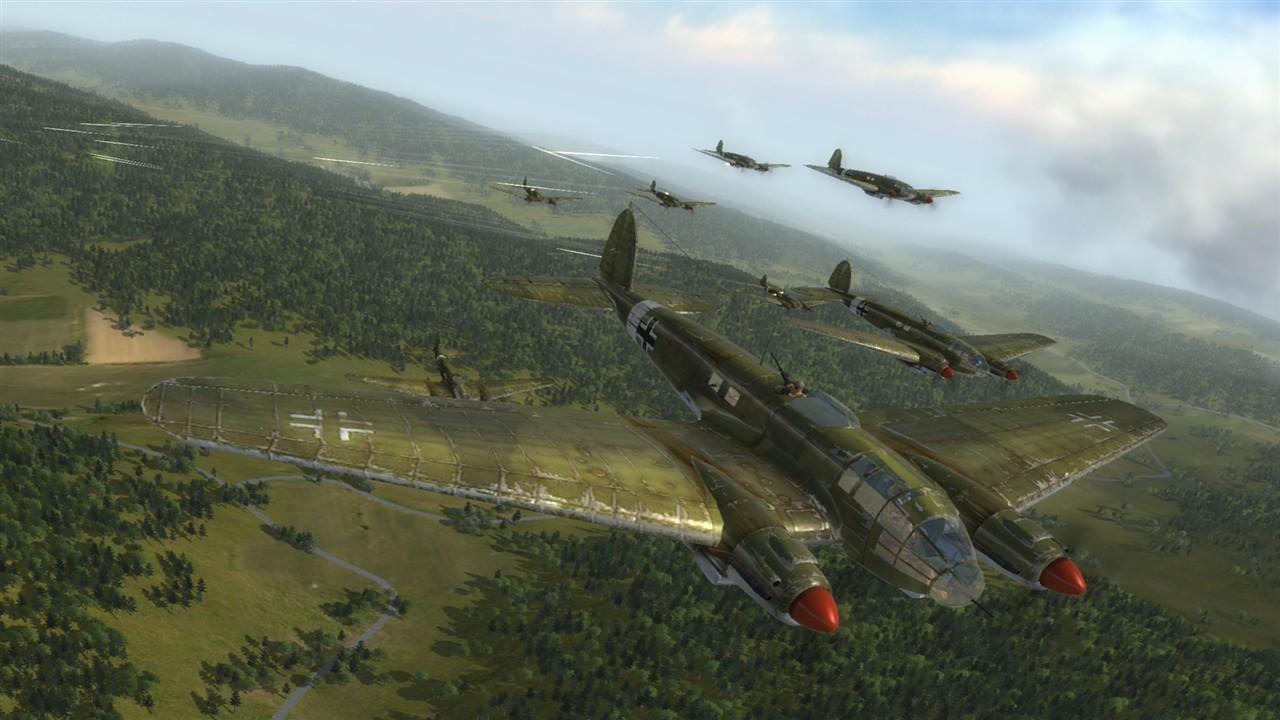 Air Conflicts: Secret Wars tells the tale of fictitious smuggler and opportunist Dorothy Derbec (DeeDee) as she flies her way through various depictions of real missions of World War II in Europe. Her goal is to find answers about her father Guillaume Derbec who was a flying ace during the Great War. On occasion you’ll enter flashback missions set during the Great War which allow you to uncover further information about Guillaume and his heroic and some questionable deeds.

There’s been a few World War II inspired flying games on Xbox 360 most notably the Blazing Angels games and the more recent IL-2 Sturmovik, so another one is either going to be welcomed or met with numerous comparisons to the other games. In general, flying games are not as popular as first person shooters, and with many games covering WWII it’s an interesting choice to return back to the period in this manner when more gamers are seeking modern day thrills nowadays. The story is presented from DeeDee’s point of view and is told via in game chatter as well as hand drawn style scenes between missions. There are some interesting themes told throughout the campaign which compliment the combat and add a bit of cohesion across objectives. You’ll encounter several larger than life characters (who love the odd drink here and there) and what’s more gain an understanding of the rigours of being a pilot in WWII. What Secret Wars provides as it jumps into the foray of the arcade shooter fused with a little bit of sim for good measure, is an action packed ride through some 50 varied missions. You (as DeeDee) take on the German regime fighting for and alongside various opposing factions such as the British and the Russians performing all sorts of mission types including aerial combat, stealth recon, bombing runs and even defensive protection. There’s a fair bit of variety, and what’s neat is being able to select which aircraft to use for each mission. There’s around 16 on offer, although you’ll have to earn mission stars to unlock many of them. The basics such as Spitfire, IL-2 Sturmovik, and more that are unlocked earlier such as the Stuka, BF109 etc are readily available depending on the mission type. What’s neat is being able to pilot German or allied planes rather than being restricted; although on occasions there are some restrictions posed – a fighter isn’t going to be much use on a bombing mission for example. Stars can be gained via completion of mission objectives, shooting planes and finishing missions.

The air combat itself is pretty fluid, and with the choice of arcade or sim controls, various views such as the rather cool but restrictive cockpit view, you’ll have great fun shooting and bombing your way through the missions. Most planes come with a load-out of bombs and rockets, and of course each come equipped with a cannon. All planes have infinite weapons, although for the bombs and rockets you’ll have to wait for them to recharge before being able to unleash them again. Your machine guns also overheat if you continuously fire. Secret Wars also provides an adrenaline mode which once triggered, slows down time allowing you the option to pick your shots more carefully. The biggest tactical element of the combat in both aerial assaults and ground bombings is being able to position yourself correctly and maintain an appropriate speed without stalling the engine. It’s an easy balance to master, although when faced with faster moving targets does require some skill. A handy lock-on on the lower difficulties is noticeable and if you want uninterrupted play, then jumping in to the Ace difficulty is a must.

Sadly the game’s graphics let the experience down overall, as the presentation is not as polished as it could be especially compared with the photo realistic offerings we’ve seen in other flying games.There’s a real muggy look to the graphics which is exasperated by a lack of brightness and even no option to adjust this in game. The texture quality is low, the actual aircraft models aren’t as detailed as expected, and the overall levels of polish seems low. That said, there’s a pretty decent variety of locations with some looking more spectacular than others – the misty fog in the French valleys for example look pretty neat. If you’re 3D hooked up, then the option to give the game a bit more depth is available.

The audio has to be taken with a grain of salt because although there’s a dramatic and non eventful orchestral score driving the audio to compliment the action, the voice acting is well performed but highly cliché. You’ll hear a mixture of French accents, stiff upper lipped British and Russian that could well have been better served speaking in their native tongues. The game has a subtitle bar across the base of the screen (when someone talks) which cannot be removed, so would have been beneficial considering the chatter is kept to a minimum once you’re actually in missions.The engine sound effects are spot on though, and what is an extra nice touch is hearing the roar of the engines when performing a steep dive – it just adds perfectly to the dramatic effect of almost nose diving into the solid ground. The aircraft sounds are definitely one of the game’s more redeeming features.

There are some 50 missions and a few difficulties to choose from; even an option to replay completed missions at your leisure should you have a favourite. If you’re after more straight up combat, then a dogfight mode is on offer where you can tackle waves of opposing planes in time attack and survival modes. The story missions are not overly drawn out and offer reasonable checkpoints making for a non intrusive experience that will last between 6-8 hours. For the competitive, there’s a multiplayer mode where you can take on the online communities in deathmatch, TDM, CTF and protect and destroy modes. Sadly finding games is an issue, but hopefully once the game releases in North America there will be more players.

Air Conflicts: Secret Wars is an average attempt at a World War II aerial combat game with a seeming lack of overall polish to give it an extra boost it really needs. It’s an entertaining ride throughout, if you can stomach the rather lacking voice acting and sub par looks. Offering decent combat, a good variety of missions and an reasonable selection of aircraft, this is a game to pick up if you’re suffering withdrawals and are in need of another flying game. If you’re new to the genre and looking for a comprehensive experience that is indicative of the hardware , then perhaps you would be better off sticking with what’s already available.