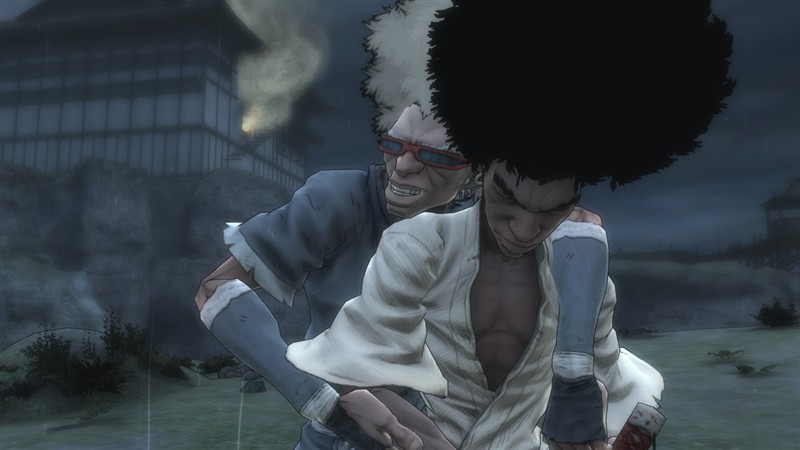 Afro Samurai started out as a manga (Japanese comic) created by Takashi Okazaki. It was later then made into a short animated series and then onto a full blown animated TV show. Japanese storytellers and artists come up with many crazy ideas, but the unique features of Afro Samurai is its use of western culture fused with the fine touches of Japanese culture. This eclectic mix has undoubtedly cast the character Afro and imaginary side kick Ninja Ninja into the hearts and minds of many. Those who like anime, those who like hip-hop and those who dig the ridiculous and sublime.

Afro Samurai the game, the anime, the manga is no slouch and although featuring some humor is not really the basis of the story. The animated series is of a serious nature and although you can probably laugh a little at the whole premise of a black afro sporting samurai warrior, there are some serious issues played out in the story – revenge, solitude, aggression, betrayal, learning, it’s all here and I guess helps to make Afro and the characters he interacts with all the more compelling viewing. Let’s not forget that an all star cast of actors are used to provide the voices with the most noticeable being Ron Pearlman (Hellboy), Samuel L. Jackson (Pulp Fiction, Shaft, Snakes on a Plane – and countless other movies) and the rather gorgeous Kelly Hu (Marshall Law, Scorpion King). Now when you throw in some rocking hip-hop beats featuring none other than RZA of the Wu-Tang Clan, and you’ll find a rather interesting pot pourri of styles and cultural flavours culminating into an experience unlike no other.

Afro Samurai tells the tale of a young boy and his father who happens to be in possession of a legendary number two headband which allows him the right to tackle the owner of the number one headband. Being number one, then affords the owner all sorts of godlike power to rule over mortal men. However, ownership of the number two headband is fraught with constant danger as men and women alike covet the power it grants. Not really seen in the video game, but in the anime, a young Afro witnesses his father’s murder and the loss of the number two headband. From that day onwards Afro is determined to seek revenge on his father’s killer – who goes on to become a godlike character and formidable opponent.

The game starts off in Afro’s early teenage years, where his childhood is not really explained in any detail, so from the offset, some knowledge of the anime is worthwhile although not a necessity. The basis of Afro Samurai is a third person hack and slash action game, although a more refined one than merely cutting and slicing your way through hordes of brainless opponents. I think a closer parallel would be with Ninja Gaiden rather than games such as Dynasty Warriors.

The game offers up some minor platforming to break up the constant battles that Afro gets in and out of. However there is really nothing too taxing, as the focus as you’d expect is on swordplay. Afro has a variety of attack moves/combos, and although somewhat simplistic at first, there are enough attacks to spice things up as you play and level up the character. You’ll have horizontal, vertical attacks, kick moves, counter attacks and the all important focus attacks. The focus attacks are the real star of the combat, because with a simple press and hold of the LT you’ll enter the focus mode and be able to literally slice opponents limb from limb. However it’s not an infinite ability and one that you need to careful pick and choose the right moments to unleash. Using the left thumbstick during a focus charge attack, you’ll be able to target head, body and legs for the chop. It’s easy to use and a little bit more challenging to master, but when you do get it right you can really tear through opponents with an elegant grace and panache.

There are some decent interactions on offer and you’ll face enemies that act semi-intelligently, although admittedly you’ll really only feel the pressure when playing on the game’s unlocked Number One HeadBand difficulty. Throughout play, you’ll earn experience which is then automatically placed into upgrading Afro’s abilities. You’ll get more moves, more combos and generally more accomplished at kicking ass. The HUD is pretty barren and so there are no numbers or indications of how well you are progressing. What is neat is that enemies and Afro himself will slowly get more bloodied as health reduces. It’s a cool visual indication of your health status, and those around you.

In tune with the anime, you’ll face a number of boss encounters which provide more one on one experiences. Here you’ll need to work out how to defeat each one by exploiting weakness in their attack patterns. Some are pretty tough, but not so tough that you’ll be pulling your hair out in huge clumps.

The story is what drives the gameplay and keeps it all together in one neat package. Afro isn’t the most charismatic of characters and says very little throughout the anime and the game. You can’t blame him, because being the number two has meant a life of pain and suffering, and with an inner desire for revenge, there’s not really much Afro can say. To make up for this almost mute character, the introduction of Ninja Ninja as Afro’s subconscious is a clever and entertaining move. Ninja Ninja has plenty to say about everything, and Samuel L. Jackson who voices the character really captures the essence of what he’s all about.

Afro Samurai retains the animated look from the series and brings it all to life for video gamers. The environments, characters, animations and swordplay all mimic the source material extremely well and although not as detailed as some other games, conveys the spirit perfectly. I think what works best here is the extreme graphical violence. In many games you’ll have characters with big swords or guns shooting, slicing and chopping up opponents with little visual effect – almost making you believe the weapons are made out of rubber. Thanks to Ninja Gaiden 2 upping the ante, it’s great to see this game not adopting a more conservative approach. So, when you slice that enemy you’re going to slice their body clean in two. Same goes for heads, limbs and is not restricted to males either. You’ll be able to exact rough justice on both sexes, and some of them are rather sexy to kill as well. The graphical effects really do propel the game into another realm and for some are perhaps worth the price of entry just for that.

My only real complaints here are some overly dark areas and glitches where characters get stuck in the scenery on occasion. Also some of the platforming is a little unforgiving, in that some unnecessary precision hampers what could have been some light distractions from fighting. That said, overall the game looks great and plays equally as good despite the glitches.

Simply amazing, although you might not feel this way if hip-hop beats and Samuel L. Jackson get on your nerves. The whole Japanese and Hip-Hop vibes captivate and feel perfectly suited to the game’s premise. Whoever thought of the idea is a genius. The music is excellent and jumps in at the opportune moments to drive the combat into the stratosphere. The voice acting is well produced, and probably lifted from the animated series. So you cannot complain if you’re a fan. Jackson’s performance as already stated adds so much to the experience, that it’s hard to think how the game would play without his smarmy comments and nagging voice. I cannot fault the sound in any way shape or form.

Afro Samurai is not the longest of games and with only 9 levels to battle your way through, it is over perhaps a little too quickly. The sad thing is, there are no additional modes of play or challenges once you’ve beaten the game, the only solace you’ll find is by tackling the game again on the tougher difficulty setting. The game is purely a single player only experience and with no online options at all feels a bit empty. Even some leaderboards would have been a neat inclusion. Expect around 5-6 hours playtime on your first play through, and the option to replay favourite levels to grab some collectibles.

Having watched the animated series, Afro Samurai the video game is a perfect companion for those who feel all sadistic and want to be in control of the big hairdo character. For gamers who have no clue about the series, then I think you’ll still find an enjoyable game on offer, although your enjoyment will be somewhat muted compared to the fans. The game is pretty simplistic, and easy to get into and perhaps not as challenging as some of its peers. That said, the unique graphical style, the gruesome violence, pumping soundtrack and wickedly placed humour amount to a game that ticks all the right boxes and is wholeheartedly recommended for action fans. I would suggest gamers watch the animated movie first, and it’s a shame Atari/Namco didn’t produce a bundle for those unfamiliar with the series.

Despite some glitches, simplistic level design, some repetition, its brevity and perhaps music that you’re not going to agree with, Afro Samurai is an enjoyable experience and well worth picking up. I would also suggest if you’re unsure to rent first, although fans should rush out and buy it because the game captures everything you know and love perfectly.