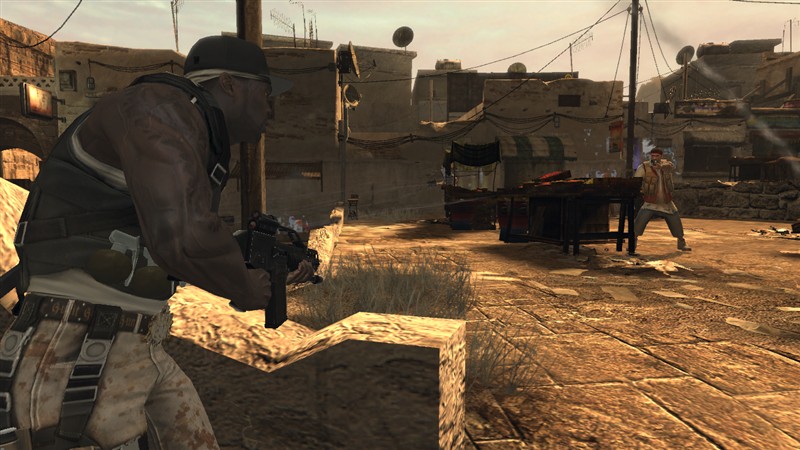 I was a little tentative when the task of reviewing 50 Cent Blood on the Sand reared its head, not because I’d heard stories of a very poor previous game, and not because I’m not a fan of the hip-hop star, but more to the fact that being a game so heavily laden in hip-hop, I wondered what appeal the game could possible offer to those gamers who either dislike the music style, and more overtly, dislike 50 and his G-Unit buddies. So after enthusiastically slapping the disc into my Xbox 360, my journey for finding out the answers I sought after began. After an hour or so playtime, I can say at this juncture, that I was pleasantly surprised.

50 Cent: Blood on the Sand or BOTS as it will now be referred to as, starts off with a rather convoluted and sporadic story introduction. 50 and the G-Unit have just finished a huge concert in some middle eastern country and on their way to get paid, they learn that their millions of dollars have been stolen or are missing, whatever. Now here comes the ridiculous part. Rather than settle things in a more normal manner, you know with some serious lawyers, 50 and the G-Unit decide to fulfill the typical rap star stereotype and take matters into their own hands. And that ladies and gentlemen, means shoving a gun in the face of the promoter and threatening to kill them if they don’t come up with the goods pronto. It’s laughable at best, and gets even worse because the promoter has hidden away in his safe, a diamond encrusted skull that is priceless and a worthy form of payment. From that moment onwards the story begins in earnest as the skull is stolen from 50 and the rest of the game hinges on its retrieval.

I’m sure 50 and G-Unit had great fun in the production of this game which makes them look more badass and gangster than what they actually are outside of their own rap videos. The whole game is a perfect excuse for 50 and pals to flex their overgrown muscles and itchy trigger fingers – when we all know that despite 50’s menacing appearance and somewhat shady background, in real life he’s actually quite a solid and nice guy – when he’s not trying to fight world class boxers and the like.

So, in a nutshell what BOTS offers is a third person action game that has more similarities with Epic’s Gears of War than I care to mention. In fact although it’s bad form to name drop other games in reviews, I’m going to make an exception this time, because If I was to describe BOTS, then it would go something like this…”50 Cent: Blood on the Sand, is in fact the warped love child of EA’s Army of Two and Epic’s Gear of War, end of story”.

So, you control the muscular and street talking 50 Cent, who is accompanied by one of his G-Unit buddies. You can choose from Lloyd Banks, Tony Yayo and DJ Woo Kid who will then offer backup as you battle the thugs throughout the game. There’s no real difference between them, other than the odd personal comments they make, and naturally their voice overs are different. The basic gameplay is point and shoot, however you are able to press the A button near cover and put your back to it and then pop out and shoot, or hop over if allowed, and if you’re feeling fancy then you can even quick swap between two points of cover. Sounds familiar right? At your disposal you have a reasonable variety of weapons which I’m not going to list as you’re probably well aware of the usual suspects. Plus when in close quarters, 50 can unleash his inner beast by dishing out some melee attack moves (QTE events pressing a single button).

The main focus of the combat is to accumulate kills as quickly as possible to earn points, these are then totaled at the end of each stage, where you are awarded either a gold, silver or bronze medallion. These serve little purpose other than showing you how badass your shooting skills are (and unlocking achievements). Throughout each level there are posters you can hunt and grab, and special targets to shoot – which in turn offer more points and unlock some of the game’s bonus content such as videos and stills. You’re also able to break open various crates which contain valuables. The money accumulates and can be used to call up your weapons supplier and purchase some new gear and moves.

The enemies behave reasonably, and will pop out and shoot as much as you do, but can be a little too predictable at times. I opted to start the game on the hardest difficulty and still managed to breeze through the game quite comfortably. Although when foes take up to 5 headshots before they drop, it can be quite tiresome – especially if you’re not so controlled with your firing. That said, the combat is quite solid and enjoyable for what its worth. My only gripe, and perhaps this was exasperated due to my choice in starting difficulty, were the moments when enemies would suddenly rush out from a location giving me little time to react, and subsequently resulting in 50 getting killed. Now this action might please some people, but come on this is 50’s game and his survival is the main focus, and not laughing out loud at his hilarious ragdoll death scenes.

BOTS also mixes things up a little by including a couple of moments where you’ll be driving a APC or riding shotgun in a chopper. They are welcome breaks from the on-foot sections and are pure arcade, with little skill required other than holding down the fire button when in the chopper (yes, the mounted guns don’t overheat as you’d expect), or the accelerate trigger when driving.

Graphically 50 himself has been rendered rather well and is instantly recognizable, although we don’t get to see his trademark grin – which is a shame because that’s part of his character we’re used to. His portrayal in game is very much of a serious 50, so not many moments for laughing and grinning unfortunately. I’m not convinced over the levels themselves, as they appear more functional than impressive. The game’s setting provides a very muddy looking backdrop, and so expect lots of browns and a distinct lack of lush colours. I guess this is to fit in with the middle east setting. The enemies are pretty much cookie cutter brothers and you’ll see few variations, so expect to kill the same dudes over and over throughout the game. This is a minor quibble, but worth mentioning all the same.

As far as the game running smoothly, I cannot find any fault here, as at all times the frame-rate remained steady and unobtrusive. The only issues I noticed were the textures taking some time to load on some occasions – that will be Unreal Engine technology for you.

Sound in this game is an interesting area, because I’m not sure whether 50 and pals actually provided the voices for their characters. I suspect that some stand in actors were used. They do a grand job of sounding typically stereotypical and you can expect the kind of language that would make your grandmother blush. The voice acting for the secondary characters is what I would describe as totally cliche and lacking in any sort of finesse. It’s cheap and sounds like the tea boy was snatched from his duties, the same could be said for whoever penned the script. Perhaps they got the pool boy to do that?

The game offers a decent selection of tracks from 50’s career, and I believe some exclusive tracks as well. So…if you’re a fan of 50 then this is going to be music to your ears, quite literally. There’s an option to even play an instrumental soundtrack should you tire of ‘In Da Club’ and other head nodding beats. The problem I have, is that none of the game’s music fits the actual gameplay. It’s kind of weird, and I would liken it to merely having your custom soundtracks playing over the game. As far as the game’s spot effects are concerned, these are all functional and do their job as you’d expect them to. I can’t really say much more than that.

BOTS can be beaten in I’d say a rental period, or if you’re full on and playing on easier settings, possibly in one day. The game does allow for replaying levels, and gaining higher scores, and I think it’s fair to say that it’s worth playing again if you’re a competionist. There’s also the option to play co-op online, and this offers a different take on the game, because essentially the other player controls the G-Unit character, and you can strategize your attack methods, which the open nature of some levels allow for. I’m surprised there’s no tacked on versus multiplayer, but I think in the long run that’s a good thing. The achievements are well spaced out and you’ll need to invest a lot more time if you’re after them all.

I’ve been pleasantly surprised at how solid the game is. It’s far from perfect, completely cheesy, copies other games, but ultimately offers a fun no-nonsense shooting experience. The fact that the game is based on 50 Cent really shouldn’t have much bearing, and I really thought about this as I was playing. The bottom line is, regardless of the characters, the music style and the language, 50 could just be any character who is going around maiming anyone who gets in the way. So, if you can easily overlook the game’s tilt towards 50 and his music, then you’re left with a game that you would probably enjoy. If you’re a fan of 50 Cent, then this game is going to be the best thing since sliced bread and well worth the purchase. If you’re not a fan and just after a solid third person action game, then you could do worse, than what’s on offer. I would suggest renting first. If you hate 50 Cent and the G-Unit, despise Hip-Hop and are after a game with more taxing requirements, then you might be a little disappointed, but I would say you’d get your monies worth if you rented. 50 Cent: Blood on the Sand is a welcome pick up and play game, that provides much entertainment, albeit totally unoriginal. You might get better experiences elsewhere, but if you’ve exhausted those already, then it might be a worth a look in.