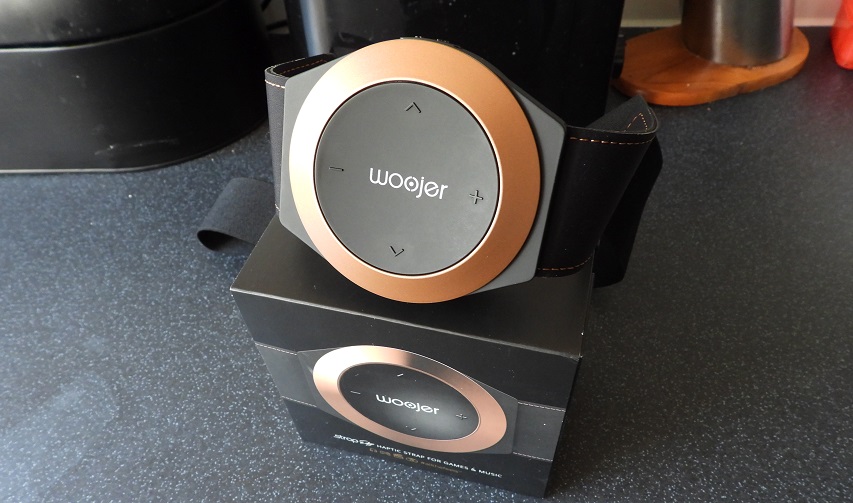 We finally got our hands on the Kickstarter backed Woojer Strap Edge (Backed in October 2019). After giving it plenty of play-time with various content such as music, games, VR Games and videos we offer our Woojer Strap Edge review.

First things first, Woojer Strap Edge isn’t going to appeal to everyone. Secondly, there are a few caveats to be mindful of before diving-in. The most obvious question to ask is what is your reason for being interested in this device which offers haptic feedback to enhance sounds from your movies, music, video-games, VR experiences or whatever sound source you feed it.

To begin, here’s a quick look at the unboxing. If you’ve already viewed that then skip-ahead. It’s packaged sturdily and professional looking, it also doesn’t feel cheaply made, so that’s a good start.

Once the opening pleasantries are out-of-the-way, you need to connect via Bluetooth or directly to your sound source. Obviously bluetooth is a preferred wire-free method except if your system suffers from bluetooth delay then that might pose a problem especially if your feedback is out of sync with the action when gaming for example. If you’re listening to music or watching a movie, then the lag is less of an issue. Setup is pretty painless, charge the device (takes 3 hours or more for a full charge) and then decide where and how you’re going to use it. First caveat, if you’re at a desk on PC and using the included USB-C to USB 3.0 connection to connect your audio, the cable is on the short side and perhaps not so much bother. If you require any sort of distance then bluetooth or an additional cable extension will be required.

The next setup dilemma you might have is how are you going to wear the device. The elasticated strap is fairly easy to put on and move around, but getting the correct tightness less so. You don’t want it too loose as you’ll lose some of the effect. Too tight and you might feel like you can’t breathe. There are a few recommended options for wearing the device. Around the upper torso at chest level under each armpit to the back with the device on your chest. Around your waist near the stomach, or rotated 180 degrees so it rests on your lower back. You will get different effects from each position but the best and most effective (if you can handle it) is across the chest.

Now here’s where it gets a bit fiddly. The biggest issue with the Woojer Strap Edge is that it requires some adjustment where its effect is greatly enhanced or reduced by the quality and or loudness of your headphones – they neatly plug into the device by-the-way. There are options to use wireless headphones if that’s totally necessary for you but you might need extra equipment to split the bluetooth audio across two devices.

If your headphones are too-loud then you obviously risk damaging your ears, if they are too-soft, then the vibrations from the device overpower the audio creating a discomforting disconnect. You can lower the haptic intensity of the device pressing up or down icons on the device surface as well as control the headphone volume from the same pad using plus and minus icons. It’s not touch sensitive so you need to press and hold or tap to get the desired levels.

Once you configure the Woojer Strap Edge correctly for music, it will sound great, with awesome bass enhancement and a real kick in the chest. If you have set it too high you’re going to feel it and it might just take your breath away – literally. A good test of bass is Megan Thee Stallion – Big Ole Freak.

Switching to a trailer and the same settings might not work as well. It’s unfortunate there are no preset modes to cycle through such as Music, Movie, Game etc. where it automatically adjusts to suit. Therefore you need to adjust the volumes and intensities to suit, again it’s a balancing act that will largely depend on how you wear the device, your own tolerances and again your audio set-up. Some trailers work better than others, so for example those with action sequences or with thumping music work better than those with lots of stop-start speaking with music or sounds in-between. A decent trailer was the Star Wars Squadrons reveal trailer making you feel every blast and explosion.

Moving-on to gaming and the effect varies depending on the type of game you’re playing. Games which have a thumping soundtrack will invariably affect the haptic feedback if it’s loud in-the-mix. Muting the music or turning it down might help if it interferes too much. However, games where the music sits right or is minimal means you focus more on the effect of guns firing, explosions and hits to your character. The latter can be quite intense depending on the game. It works really well, but again it’s not a one-size-fits-all solution, so a bit of fiddling might net better results. Player footsteps for example in one third-person action game offered a steady thud with each step, turn up the device and those thuds make you sound like a T-Rex stomping around which is distracting at best. Have the setting too low though and it feels like someone is annoyingly poking you in the chest. It’s very much a balancing act.

Moving-on to VR gaming and this is where the Woojer Strap Edge can come into its own. Again, depending on the type of content you’re playing. Naturally music based games like REZ, Beat Sabre and Pistol Whip come top-of-the-list by their very nature and are pretty awesome with the added haptic feedback. Be warned though if using bluetooth the delay can upset things here if it’s an issue with your setup. Playing shooters such as Borderlands 2 VR, Silicon Rising, Half Life Alyx as examples makes the experience more involving with the added vibrations ultimately making for a more immersive VR experience. That said, sometimes the background ambient sound effects in some games can trigger a constant vibration which means you’ll need to turn down the device if it becomes bothersome, however, this will then make things like gunshots less impacting. What this really boils down to is not having game audio specifically designed for using the Woojer Strap Edge.

To conclude then, the Woojer Strap Edge rests on the side of gimmicky which probably doesn’t come as a surprise. Whilst it’s a neat concept and works with a bit of tweaking here and there to suit, it’s not something that will replace normal listening of music or playing games. It’s a fun, well made device, that is easy to set-up and use for specific experiences if you want the extra enhancement much like 4D experiences in the cinema. Over the longer term it’s likely to get less use unless there are games and music even that design their audio around its use. It’s a cool device that is best suited to music listening than other applications. It also requires an optimal setup to be effective on a per game/music/movie basis. Your mileage may vary depending on how you use it as well. This is very much a try-before-you-buy type product.