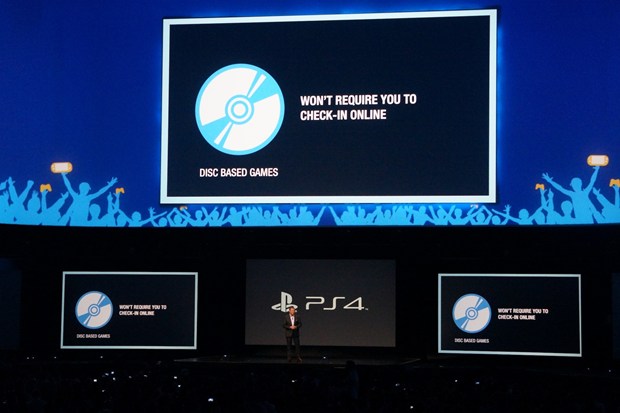 There was a bit of a playground atmosphere during the Sony E3 2013 press conference last night, with plenty of posturing and a clear talking well rehearsed presentation that seemed to deliver on all fronts. Aside from the games, there was one issue that needed clarification considering its been a media hell for Microsoft these last few weeks.  Sony, up until now had remained tight lipped on the issues that matter the most to some gamers like always online, used sales etc. Well, wasting no time to one up the competition – in an almost playful manner – CEO Jack Tretton stirred up the E3 audience into a frenzy as he announced the PS4 will not require online check ins to play, Offline play is fully supported, and gamers can sell their used games. The manner in which it was presented was definitely in reference to Microsoft’s own policy with Xbox One.

For Playstation fans, and after all the speculation surrounding Sony’s stance, Jack couldn’t be any clearer with his remarks, but were the subtle digs at Microsoft  without mentioning them directly necessary? Microsoft is doing its own thing with the Xbox One, and during its conference made no indirect reference to the competition at all. In fact, Microsoft didn’t even address the issues that have had the Internet up in arms over the last weeks. Their focus was purely on games – which is what they said E3 would be about for them. So did Sony really need to present its policies in such a poking manner.

Yes, as a trump card considering all the controversy with Microsoft’s policies – their transparency on the issues are perfectly clear now, leaving no room for misinterpretation unlike Microsoft’s vague and confusing approach.  It was also a grand move on their part to place an advantage out in the open above their competitor and along with their pricing structure, has meant Sony are now in a very strong position to gleam some sales away from Microsoft. This is big business at the end of the day, and as they say competition is healthy.

We’re not going to speculate what the outcomes can be here as both consoles hold some advantages over the other and things can drastically change, but either way, Sony provided clarification on the issues in a boisterous manner that will have surely won them some new followers.