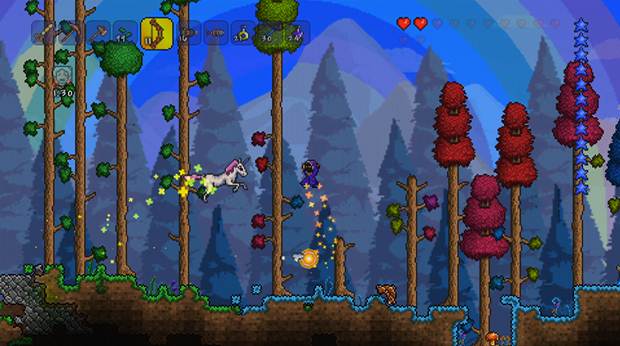 Here’s a launch trailer for the latest XBLA release of Terraria which offers more action packed sandbox adventuring. Also be sure to delve deeper with an interview with David Welch conducted by the XCN.

Welcome to the world of Terraria! DIG, FIGHT, EXPLORE, BUILD! Nothing is impossible in the special edition version of this action-packed sandbox adventure! Over a dozen environments and hundreds of items to craft and enemies to defeat! The world is your canvas – make it your own.

1. How does Terraria differ on the Xbox 360 to what we’ve seen on the PC? What will fans gain from this version of the game?

The new controls & menus—especially the crafting system and world map—are easily the most significant changes to the game. Those are the kinds of changes players will notice every single moment. The new pets, items, enemies, music—those certainly reward the hardcore fans—but there’s really something to be said for just being able to kick back on your couch, grab a controller, and play Terraria on a nice big TV set. I think that’s huge.

2. What’s the best new feature of Terraria for XBLA?

I think split-screen will really revolutionize how people play the game. It adds a whole new level of collaboration and fun—it’s really addictive!

3. Will there be any crossover content between the PC and XBLA games?

There are no plans for the time being, but it’s hard to say what the future holds.

4. Are there plans for multiplayer co-op support in the XBLA version?

It’s already in there! Especially the bosses—they’re much easier to defeat with friends. Some of them are almost impossible without help!

5. The PC controls of Terraria rely on a free cursor controlled by the mouse. How are you going to adapt the game to be playable by a 360 gamepad?

We get a lot of questions about this, and after a lot of experimentation we think we arrived at a really innovative solution. The vast majority of gameplay is accessible simply by using the right thumbstick to aim in a direction; we added a very intelligent “auto cursor” to detect the closest blocks to target. However, for precision activities such as building the player can switch to a more accurate “manual” cursor mode that behaves more like a mouse. From there, all the other controls—jumping, inventory management, grappling, etc.—are pretty straightforward and feel very natural on the controller.

6. One of the inescapable facts of Terraria is that it’s a joy to look at. How did you approach your design process and how long did you spend getting the look and feel just right?

Maintaining the look of the original was hugely important to us—and in a lot of ways, especially motivated by split-screen, we go even further to showcase the world and sprites by minimizing the amount of on-screen text and HUD elements. Every pixel was important to us, and as a result the game looks really stunning on a big screen.

7. Was the success of Minecraft: Xbox 360 Edition the reason to port Terraria to Xbox LIVE Arcade?

We actually got started on the console version of Terraria just before Minecraft 360 came out—so no, I can’t say that it was. But it did absolutely validate the decision. It was a very real concern that there simply wasn’t an audience for this type of game on console. But now that we now that there is an audience—and a very large one at that—in a lot of ways it’s added a lot more pressure since Minecraft 360 set such an insanely high bar. We want to make sure we’re able to meet the expectations of the audience. I think we will.

8. How do you see Xbox LIVE Arcade as an opportunity for young or new developers?

It can sometimes be easy for young developers to write off consoles since there’s such a thriving community on PC—and there’s such a low barrier of entry to develop on PC. But then you remember that consoles are the way that almost all of us first got introduced to gaming—and they’re still the way that most young people get introduced to gaming. There’s an incredibly hungry audience there, and tools like XNA and Xbox Live Indie Games have really opened up the platform. And with hits like Braid and Super Meat Boy there’s just no denying its power and reach. Small teams are great because you can work really fast and experiment—but consoles really teach you to be disciplined and to create something really stable, and really polished.