Microsoft released some new gameplay footage from the Insomniac Games developed Xbox One exclusive Sunset Overdrive which looks like offering some madcap gameplay unlike no other. Check out the video and be sure to view the checklist of weapons. Microsoft also revealed the Sunset Overdrive Day One Edition which comes with a number of neat extras. 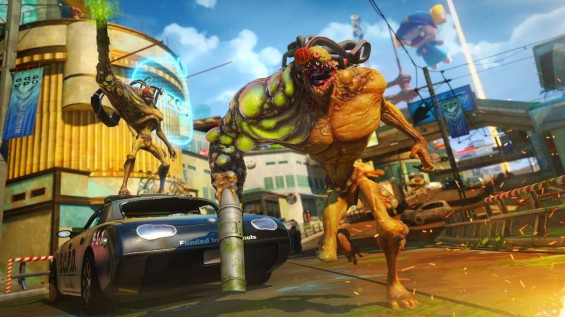 TnTeddy: Rather than use something so mundane as dynamite, the TnTeddy launches cute teddy bears that explode on impact. The idea belonged to one of the game designers — who sent out an email with no text, but an image of a teddy bear, a plus sign, and a pack of dynamite. Fire it when your style meter is ramped up (achieved by shooting enemies while grinding, taking out groups of them at once, etc.), and the plume from the resulting explosion takes the form of a teddy bear.AK-FU: Like an AK-47 but with 1000% more middle finger, this assault rifle is accurate as all get-out, and holds plenty of ammo. It’s not great for huge groups of enemies, however — so don’t bring it to zombie prom.Captain Ahab: A bottle of overcharge powers this harpoon, which can take out an enemy in a single shot. On impact, they’ll spill forth Overcharge from their tubular bodies, drawing mutants which scramble to the floor to get a sip of the sweet, sweet elixir that infected them in the first place. While they’re down, well… you know what to do.High Fidelity: A gun that fires vinyl records — and you better believe that you will hear the songs on them playing as they fly through the air. Like many of the game’s more left-field ideas, this was one that seemed absurd until a designer stuck it in… and it worked, resoundingly well. These death-records are great to fire into busy areas teeming with zombies, as the LPs will actually ricochet around objects in the game world before hitting their targets.Hover Turret: A so-called “fire-and-forget” weapon, this sucker launches a miniature helicopter equipped with a 9mm pistol, which fires at nearby enemies.Excalumune: An upgrade to your standard melee weapon, chock full of electricity and fire effects. Not suitable for children.Roman Candle: A veritable laser light show of a weapon, it fires out multicolored shots that fizzle and crack as they dance about the screen. Its high spread makes it great for dealing with large groups of mutants. And it’s festive, too!