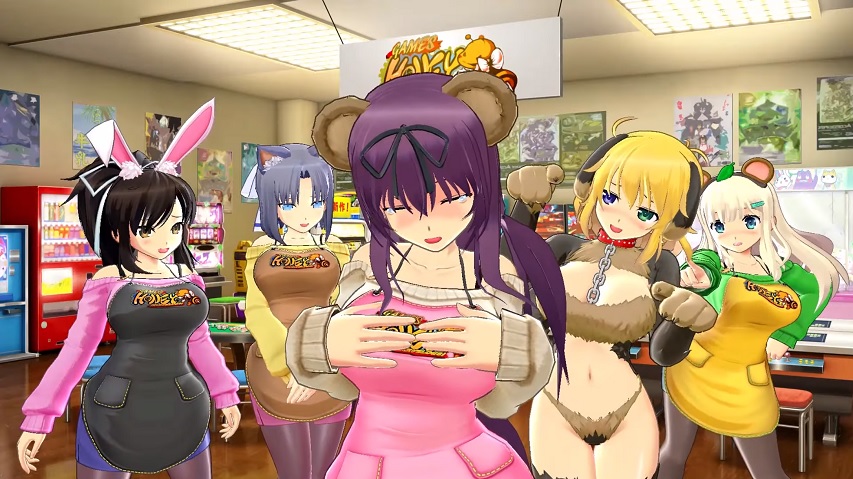 Tamsoft released its Senran Kagura Peach Ball on PC following the Switch version which released in Japan at the end of last year.The game offers some pinball madness with the girls in good form as you would expect, except this time there is a crazy story to accompany the table action.

Apparently, Haruka spills something in the arcade where she works which transforms five of the girls into wild animals. The cure, Haruka’s Peach Ball which when coupled with a pinball machine transforms them back. It’s the player’s job to hit the right objectives on the tables to proceed.

The Senran Kagura games come in variety of forms which makes Peach Ball an obvious choice. As mentioned, five standard characters include, Ryona, Asuka, Murasaki, Yumi, Yomi and then the troublemaker herself Haruka. Players can dive-in to the story mode where each girl battles through 5 stages to transform the others. A free mode option exists for those who want to ignore all the fluff. The usual suspects on offer such as the shop, gallery and dressing room for those all important costumes changes or intimate moments. Pretty much the same template as other Senran Kagura games except this time it’s pinball based.

The pinball itself is fairly simple as far as digital pinball machines are concerned. The tables aren’t particularly complex and the actions to complete them quite easy to pick-up-and-play. A handy tutorial spells out what you need to aim for when playing for those unsure how to play properly. You can just flip the flippers and hope for the best. There are two ball types based on weight and speed with only two main tables which somewhat change a little depending on the time of day or season. That’s a bit limited by any means then given the price point on PC coming in at over £35. Especially when games like Pinball FX dominate the genre with better value tables.

That said, the Senran Kagura tables are pure fan-service and very Japanese in their design. You will constantly feel bombarded with sexual teasing such as the sexy mini-games required to turn the girls back to human form. The story requires three of these per character which means you’ll witness things like: melted ice-cream down the cleavage. Hitting the balls against boobs or bottoms, various humiliation moments before stripping the girl from her animal outfit revealing her naked body. It’s all clean fun but obviously not suitable for any younger audiences. Some of the audio takes care of that for sure even if it’s full-on Japanese, so be aware of who is around when playing. You could be mistaken for watching J-porn. For older gamers this is good fun though, in the usual tongue-in-cheek way.

Visually, the tables look great, the animations really nice and the whole flavour just oozes Senran Kagura style. A shame then that despite some customization of the characters and tables it’s all a bit limited in scope. Audio is very good and the subtitled story a welcome addition to a pinball experience which in itself is quite a unique feature. Once those pleasantries are out of the way though, you’re left with a game that has some unlockables to strive for and DLC extras to buy. The latter grating somewhat given the high asking price.

All said and done though if you ignore the lure of DLC extras, the core package offers a fun-to-play pinball experience. It’s slightly over-priced though only really appealing to die-hard Senran Kagura fans. Pinball fans can get their fix from other games for less that also provide a little more diverse content. Hopefully Marvelous reduce the price in the future or offer a definitive version with all the DLC extras included.