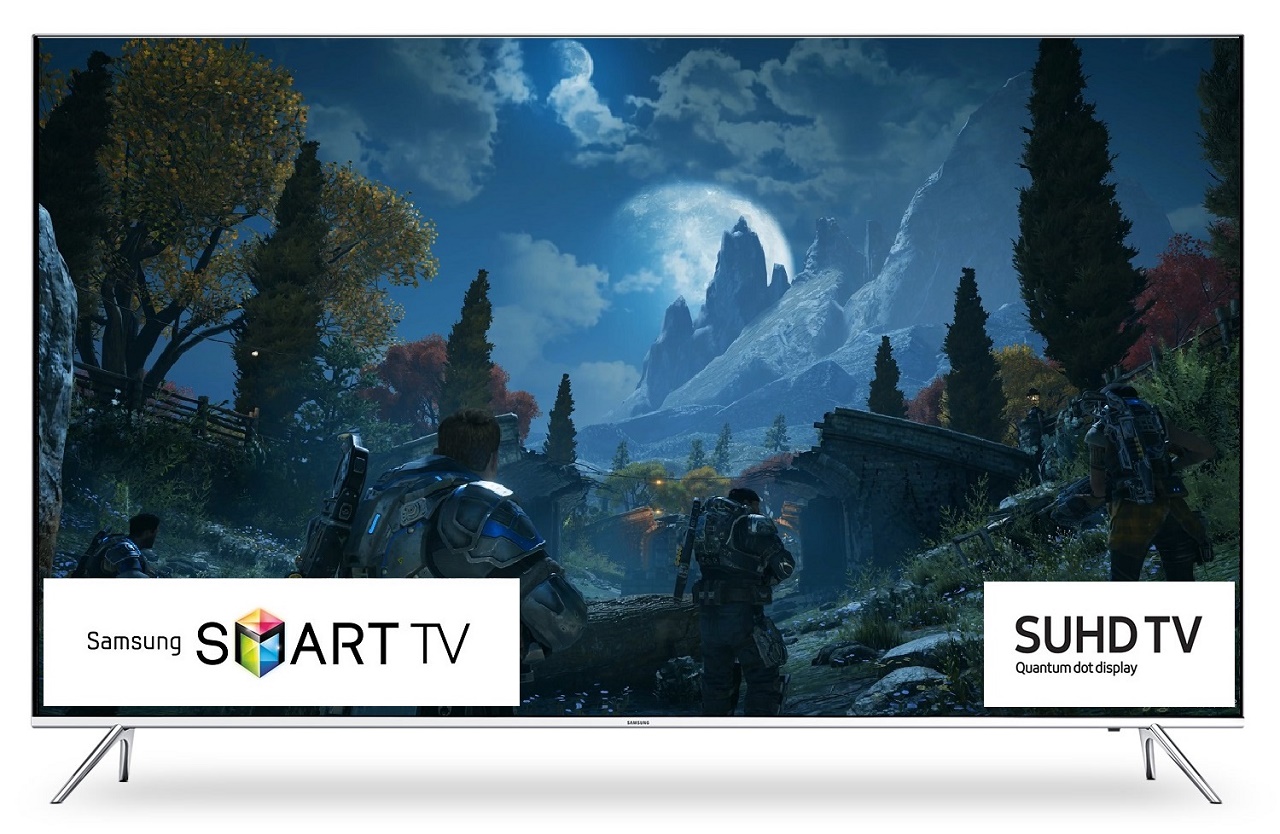 If you’re in the market for a new TV and want to upgrade to take advantage of the Xbox One S or PS4 Pro HDR 4K capabilities or just want to game on a larger display on PC then check out our Samsung KS7000/8000 review for console and PC gaming.

Today we’re taking a look at the Samsung KS7000 UHD 4K HDR TV. With the arrival of the Xbox One S, Playstation 4 Pro and next year’s Xbox One Scorpio there’s a lot of buzz surrounding 4K HDR compatible TVs. Purchasing a new 4K HDR TV is a bit of a minefield at present and anyone looking to buy a new TV needs to be through with their research before taking the plunge as not all 4K HDR TVs are the same and in most instances some which claim to be HDR compatible aren’t nearly as good as those which fully support HDR. Samsung has produced some excellent TVs in the past and their 2016 releases are great additions but if you’re serious about moving into 4K HDR gaming, then the Samsung KS7000 (that’s KS8000 in North America) is a great candidate even if a little pricey – although the adage certainly applies here, you get what you pay for. There are lesser 4K HDR displays like the KS6300 or KU7000 which can be purchased fairly cheap but these are typically 8-bit displays which lack the brightness to take advantage of HDR fully even if they can support it.

Samsung’s leading edge Quantum Dot technology paves the way for some excellent SUHD TVs in 2016 and leading the charge in the mid range category is the ultra thin Samsung KS7000 giving the European model number. In North America the same TV is the KS8000. There are curved versions such as the KS7500 and KS8500 as well if that’s your calling although some people find the viewing angle off centre loses some clarity. Offering 4K and HDR-10 compliant viewing, the KS7000 is a beast of a TV for those who are prepared to fork out its commanding asking price of around £900, but obviously over time this will come down considerably as new sets are revealed for 2017. What we’re looking at here is how well does this particular TV hold up for gamers looking to take advantage of 4K/HDR gaming using an Xbox One S or Playstation 4, Playstation 4 Pro as well as PC gamers looking to expand their horizons from more traditional monitor based play. Currently there’s little choice for HDR monitors without breaking the bank most likely due to a lack of HDR content on PC, although this scenario is likely to change in the near future. Currently Obduction and Shadow Warrior 2 are standout titles offering HDR options.

Now before we start there’s something that has to be reiterated clearly. When the KS7000 released there was a bit of confusion regarding its HDR capabilities. It’s a full 10-bit display offering a wide colour gamut and 1000 nits of brightness which adheres to the HDR-10 standard. Now several publications reviewed the TV and noted that under Samsung’s lag reducing “Game Mode” HDR could not be enabled. So if you wanted to enjoy under 30 milliseconds of delay when playing Gears of War 4 for example you’d miss out on any HDR features. Playing games under the TV’s “movie mode” would incur some 100 milliseconds of delay which for some people might hinder the play experience especially when playing competitive multiplayer games. Well, Samsung has updated the TV’s firmware which allows for Game Mode to be selected and also be HDR compliant which is great news. It’s a shame some of the older reviews for this TV haven’t updated their info.

Looking at HDR for a moment and when it comes to gaming there’s little content to take advantage of it but the main question that needs answering is why is HDR important over SDR? In layman’s terms, HDR or high dynamic range improves the lighting and colours in video games offering a more realistic look. There’s less saturated light when looking at bright lights which means more detail can be seen and an overall better contrast between light and dark areas. To give an example, Gears of War 4 on Xbox One S using upscaled 4K and HDR looks very different to the PC version running at native 4K. Whilst the native PC version at max settings clearly wins in terms of overall texture detail, the Xbox One S version feels much more vibrant and dramatic. Every spark, muzzle flash and lightning strike illuminates with a far greater intensity making for one incredible light display – especially when playing in a darkened room, the effect diminishes if you’re playing during the daytime with the sun brightening up the room. On PC the lighting effects are muted and just looks less realistic as a result. There’s also viewing distance to be mindful of here as well. On the PC, sitting close to the screen (around 2-4 feet away) you can easily see the improved detail 4K affords but extend that to 5 feet and beyond and the effect diminishes where at longer distances it become harder to spot the differences between the 4K upscaled version on Xbox One and native 4K on PC, although those with keen eyes will be able to tell. However, the HDR differences are apparent right away at any distance which is why you might hear some people suggesting HDR will be far more impacting for gaming than the upgrade to 4K from 1080p. That said, HDR rests on the more subtle side of effects when there’s no direct contrast of flashing lights against darkness or dramatic ranges of colours so is very much dependant on what’s being viewed.

Uncharted 4 on the PS4 Pro is a different kettle of fish entirely and shows off a more varied range of how HDR impacts the visuals compared to Gears of War 4’s darker tones. In our experience it’s a bit more fiddly depending on the scene and in some instances felt like the colours were more washed out and a sheen of faint white was draped across the screen making it look worse than the more colourful settings with HDR switched off. Unfortunately, the KS7000 produces a wildly vibrant image in Game Mode with HDR disabled making for rich and colourful visuals which to be frank is more animated than reality. With Uncharted 4, dialling back one’s expectations of what realistic colour looks like in video games and we found that HDR gave the game a far more realistic edge. In one instance the real time clouds looked totally convincing with HDR on almost looking like a 3D image due to how well the light and darker areas contrasted each other. Swapping between the two modes and its clear the HDR version looked so much better at the expense of dramatic colouring which in comparison felt more like an animated movie. A tweak of the settings does allow for HDR and more vibrant colours to be used but after comparing the two more muted colours felt much more natural.

The KS7000 also comes with a built in SDR to HDR conversion called HDR+ which can be toggled on and off to suit. You might hear many people claiming this is fake processing to mimic proper HDR and should be avoided at all costs. Whilst this might be true for some content, with non HDR compliant video games such as Watch Dogs 2 the visual effects with HDR+ enabled is incredible and shouldn’t be written off based on other people’s experiences. The take away here is to play with the settings to suit your own personal needs and if you like the HDR+ feature for games that don’t natively support HDR then take advantage of it. The KS7000 also includes Auto-Motion Plus which smooths out movement and with this set to auto under HDR+ makes Watch Dogs 2 feel like its running at 60 frames per second rather than 30 although some artefacts can be seen on the character when panning if you look close enough. Still, HDR+ really brought the game world to life making it a far better option than merely playing in the colour-saturated “game mode”. As a single player game, any lag isn’t as noticeable either so not an issue.

Samsung’s KS7000 might be a pricey TV set but it reeks of quality for gamers serious about 4K and HDR gaming, whether that’s playing on console or PC. The smart hub detects your inputs and saves any settings you choose for that input. A handy breakout box is used to plug in your HDMI sources although is limited to just 4. PC gaming is fast but caps out at 60hz so is something to be mindful of if you’re hoping for 120hz gaming at lower resolutions. The KS7000 display is vibrant with bright whites and deep blacks showing off HDR with aplomb. It’s easy to set up and has enough options to tinker with to suit individual needs, and if you’re not technically minded and mess around with the colour settings a handy reset option exists which means you’re free to experiment a little. As the TV is wi-fi or Ethernet connected to the Internet as an optional feature you can browse the internet for settings or speak directly with Samsung for pointers as they look at your TV settings and talk you through it (again this is an option disabled by default). Another take away here is to tailor the TV set to your own specifications rather than taking other people’s settings as gospel. By all means try what others have posted but bear in mind every TV is different and the environments they are in have an effect on the display.

The KS7000 comes thoroughly recommended as a TV for gamers and whilst it’s hard to make direct comparisons to other competing TVs in the same price bracket without placing them side-by-side with the same content, for gaming purposes this is the one you can easily fall in love with without any remorse. You’ll also get to experience proper HDR which really does bring video games to life much more than a simple upgrade in resolution.