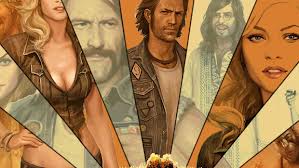 Deep Silver released a trailer for their biker inspired Ride To Hell: Retribution which is coming to this June for Xbox 360, PS3, and PC. Ride to Hell: Retribution is a rock and roll action-adventure title set in the 1960’s. Players will take on the role of Jake Conway, a man out for revenge against the brutal biker gang, The Devil’s Hand, using any means necessary.