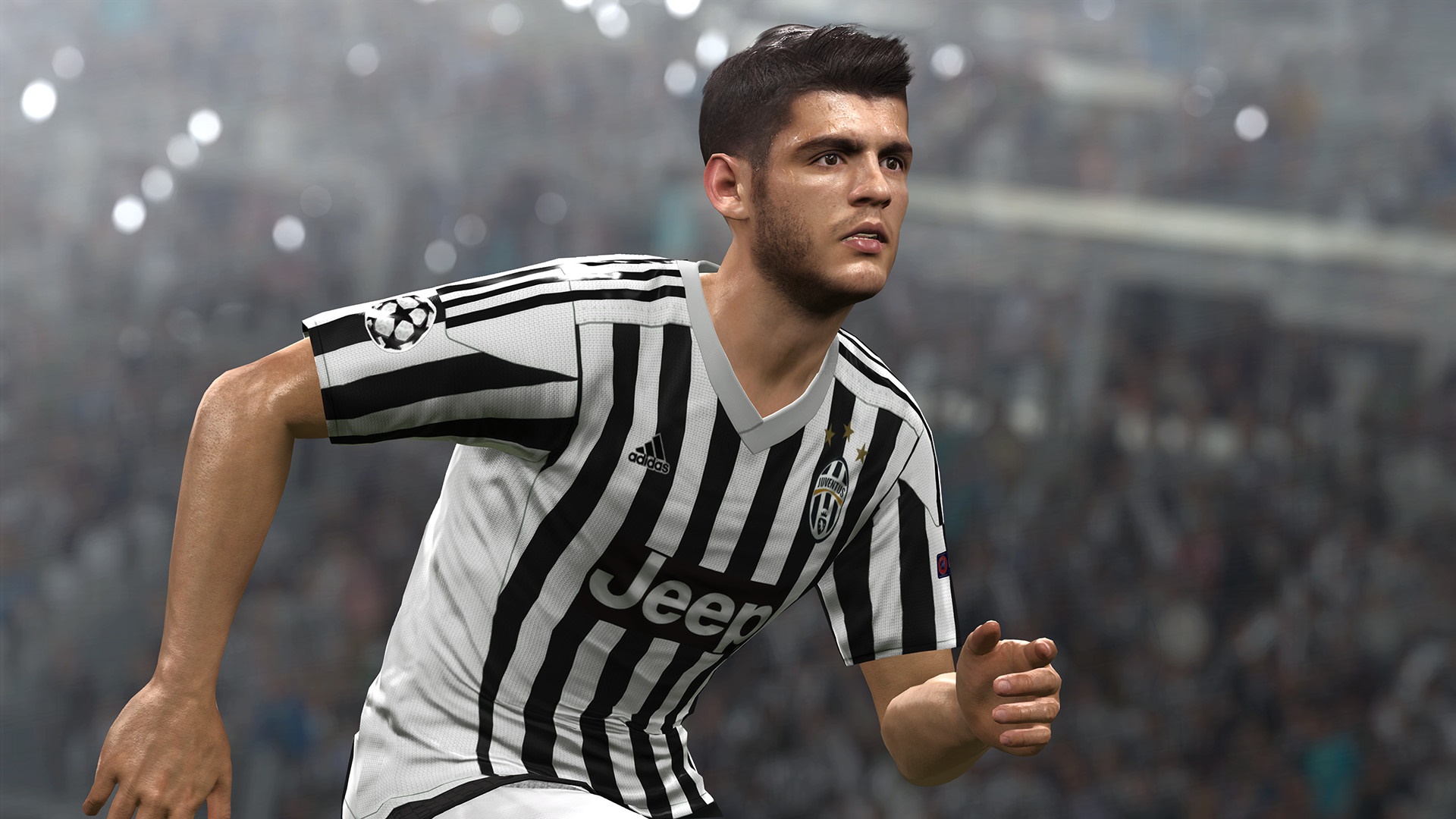 We’re back for another Pro Evolution Soccer video game with Konami’s latest release which comes in as naturally being billed as the best yet of the long running series. With its ongoing head to head with EA’s FIFA series once again we’re poised on the precipice of whether it’s worthwhile to go with Pro Evo or FIFA. Well looking at Pro Evolution Soccer 2016 based on its own merits and once again the game is inferior to its EA counterpart in terms of licensing – although we do have the full Manchester United team this time and cover star Neymar Jr and Alvaro Morata. What Pro Evo 2016 focuses on is giving the player an authentic game of football where players have the choice to tinker with the names and players to create an up to date roster that extends way beyond what EA’s game can offer. In this regard Pro Evo games have always come out on top despite the lack of glitz and glamour licencing affords.

So, Pro Evo 16 is more of the same on the surface offering a wealth of solo modes, managerial roles alongside the usual online component. Sadly, if there’s any criticisms to be made here is how slow the menu loading is due to the online connectivity taking its time to gather data. Once you look past that then there is certainly a beautiful game here. 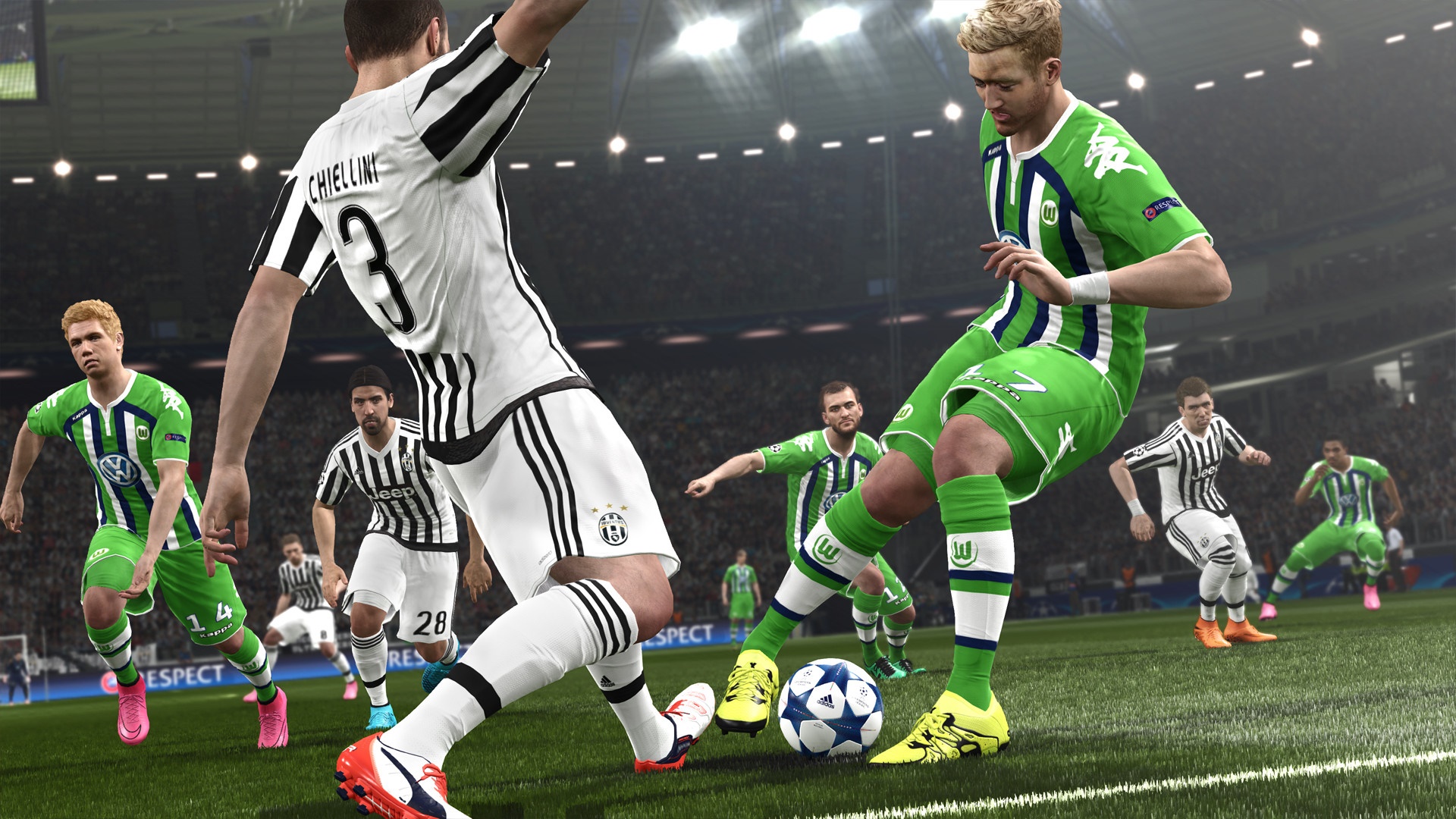 Without going into too many finer details, the bottom line is with any football game is how well it actually plays. No amount of modes and extras can make up for a shoddy realisation of the sport, and so in this regard, Pro Evo 16 delivers probably its most realistic representation to date. Konami has spent a lot of time getting the feel just right in how games play out and this is evident as soon as you start kicking the ball around the pitch. As always there’s some more intricate moves to learn if desired (you can see these in the handy training mode) but the core gameplay is intuitive and easy to get into whether you’re a seasoned pro or beginner. 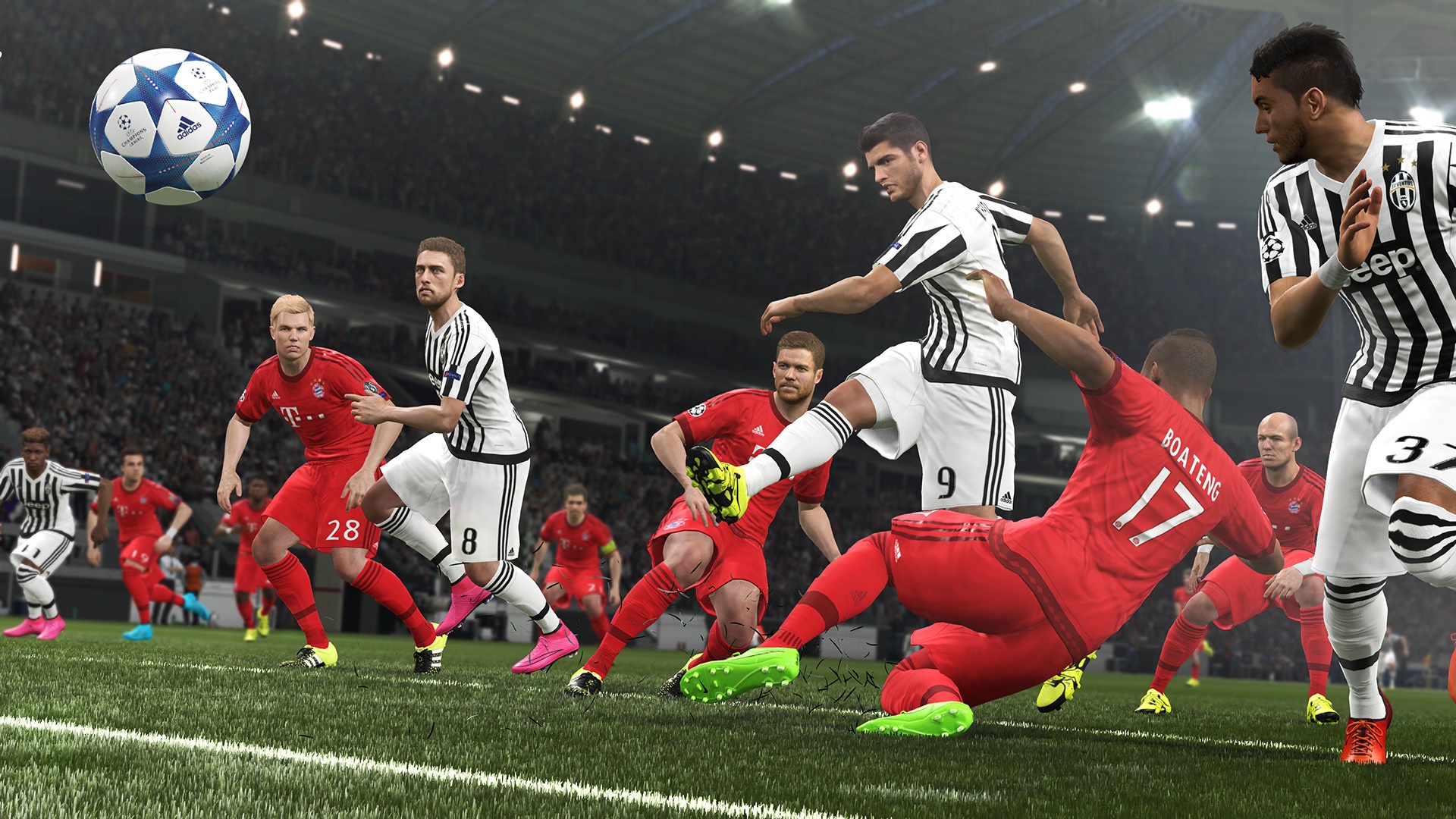 Passing, shooting, dribbling and challenging opponents is all handled remarkably well making matches feel tense and exciting to play as you would expect. Sure, lowering the difficulty can turn the game into an easy ride in scoring masses of goals, but on the default setting at least the game feels just right where scoring a goal is genuinely a cause for celebration. What makes each game feel so accomplished is how the opposition behave where they won’t allow you to beeline directly to the goal without hindrance. Defenders actually tackle you successfully, the goalie is challenging to beat, and what’s great about this aspect is your AI returns the favour (mostly). Pro evo simply feels like football which is something you could say about the previous games but now feels much more refined thanks to impressive physics and extra animations. 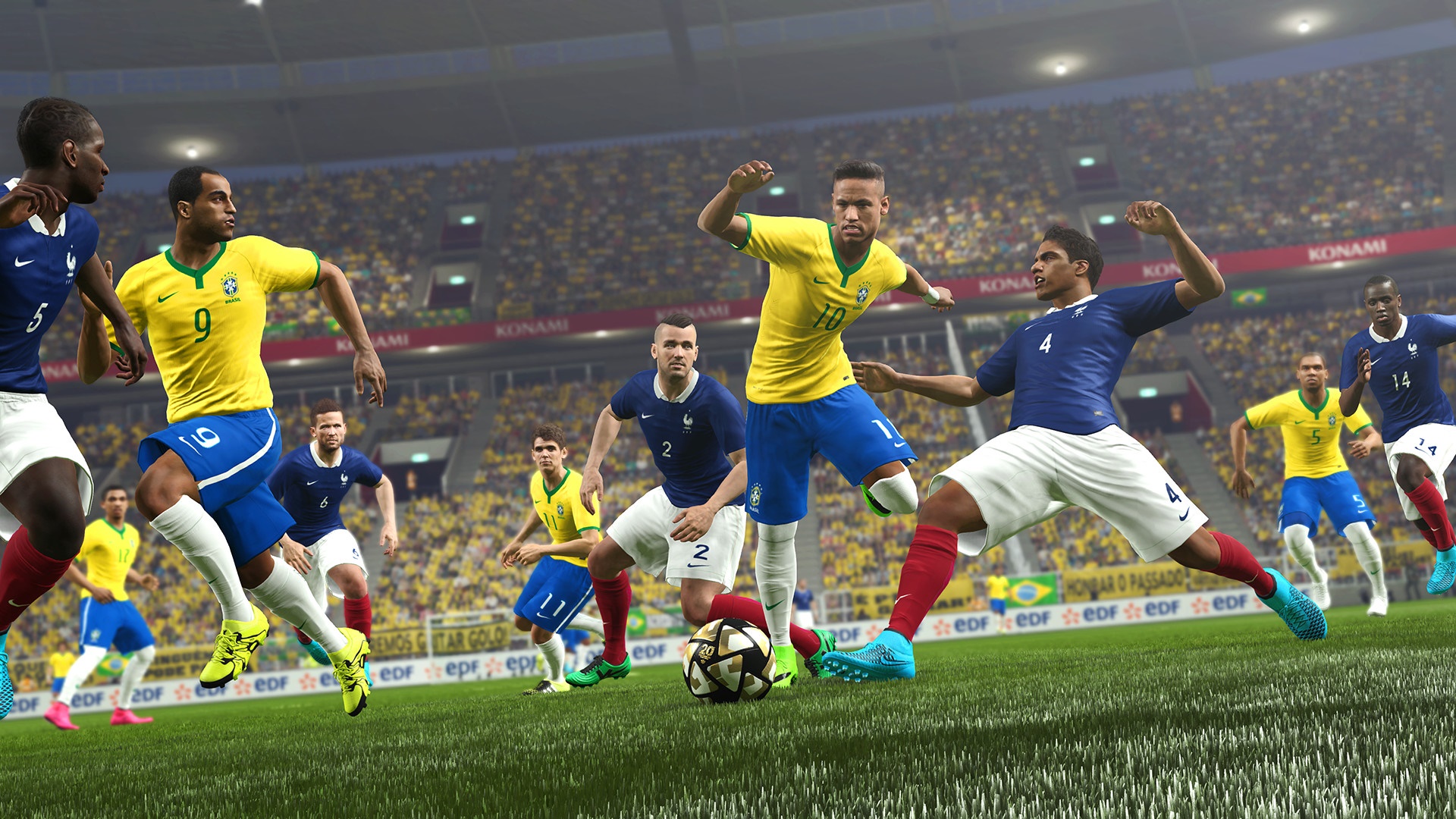 Talking of animations, the FOX engine does a fine job of recreating the atmosphere of the pitch, the look of the players and the fans with a neat selection of choices bathed in numerous conditions whether that be dynamic pouring of rain or lighting effects at night. The game looks good all round regardless of platform with very little to complain at if at all. Audio is also of a high standard although as usual the commentary can begin to grate after a while especially when there’s a delay with what is being said compared to the action. For those who want music, there’s a selection of menu tunes to tap your feet to, and what’s neat is the option to make a playlist of favourite tunes or mute them all entirely which should be a standard feature in all sports games. 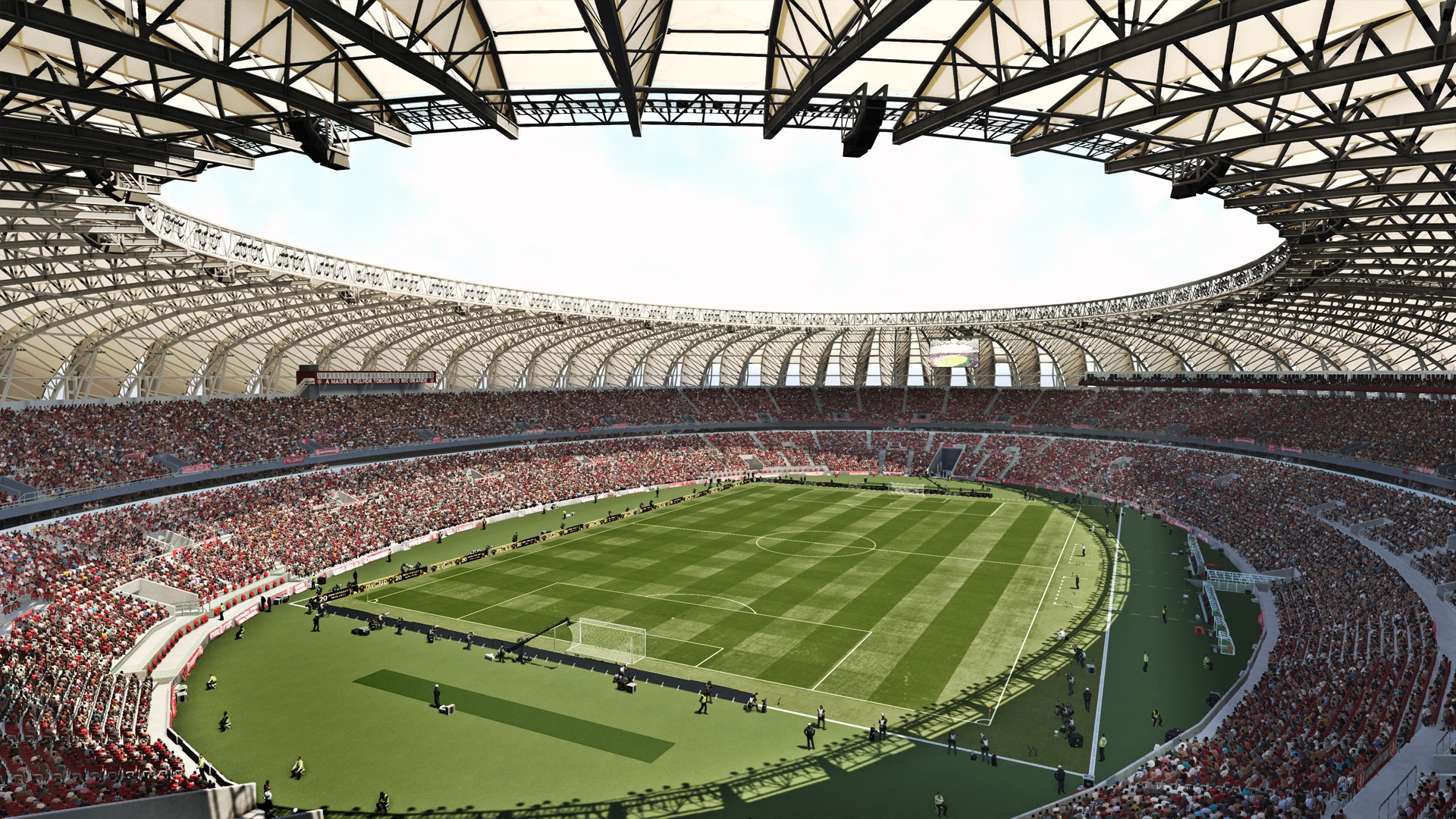 As mentioned, there’s a wealth of modes on offer in Pro Evo 2016, enough to keep players well hooked for the foreseeable future. If you’re into management then you can guide your team to victory here, or build up a specific player and work upwards. The usual assortment of cups and leagues are also on offer making the options come thick and fast despite having no official licensing. In a nutshell, you can be playing this game for years to come if that’s your calling and even skip on the next game that comes out – although that might not be what Konami wants you to do.

Pro Evo Soccer 2016 nails the art of football this year with its cool and calculated gameplay, huge wealth of options and some fantastic looks with the FOX Engine. If you’re all about the game of two halves and want to experience an authentic slice of the action in the comfort of your own home then this is the one for you. As mentioned the only real negative here is a lack of proper licensing, some slow menu loading but if you’re not fazed by this then you’ll find arguably one of the best core experiences of the game of football ever made.