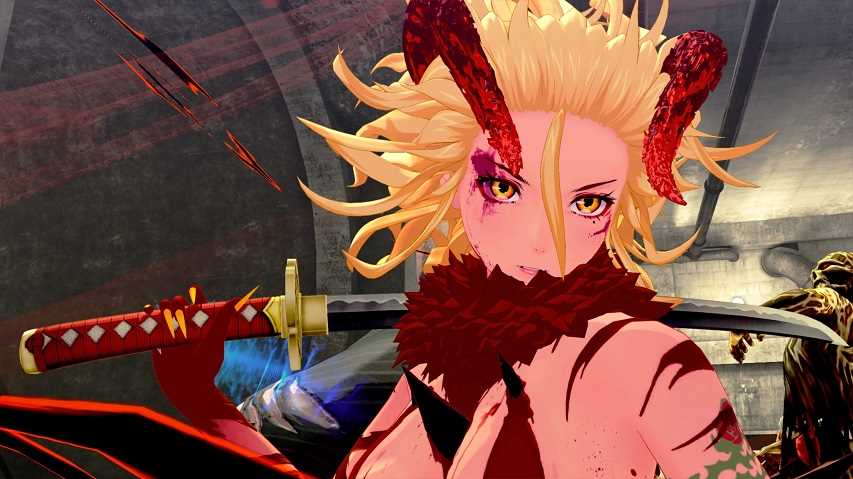 Today we take a look at Tamsoft’s Onee Chanbara Origin which released on PS4 and PC. We’re specifically looking at the PC version.

Tamsoft are well known for the OneChanbara games, with the first appearing back in 2004. Take scantily-clad zombie-busting females set within a hack’n slash setting and that’s the basics. This new entry Onee Chanbara Origin actually tells the story of the first two games and brings them into the modern age so to speak. Well, kind of.

The main story revolves around the two sisters, Aya and Saki, who come together to stave-off a residing evil involving the death of their mother and disappearance of their father. The story, whilst mildly interesting isn’t the reason we’re here. The game’s fast-paced action is where it’s at and what Origin does best is provide a satisfying simple combat system to enjoy that pretty much anyone can pick-up and play. Button mashers rejoice then, except there’s some skilful element to attacking the undead too. With correct timing, players can dish-out moves with additional power, making light work of the opposition. There are a few combos, and neat mechanics where Aya or Saki power-up into a blood rage form when blood of the zombies touches them, and dish-out extra punishment. You’ll also need to clear the blood off your weapon to avoid loss of attack power. Players can swap weapons and characters on the fly for devastating attacks. What’s also neat about this game, is the dodge and parry system, which when performed correctly allows for stunning opponents and finishing attacks. It’s quite feasible to rely solely on these moves if you so wish, making for quite a stylish combat experience.

Players battle through 25 chapters here, with a handful of boss fights tossed-in for good measure. It’s pretty basic go from point-A to point-B , what with boxed-in areas that unlock once no enemies remain. The locations rest on the side of dull and include the obligatory sewers and such-like. A few interactive crates and barrels might drop useful items such as health replenishing potions, and there’s also an option to pause the game and use said items should you require. The game on the normal setting at least, is pretty easy though, and once you’ve levelled-up a few times you can make light work of most enemies. You’ll earn coin and experience by completing each chapter where you can spend points on defence, attack power and health. The shop also provides access to rings which you can equip, offering various modifiers.

Onee Chanbara Origin sounds great on-paper at least, except there are several caveats to slice through first. Aside from using a more anime visual style compared to more recent games in the series (which might upset some players), the visuals are visceral and fitting for the subject matter. Not really something to complain about, but perhaps a step-backwards for a HD remake. The game on PC might not play nice depending on your system. Garbled audio and sub 30 fps put it into an unplayable state. To this day and despite an update, the game still does not work out-the-gate. We had to use a third party Nvidia control panel tool to lock the frame-rate to 60fps to fix the issue. The visuals also don’t scale very well to 4K even though the 4K resolution option exists. The text also changes to Japanese making navigation a pain. Again, we had to refer to the online community to set the correct English option. Aside from these niggles, the game plays reasonable well, although lacking in overall options. Audio is also pretty good, with a full English voice-over or Japanese with subtitles depending on your preferences.

Next caveat, the game is very light on content for the basic package, and as it stands the current asking price in its launch week sale is £37.19 (normally £46.49). Odd pricing indeed and a quite expensive. We cleared 25 chapters in around 6 hours and replayed a few on Hard mode. An additional bonus section unlocks when you beat the story which offers an arena mode which pits you against increasingly difficult opposition. Completion of this unlocks the story character Lei. Now here’s where things get a bit dirty, and we’re not talking about the bikini outfits needing a wash. There are 96 pieces of DLC for a total cost of £77. You can purchase individual bits as you see fit, but things like extra costumes and story content, even the unlockable character Lei is a bit rich. We can’t condone this, especially given the high price of the standard game. Tamsoft or D3, whoever is making these decisions don’t have the gamer at heart. It’s a sad situation especially with regards to the extra story content. Sure, it’s optional, but the base game is lacking in extras aside from artwork and music.

To conclude then, it’s nice to have Onee Chanbara to play, and we give thanks to character designer Katsumi Enami for his efforts here. However, the fleecing of the player and the high-price of the standard offering is shameful. The fact the game is still broken after launch with no real fix for some PC systems isn’t good either.

Issues aside, there’s a cool, fun game to play on offer here (albeit somewhat bare-bones), marred by technical hiccups and an awful DLC policy. We can’t fully recommend this game despite its merits. Once the technical issues get resolved and the pricing lowered then it might be worth a look.