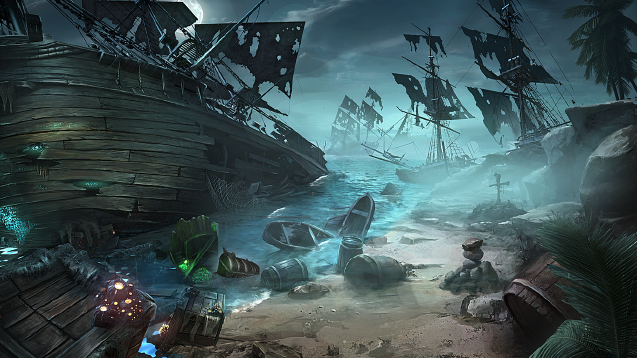 Today we’re taking a look at Polish developers Artifex Mundi’s pirating adventure game, Nightmares from the Deep The Cursed Heart which is somewhat different to the usual shooter, action and adventure games featuring the swashbuckling stalwarts. The Cursed Heart tells the tale of museum  owner Susan Black as she comes face to face with a ghostly pirate who happens to kidnap her daughter for his own ends, although it’s not what it seems as players delve deeper into the mystery and uncover the otherworldly plot.

It’s perhaps a bit hard to describe the game in much detail without spoiling, so we’ll leave the description at that. What we will say is the game presents a point and click style adventure in a first person viewpoint – as in you never actually get to see Sarah. From the offset, players are tasked with interacting with on screen items and either moving them, collecting, or placing them with others. It all makes perfect sense as you play and isn’t so taxing that it will leave your head scratching.

The game’s main element is looking for items amongst scenes filled with objects. Completion of these provides Sarah with key items to forward her quest. What is quite neat here, is the fact that players are given a choice to either spend time hunting down the items – some requiring more than just a simple click and need to be combined – or partaking in a mini game of Mahjong. This is actually a neat feature, and whilst the Mahjong makes little sense in terms of the story, having the choice is a good one.

The game is filled with plenty of puzzles to work out and these range from simple exercises to more complex matters which aren’t overly complicated. What’s interesting is the game provides its own walkthrough in case players get stuck, but somewhat defeats the purpose of the game. This is perhaps a good or bad move, depending on how much resolve one has. Younger players, or those who get stuck, will no doubt appreciate the inclusion of the handy walkthrough for when they get stuck. There’s also a hint system as well for those who don’t want to truly spoil things, but need a little nudge in the right direction.  Seasoned gamers can attempt to play through the experience in expert mode which disables a number of visual elements , making the game all the more tougher.

The Cursed Heart sports some pleasant visuals all round, with static and animated elements bringing the creepy world of the undead pirates to life. Whilst not particularly spooky, the game does a fine job of drawing players into its world with it varied locations that can be explored at will. The only negative in terms of looks are the low quality video sequences which are good for presenting the story, but aren’t up to par with the rest of the game which is a shame.

The game’s audio is sparse but effective, with some fitting music at all times offering a bit of aural colour to compliment the visuals. There’s also some reasonable voice performances during the few moments where talking is required, but is not the focus of the game, although we do hear the odd quip from Sarah herself from time to time.

In terms of length, The Cursed Heart isn’t the longest of adventures but will eat up some hours depending on how well players tackle the puzzles and if hints and the strategy guide are ignored. Once the main story is bested, there’s an additional extra scenario to play through as well. In some ways the game can be replayed for the sake of hunting the items as a mini game, or playing Mahjong, but for the most part, with no timer for a time trial, means that there’s little incentive to do so.

Nightmares from the Deep The Cursed Heart is a cool game and perhaps a departure from the norm, but works very well for what it is. Compared to other games in the same genre, this is perhaps one of the better efforts and is certainly worth a look in as a break from the usual haunts despite its brevity.  For younger players, the game is accommodating, and can be a shared experience with players sat around a TV to play together. In this regard Artifex Mundi have accomplished their goal of making a non obtrusive game that’s welcoming to all comers.