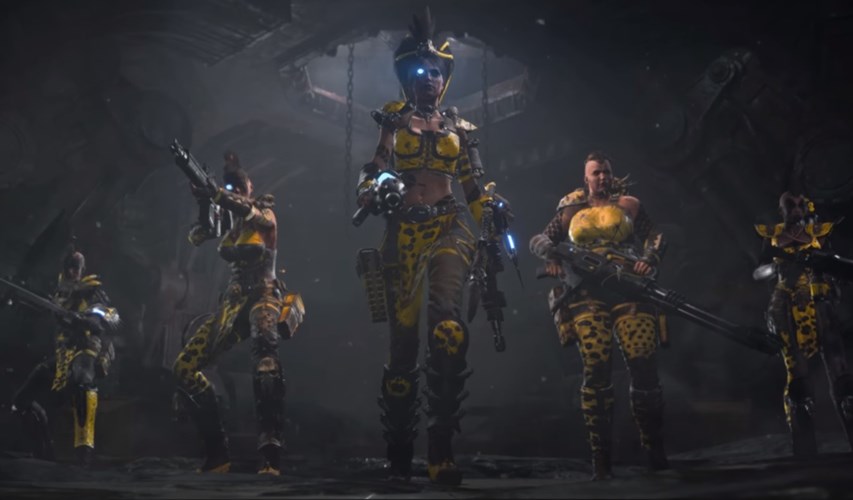 After wading through the rather elongated tutorial (the Necromunda UnderHive Wars story mode), I dabbled with character customization, battled in the Operations mode; I have to ask myself, did I enjoy Rogue Factor’s grimdark experience after so many hours? That maybe telling in itself. The fact I have to question my enjoyment level. Let’s rewind a bit first.

Rogue Factor previously released Mordheim City of the Damned back in November 2015. I thought It was fairly average, as a fantasy turn-based tactical game. Fast forward to 2020 and the team return with the grimdark Warhammer inspired Necromunda UnderHive Wars. The game features cool looking gang members across a three factions, melee weapons and machine guns. It offers the same turn-based tactical gameplay as City of the Damned, except this time there’s a completely different look, which for my tastes I actually prefer. On-paper at least I really like the look and premise behind this game, and once I stepped into the story mode knowing nothing of the lore, I was treated to some eye-opening moments.

To lay it out before you, the story mode runs you through the gauntlet of each faction, so you get to experience their unique abilities. The real meat of the game comes when you create your own gang and take the fight to the operations or online skirmishes. The basic premise of each battle, aside from taking out the opposition is to acquire resources/experience which improve your gang.

Going back to the story, to begin it features decent presentation with cool cutscenes showing the all female House Escher in action, and then the other two factions as you progress. There are turbulent times indeed as far as the story is concerned as the gangs attempt to gain control of a new power source buried deep within the underhive. Cue lots of backstabbing, hammy voice acting and posturing. I won’t go into details but it’s fairly predictable despite being amusing for all intents and purposes.

In the field then, for each mission you select a fighter, and depending on their skill, wait your turn or be the first to move or somewhere in the middle. I found it wasn’t always desirable to use the quickest aggressors first, often a good tactic to see what the opponents actions are, then react accordingly. What’s neat here is you move your chosen fighter in real-time across the open level, and can either lay an ambush (overwatch), traps (depending on class) or attack the enemy if in range. I would say, range is the most important consideration when playing this. When caught out of range with a melee or close-quarters attacker for example can prove costly. Once engaged, the game takes on a familiar turn-based approach, so you can take your time and plan an offence/defence strategy. Each class has unique skills (which you learn throughout the story) and has a set number of assignable passive and active skills. The main mode of play lets you run riot with the options, whereas the story is a focused affair with set skills for each character.

Most objectives range from collecting items and bringing them to set locations on the map for extraction, to taking out the enemy in a set number of turns. The Operation mode mixes it up, so you get a bit of both where you can attack the camps of the opposing forces, grab all their loot and take their weapons to sell, or for your own use. Naturally you can hire and fire gang members which is neat, but also create more gangs or members if desired. This means you can really experiment with a selection of classes to see what works best to suit your play style.

UnderHive Wars features some customization options which is good, but I found it a little fiddly and lacking in features. In fact, I found the whole interface to be a little cluttered and fiddly. You can spend time messing with colour schemes though to give your squad a unique look beyond the game’s default yellow, red and blue teams.

The game looks rather promising from the outside initially, and for the majority of my time here I was able to play through all 15 story stages (in around 15 hours). The problem with this game is with its execution. There is simply so much wrong with it at this point in time it’s really hard to fully recommend to anyone other than the most patient. The game did crash out on me a few times which is annoying, but thankfully it auto saves after each move. I was able to resume play close to where it crashed. I think if it happened more than it did then I would have felt inclined to simply give-up. In-game issues though pose more of a threat to one’s enjoyment especially the AI. There are too many instances of bugs and ill-behaviour to mention. Highlights include, running on the spot wasting precious movement points, illogical actions, minutes to decide what to do next (although a patch sped this up), getting stuck on the scenery, glitches which hamper progression.

Rogue Factor claim to be fixing the most glaring of issues the game has at present, but progress is slow. Also consider this isn’t an early access release, so it’s laughable that it released in such a poor state. One section in the story mode, I had to look-up online to locate the solution (something I never do) and it was a glitch making the level impossible to finish. It must be bad if you can’t finish the tutorial! Luckily it’s optional. Since it has been a while, I assume they have fixed the story game breaking glitches by now, but I can’t confirm that.

So to recap then, I like the idea of Necromunda UnderHive Wars. It offers a grim yet neat visual style and looks pretty decent on PC (especially in 4K). The gangs are cool as are their weapons and limited customisation. The turn based combat is also good and I really like the verticality of the levels. So what’s wrong then? Well, if the game is broken or doesn’t work properly for the £35 asking price, then what’s the point? At release it was a nightmare and not worth it. I would have told anyone to simply ignore and wait for several patches…whenever they arrived.

To be less critical though, as it stands in the here and now, there is a fun game if (and that’s a big if) you can overlook the many negatives. The basics are in place for a game you could potentially sink many hours into (like I did). For anyone looking to experience a bug free game that simply works out the gate, they won’t find it here. With that in mind, I do hope Rogue Factor simply don’t jump ship, and instead strive to iron out the kinks. Once that is done, then we can talk. Until then, I cannot recommend the game.