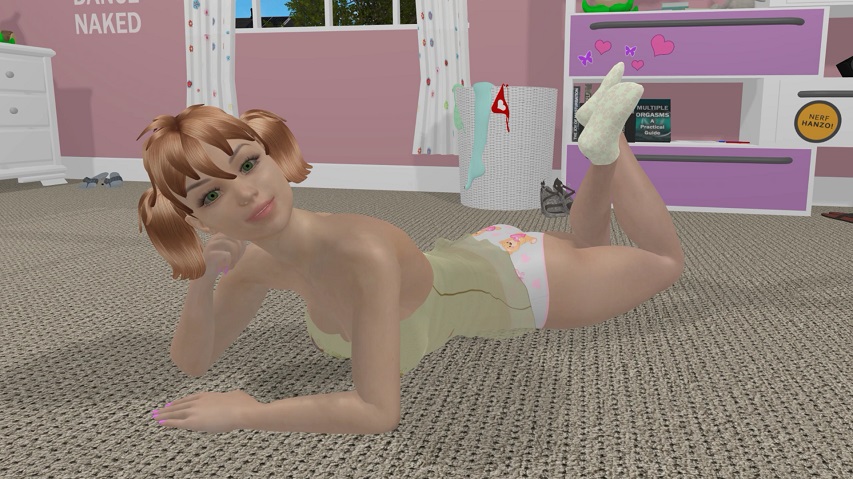 Happy Fun Times Games released its voyeur themed game Mandy’s Room for PC/Mac and for VR users. It puts players into the center of the experience as a robot toy (Mr. Jenkins). The game’s protagonist, Mandy is an 18 year old teenager who buys the toy which can read her thoughts. She places it in her bedroom where you the player can see her go about her business. However, what starts out rather innocently, becomes more sordid as Mandy reveals her inner secrets. Take a look at the Mandy’s Room gameplay preview video to get an idea of what to expect. However, we haven’t shown, or spoiled the numerous sexual scenes which become apparent as you progress through the story.

Diving in to Mandy’s Room in VR players are limited to looking around, but there is opportunity to lean in for closer inspection. Interestingly, Mandy will ask players to nod their head to answer her questions which is quite neat. Obviously if players want to role-play then you can speak but this has no effect in-game. Mandy goes through various scenes which include, hoovering, Yoga, dancing, lying around in the nude, sleeping and working on her laptop. However, there are more adult scenes where she plays with herself. There are moments where the player can speed-up or slow down her actions by nodding, even better allowing her to orgasm or holding it.

The concept here is very good and quite unique for a VR game. Whilst there is no touching interactions, the narrative element is well-presented and draws you in. Perhaps the biggest positive here is the voice acting. The actress does an excellent job of conveying Mandy’s thoughts but also her sexual sounds. The audio overall is excellent and a big part of the game’s appeal. This game can, and will cause a stir no doubt. The only criticisms here are some of the animations could be better, and perhaps there is room for player customization of Mandy. It would be great to be able to choose her skin tone, face, hair and such like. It would also be good to see Mandy in other areas of the house.

Either way, this is a cool game to play and makes a change from the other adult VR games that all offer similar experiences. If you like the sound of being a voyeuristic robot, then check this out. The game is available via Nutaku or Steam (September 26th).