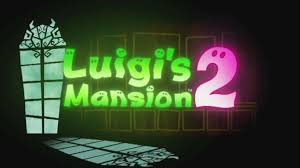 After a 10 year break from the spotlight, Mario’s brother Luigi is set to return in the next installment of Luigi’s Mansion which you may remember from the Gamecube. Luigi’s Mansion 2 has players strap on the ghost busting Poltergust 5000 whilst they investigate the spooky mansion. The game is releasing exclusively on the Nintendo 3DS on March the 28th. For more details see the press release below as well as visiting the official site. 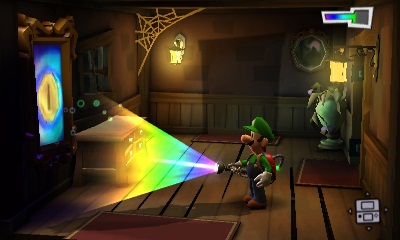 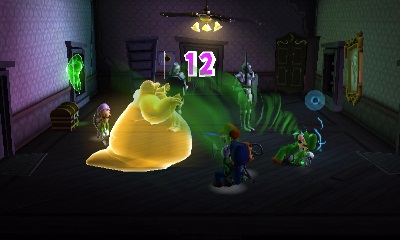 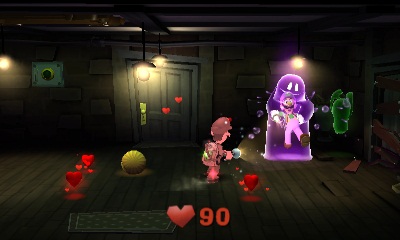 Step into Luigi’s quaking shoes, strap on the Poltergust 5000 – the ghost-catching and puzzle-solving vacuum cleaner – and clear out all the ghosts in Luigi’s Mansion 2, launching exclusively for the Nintendo 3DS family of systems on 28th March*.

Luigi returns to help his mad-scientist friend, Professor E. Gadd, by sucking up the ghosts in each of the mysterious mansions filled with puzzling contraptions that must be manipulated to proceed. Armed with a torch and the Poltergust 5000, which can be upgraded with new features such as the Strobulb light to stun the wacky wraiths and the Dark-Light Device to reveal invisible clues and objects, Luigi is fully equipped to tackle any paranormal activity!

As you explore, keep a close eye on your surroundings and investigate every nook and cranny to bring the secrets of the mansions to light. Experimenting with the Poltergust’s functions to either suck things up or blow them away will often be key to making your way: rolling up a carpet may reveal a concealed switch, while peeling off loose wallpaper can expose a secret doorway. As you come up with different ways to use your tools, you’ll also uncover fiendishly hidden gems for your collection and gather stacks of cash to gain equipment upgrades on this Nintendo 3DS game

The adventure is brought to life with rich, cartoon-like graphics in immersive auto-stereoscopic 3D. Each mansion has its own characteristics and equally the variety of ghosts roaming the mansions’ halls and rooms are full of personality, fun and mischief, lending a light-hearted touch to the exploration of the haunted houses.

In addition to the solo adventure, up to four players can get together locally or online to venture into the Thrill Tower in the multiplayer mode, where each controls a differently-coloured Luigi to tackle three varied challenges awaiting on its floors. In Hunter mode, work together to hunt down ghouls and clear each floor before the clock strikes zero. In Polterpup mode, chase the adorable ghost dog with your Dark-Light Device in tow to catch him. In Rush mode, frantically hunt for the escape hatch that allows your team Luigi to climb up to the next floor.

Nintendo of Europe reveals that the European retail package of Luigi’s Mansion 2 will have an exclusive glow-in-the-dark cover while stocks last. Players who pre-order the game may also receive a limited edition Boo Anti-Stress Ball to settle their nerves when the going gets too spooky!

For more information about Super Mario games head on over to the official Nintendo UK website.

If you’re looking to pick up the awesome Nintendo 3DS handheld, then be sure to take a look at the official 3DS page on the Nintendo website.