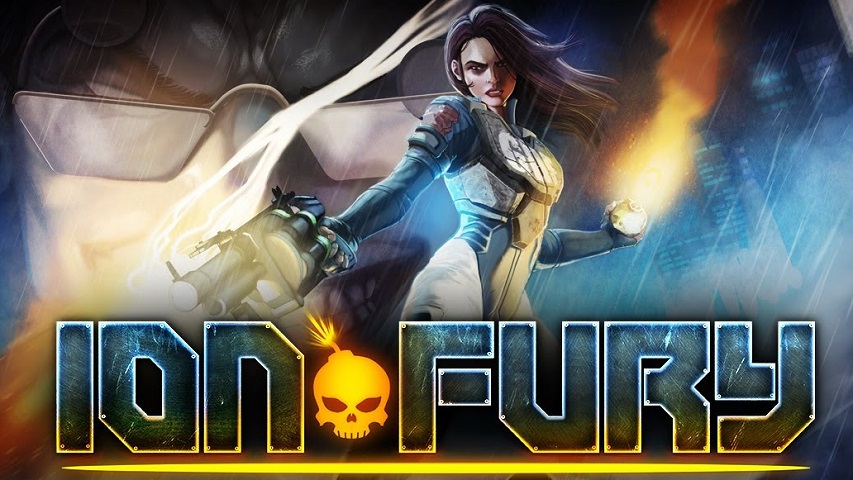 The creators of the infamous and classic first person shooter of yore Duke Nukem, 3D Realms team-up with Voidpoint. The Build Engine makes a return in the form of Ion Fury (previously known as Ion Maiden). Law suits from aged rockers aside, Ion Fury steps back in time to offer a heady mix of fast-paced visceral visuals amongst a first person shooter back-drop. The bottom line is, if you liked Duke Nukem 3D then you’ll love this.

We played the PC version and will state from the off there isn’t any controller support. Apparently there is but in the build we have wireless Xbox One controller doesn’t work by default. This means you either use the default mouse and keyboard or use something like Xpadder to muscle your way through the twists and turns. We opted for the latter and found it pretty solid despite some floaty movement and less accurate aiming.

Ion Fury presents a futuristic setting with a female protagonist who in her own right has enough wise-cracks and one-liners to rival her male counterparts. Without getting into the politics of a bad-ass female lead we can only suggest it’s pretty immaterial. You’re kicking-ass regardless and that’s what counts here.

The general idea of the game is to hit switches, find keycards and progress through the levels taking out anyone who gets in your way. The cult based enemies come in an assortment of guises and generally adopt distinct attack patterns using a variety of weapons. Players choose how to dispose of them with their own arsenal of shotguns, grenades and machine guns to name but a few. It boasts fast-paced, silky-smooth combat and is extremely satisfying to turn your opposition into goo.

Ion Fury offers an immersive feel due to the interactions with light switches, lockers, camera feeds and secrets areas. Level destruction comes as a feature although generally feels scripted into the levels. Ion Fury feels like Duke Nukem 3D part 2. If you ever wanted a continuation, then this is certainly it.

Looking at the visuals and it’s clear they are not up to par with modern first person shooters. As an old school shooter with a retro vibe though, players should easily forget about the low-res textured sprite graphics. That said, these are an improvement over the old school style with neat weapon attention to detail among other things to look at in passing. Audio is great with its thumping soundtrack and the voice-overs and sound effects are repetitive but on-the-money.

This is a fun game harking back to the old-school with a little bit of modern flavor added in small touches here and there. It’s a solid game and well worth the price of entry for any Duke Nukem 3D fans. Anyone else will also have a blast collecting health, weapons and not relying on waypoints rather than current gen regenerating health and assists. It’s tough as nails on harder settings too, and sits as a pick-up-and-play experience worth checking out even if you don’t dig the retro style.