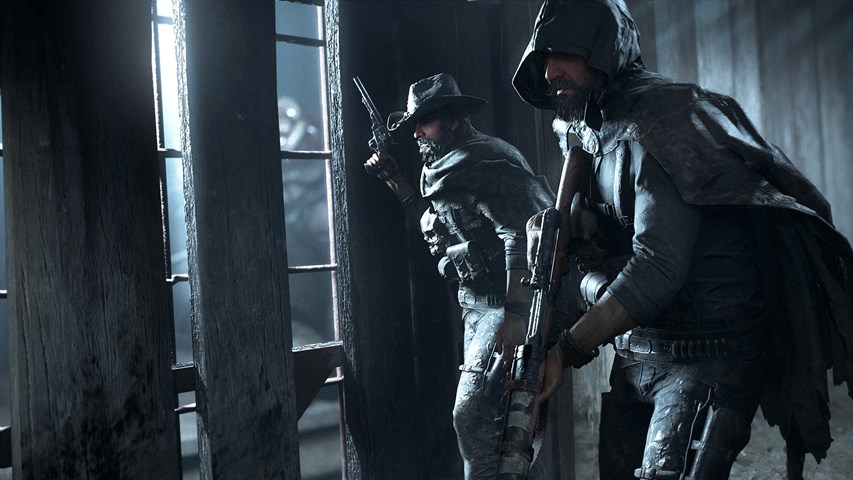 The premise behind Hunt Showdown is you’re a bounty hunter for hire in a world based on a fictitious New Orleans western setting around the end of the 19th century. It’s not your typical western scenario despite the hallmarks of spurs, bolt rifles and quick draw pistols. There is a touch of the supernatural thrown-in to give it an edge. This manifests itself with human powers to banish demons, use of a special ‘Dark Sight’ vision mode and fighting against an assortment of horrors. Expect demonised humans and grotesque abominations lifted right out of a horror experience as the AI controlled detractors. Then there’s the other bounty hunters (human controlled) who are perhaps the biggest threat here for the solo-player.

The main meat of the game is the Bounty Hunt mode where 12 players spawn on the map as either teams of two, or solo hunters or combinations of both. There is an option to enable teams of three if you have more of a death-wish or want a greater sense of team spirit with your friends. The objective here is mostly PvP with some objectives tossed-in to make things more interesting. The maps fill with a selection of AI controlled enemy types ranging from easy-to-kill grunts to tough-as-nails and avoid like the plague monstrosities. The main objective lies with gathering clues to find the location of the main AI controlled bosses. Once found, players take out the boss either by themselves or as their team and then banish it from the map. At any point other players can attack the aggressors and steal the loot for themselves. If you manage to banish the boss, you collect its loot and then strive to reach an extraction point. It’s no easy task considering the remaining players can attack at any time. If you make it to the extraction zone, you then have to survive for a further 30 seconds before it’s mission complete. It’s a lot of work for seemingly little reward and frankly a lot of players opt for pure PvP rather than the going for the actual objectives.

The idea behind the objectives is to encourage players to aggro each other without resorting so much to camping. The objectives make it easier to find the other players if they are playing by the same rules. Considering there are no indications as to where the other players are or how many there are make its a very tense experience. It’s entirely feasible to ignore all the objectives and spend up to an hour skulking around the outskirts looking for opportunities to strike the unsuspecting. It’s also entirely possible to be the only character left on a map. But you wouldn’t immediately know this without taking the risk first and attempting the objectives alone.

As a solo player then, this mode puts you at a distinct disadvantage especially coming up against a team of two. So what do you do then? Luckily the maps are pretty sizeable which means you won’t immediately bump into another player. Audio plays a massive role in how you navigate the maps. Every footstep, disturbed birds, barking demon dogs or more obviously gunshots alerts other players to your presence. The maps come littered with all manner of inanimate objects to give your position away too. Thankfully, playing stealth is a safer option and mitigates the noise making somewhat. Having some knowledge of the maps helps also. You can quite easily sit and wait-it-out avoiding conflict, and then loot the corpses of the fallen from their battling with each other. Or play the waiting game and clean house once the coast is clear. Alternatively, you could gather the clues and then extract from the map. All actions gain XP and progression for your character. However, if killed then your character can’t return ever. It seems punishing but not in the way your new character doesn’t stand a chance. On the contrary, with an overall player progression which unlocks more gear, you can equip any new-blood with a decent arsenal of guns and equipment until your money runs out that is. It’s a pretty robust system filled with perks and for the solo player encourages keeping your character alive for as long as possible. That said, death is only a setback and not the end of the world.

The Bounty Hunt mode is just one way to play the game as a solo player, as an alternative a solo specific mode exists in Quickplay where it’s every solo hunter against each other (10 players). However, there is a twist. Players race against the clock to draw energy from wellsprings to save their dying character. Once players close four rifts players can draw from the wellspring energy. However, as you expect the other players compete here making it very tough to survive. As the name implies it’s a quick PvP mode with rounds lasting about 15 minutes compared to up to an hour of the Bounty Hunt mode. The Quickplay is a less stealth-based option though so be warned.

With the heritage behind Crytek and their Crysis games, Hunt Showdown looks pretty fantastic with all the bells and whistles cranked-up in 4K. Our RTX 2080 Ti managed to play relatively smoothly here with FPS ranging between 50-60. With AA options such as SMAAx2 which chug the GPU resources players should find a comfort zone for their system given the choices available.

Crytek plan to add more to this game post-console release and seemingly listen to fans for suggestions with regards to balancing. As it stands though with the two modes on offer, expect to sink in plenty-of-time in this slow-paced methodical thinking-mans shooter. It’s no quick-fix experience a la Call of Duty and as a lone stealth player can feel lacking in the action department. However, there is a massive rush reaching the extraction zone after you’ve sneaked around and gathered some points. Avoiding other players genuinely adds increased tension and fear. This works in the game’s favour and makes it really fun-to-play even if it’s quite unforgiving.

Can we recommend Hunt Showdown then as a solo player game? Yes, totally. Whilst it’s not really story-driven and you have to take your chances with the wider community to make progress. You can still have a lot of fun sneaking around collecting clues and taking out AI controlled characters. If you do get the drop on human adversaries then it’s your choice to risk all and engage or stay hidden in the undergrowth until the danger passes. You might get lucky and manage to take out the boss too and make it all the way back to extraction, but that’s tough-as-nails for the experienced solo player. It’s all risk and reward here and we like that.