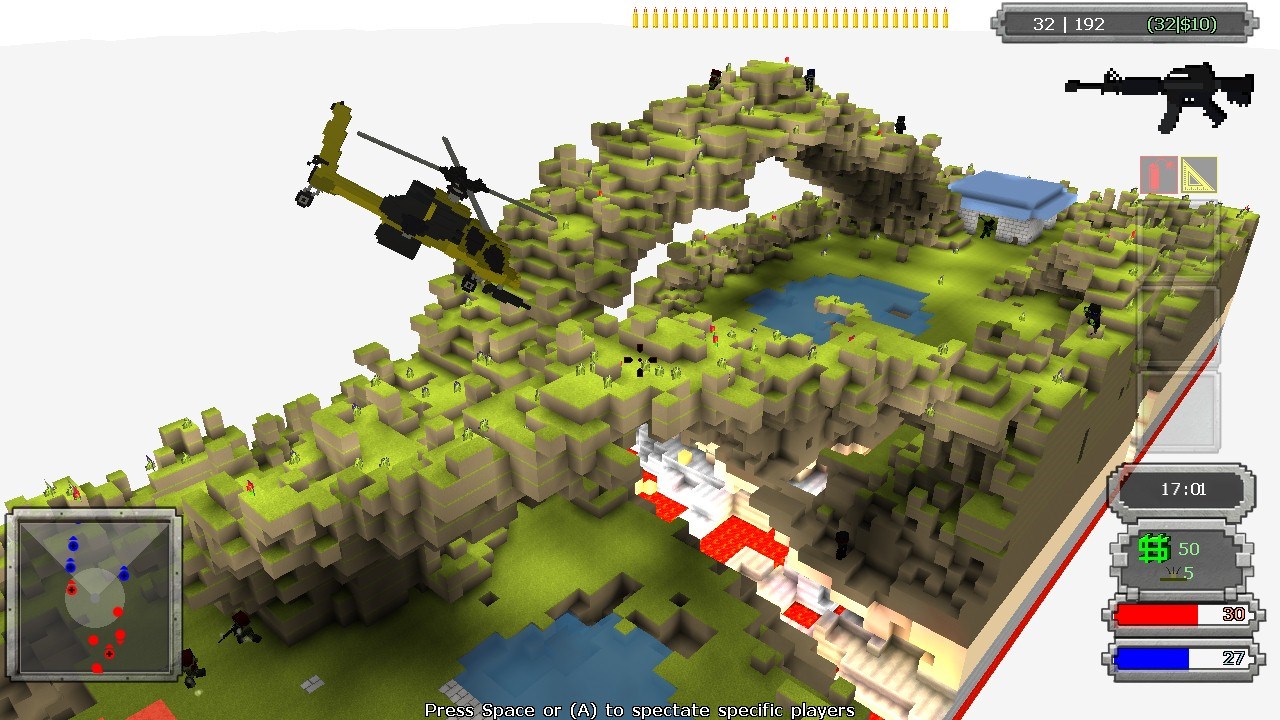 Today we’re taking a look at Exato Games’ Guncraft which is available now for PC via Steam and offers some multiplayer madness using the popular Voxel based geometry which allows players the option to create worlds, weapons and edit character classes in the one package. However, aside from all the creative elements, how well does the core game stack up?

Guncraft’s main appeal is focused around the option for players to destroy or build objects in the multiplayer game. The use of traditional firearms makes what looks like a Minecraft clone, something entirely different, so think Call of Duty style gameplay complete with perks to get an idea across its variety of game modes on offer.

Being able to drill a hole in a wall to get through, or dig a tunnel under the enemy is an excellent feature and one that sets the game apart from its peers. Except, there’s an inherent problem with the idea which seems exemplified by a lack of tweaking from Exato to make sure the play experience remains fun.

Playing games like Team Death Match and such like starts out fairly tame, but once a few tank shells and RPGs have let rip on the level – even simple mining of blocks –  creates unmanageable levels of uneven terrain  around the areas players are most likely to encounter each other.  This leads to falling into holes and having to awkwardly jump out or use a grapple hook to escape – except not all classes use this secondary weapon. During frantic firefights, the added hazard becomes a hindrance rather than a cool dynamic element. A solution would have been to keep the base floor indestructible.

Another problem with the core game are the maps, which in some cases are way too big to suit the fast paced gameplay. There’s a lot of running and jumping around looking for other players to kill, and whilst what some of the community has accomplished with the tools is incredible, it seems some maps are simply not practical for multiplayer gaming despite how cool looking they might be and how much effort was put into their creation.

That said, and for all its negatives, there’s plenty of fun to be had with the tools and a good selection of maps available by default.  The game sports a neat roster of game types including racing and oddities such as Meteor Survival. One such mode Lava Survival has players attempt to reach new heights to escape a rising tide of larva using the building tools which is an interesting way to implement building into the gameplay. There’s fun to be had in multiplayer matches where quick thinking moments such as building new cover and laying traps during a Deathmatch game adds a tactical element; and simply being able to destroy anything in the world around you is appealing. Guncraft has its own onslaught survival mode which becomes a frantic mass of enemy spiders and suicidal gunmen that’s very cool to play. So Exato have covered most bases to keep players happy.

On the other side. Players can spend hours, days and weeks building worlds using fairly easy but time consuming tools to create whatever they fancy. There’s a real community spirit to the game, with a number of maps being submitted by gamers, and players having the option to vote for external creations. As the name implies, players can also create weapons using the building tools, but sadly – and this is where the game becomes a bit too exclusive – there’s simply no tutorials or guides to help new players try their hand at something. It’s like Exato have said, here’s the tool box, now go and work it out for yourselves.

In terms of graphics and stability, the game runs pretty smoothly with its simplistic interface and design features, although most issues and glitches come from poor connections and issues attributed to the deformation of the terrain.  The audio is also a little lacking and could have benefited from a wider array of sound effects, especially ambient sounds.

To conclude, Guncraft is an easy to play pick up and play multiplayer game which has some neat ideas, but are simply badly executed or plagued by issues which impact the gameplay too much. With a little more refinement in some key areas, could make for a much tighter gameplay experience that’s enjoyable and worthy of your time. At present, the game is bare bones for newcomers looking to create content which is a shame, but full of features for players who just want to get stuck in and play. If you can get over the odd terrain, some blindingly painful to look at maps, glitches, and some wonderful but not appropriate map designs, then Guncraft is for you. If you don’t get the whole building, crafting and voxel style game then this probably won’t win you over. That said, for the price, there’s some good value here although could have prolonged the life a bit more with some single player content.  Guncraft is a Fun but flawed game which hopefully will address the problems in the future.