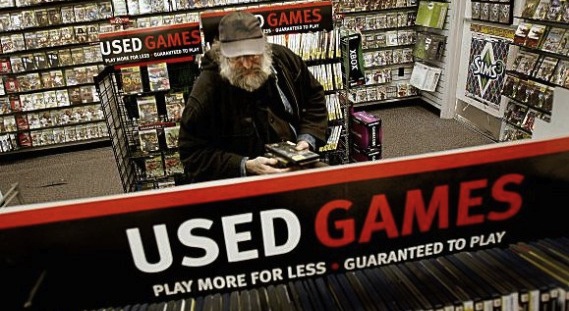 UK trade magazine MCV has posted reports from one retailer how Microsoft intends on monitoring the used sales scenario for its Xbox One console. Apparently, retailers will have to sign up to Microsoft’s own cloud based system, so that when a game is traded in the installation on the original  game owner’s console will be deleted so it can be passed on to the next person. This would explain why the Xbox One needs to be connected to the cloud every 24 hours. What’s also suggested is, retailers can then sell the used games at whatever price they choose but Microsoft and the publisher of the game will take a cut from the sale. Whether this will make the action profitable for retailers is yet to be seen, but what has been suggested by one high street retailer we spoke to this morning  is retailers will possibly stand together and agree on offering lower credit for these games so that their mark up isn’t impacted so much.

As an example. If Joe Bloggs takes an Xbox 360 game into a store at present, the store might offer an agreed £20 credit or £15 cash. The store would then sell the game on for £30 or more. With Xbox One games, the store might only offer Joe Bloggs £15 credit or £10 cash, then sell the game for £30 or more. Once Microsoft/publishers take their cut, they will still have made the same £10 or more profit from the transaction.

What this does suggest if indeed it transpires to be the case, is consumers selling games to stores will be getting less returns for their trade ins. It seems very unlikely that retailers will continue to offer the same rates on used games as they do now, leaving them with less profit and keeping the consumer happy. Gamers selling used games to stores is all about convenience, and if the option of selling privately is removed from the equation, then retailers are at liberty to dictate the value of trade ins with a take it or leave it approach which many are using today. On the flip side, if gamers get less returns for their used wares, then this in turn means spending less in stores – so a fine balance would have to be used.

It might be possible to see the value of games by looking at the PS4 versions and using those as a guide, but it’s possible Sony will leave the option up to the publisher if they want to adopt the same approach as Microsoft. The whole used sales market will be up in the air from a consumer perspective, unless there are some real enticements for either A) simply keeping the games and B) being offered discounts and other incentives on future purchases from Microsoft, or the publisher seeing as the transactions will be connected to a cloud based system which communicates with a users console.