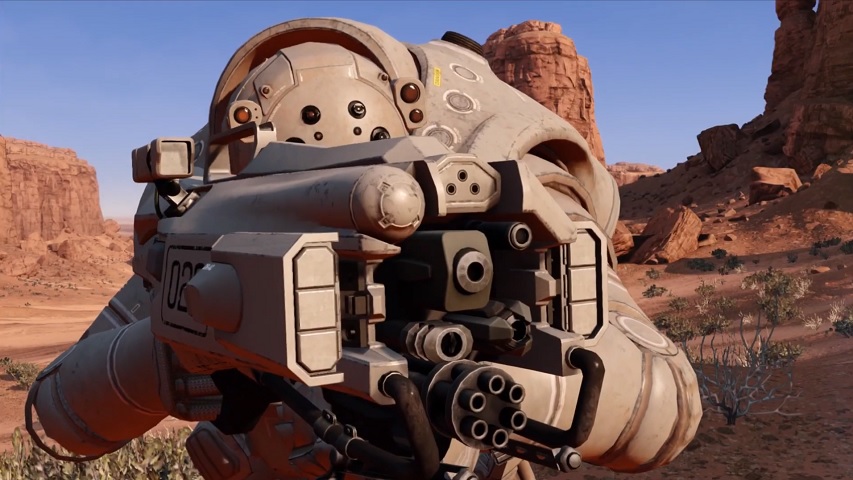 Take a look at some really cool Exocorps gameplay from the Steam early access build which released for PC on October 9th. There’s still lots to do for this game in terms of features, but it plays well and looks great to boot. In this video we play TDM, and DM modes against bots. A capture the flag mode also exists here. There is an online component versus human/bot combinations ripe for the taking. The inclusion of bots to practice is must for this type of game, so we’re thankful they are available here to make up the numbers.

What’s neat about ExoCorps aside from the rocket boost jumps giving great sense of verticality, is the balance of systems you can use for defensive, stealth and offence. You get one power meter which is shared across actions, so there’s a bit of tactical play in there as well. So for example, you can scan to reveal enemy positions, but this eats power, you can become less noticeable to others using a stealth option, but again this eats your power level. Because power is also used for boost jumping, and offensive output, you need to balance the use of these systems lest you come under fire with limited options. Each suit has five weapon types to cycle through which gives players a weapon for each potential scenario whether that’s long, mid or close range.

Hopefully, Gingerbread add additional modes, some rewards and a progression system to give players more incentive to keep playing. As it stands in early access this is a neat game to dive into, even at this early stage. It does have an old-school vibe to it which is cool. Some more map variety would be great too, so we hope developer, Gingerbread take note. We’ll be keeping an eye on this game and will post a full-review once it leaves early access.

-Bot AI to play against

-Online play (with or without bots)

-Offline Play (with or without bots)

-Player Customization (armor skins, with many more options to come)