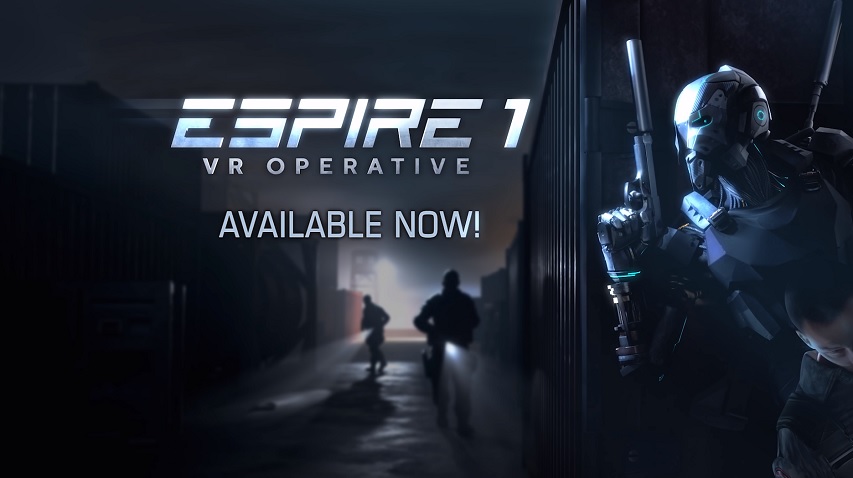 Tripwire Interactive and developer Digital Lode released their long-awaited and somewhat delayed stealth action game Espire 1 VR Operative. As the name suggests, this is a VR only title for Oculus, Vive, Index, PSVR and WMR headsets. The game thrusts players inside an advanced Espire 1 combat suit which the player remotely controls to fit the VR theme. Something is going down within the Australian based clandestine agency and it’s your job to get to bottom of it using said suit. Cue lots of sneaking around, climbing up walls, avoiding guards and cameras. However, whilst the core game seems well-met, is this stealth experience worthy of your time and money.

To begin, players choose from a wide selection of options including a comfort HUD for those with weak VR legs considering movement is thumb-stick based. A recent update allows for removal of all HUD elements for greater immersion. Players select, smooth or snap turning and tailor the experience to suit. That’s a good start then with all-bases covered.

The opening mission acts as a tutorial and first things players learn is how to climb metal surfaces with the motion controllers. This feature works well except some surfaces are not climbable. The game doesn’t tell you, which means players work out by visual analysis or trial-and-error which surfaces play-ball. In the heat of escape this is perhaps problematic.

Unfortunately, the tutorial acts as a basic introduction to game features such as positioning your weapons on your virtual body for easy access. Shooting locks , re-loading your default tranquilliser gun (which needs a reload after each single shot), healing damage and opening conveniently placed vent covers. Advanced elements which prove very useful don’t appear here which seems to be a bit of a flaw. Digital Lode suggest players should discover certain gameplay elements themselves which is a bit of a poor excuse really.

With a bit of digging around , players discover they can use cameras to mark patrolling guards, use them as remote cameras placed on surfaces (the game only tells you this during the last mission), use cameras as thrown distractions. The repair tool has extra functions too, such as shocking enemies and disabling laser mines and turrets. These are all very useful stuff the game doesn’t tell you and points to a tutorial section that’s totally incomplete.

Tutorial aside, the core game works very well, especially climbing up-high finding alternate routes if you’re using pure stealth to sneak past enemies. The option to creep-up and shout “freeze” is an option too, allowing you to take their weapon and then bop them on the head for a KO. Players grab the ragdoll bodies and toss them around out-of-sight. All good then? Well no, because the game has a glaring problem with how its AI systems work.

There are numerous problems with the AI and that’s after a recent update to address them. The AI is simply way too responsive and unfair to the player. Guards line-of-sight whilst perhaps realistic includes spotting the player in elevated positions in the dark which takes the fun out of sneaking around. Guard reaction time is so fast that it’s too unforgiving for those looking to ghost or not engage enemies. Dark areas aren’t really dark when guards spot you. The AI seems programmed to move to where you’re hiding regardless of whether you’ve been spotted. By-design the game wants players to shoot and KO their way through in a panther-style, which whilst immensely fun isn’t very stealthy. Given the range of assault weapons available from the offset and how easy it is to repair any damage, it’s quite easy to just charge through the levels without any care for stealth play.

Simply put, in its current state, Espire 1 feels like a bug-ridden mess at times pointing to a title that should have had some additional months tightening-up before release. There is too much inconsistency in the gameplay features making it a bit of a minefield. We won’t go into detail of all the bugs we found in our 10+ hours of playing. Some moments were very frustrating.

Visually, Espire 1 offers an interior based set of missions but there isn’t any indication of where you need to go to complete objectives. This means you have to rely on a way-point line to guide you when the levels start to include multiple joined areas and backtracking. Had the facility included signage or areas which stood-out, then navigation would have felt natural. This isn’t a massive issue but takes away from the fun. Graphics are quite dull in most areas although fit the underground facility theme. Only one objective has an outside area which is a shame because some additional locales outside would have made the game more interesting.

Audio is a area that works well in some cases and not so well in others. There are some wonderful performances from the main characters (aside from the Espire 1 suit robotic voice). The Australian accents are refreshing. However, the guards repeat their lines frequently which begins to grate after a while. Sound also feels bugged where you hear them regardless of your position making the game a little too noisy at times.

Espire 1 offers a decent sized campaign for those playing pure-stealth across its six main missions. However, during two stages in the campaign, players can’t proceed until they complete a number of challenge missions. This is a really odd design choice and whilst fun is at odds with the story. The same challenges are accessible at any time from the main menu. These are fun to play around with and come with leaderboards to test your mettle against the wider field. The main missions also have score breakdown, leaderboards and cheat unlockables making replay-value pretty high. Once Digital Lode fix the numerous remaining issues there is quite enough content for VR players. An additional difficulty which adds extra guards and even more intense AI is an option although at this juncture not worth it for stealth fans because it’s even more unforgiving. Action gamers will die quickly here too.

To conclude then, there is a lot to like about Espire 1 VR Operative. The foundations are there for a competent stealth-action game. However, in its current state it feels like an “early-access” title rather than a fully-fledged finished product. With some additional time polishing the AI and making the game fun-to-play there is potential. As it stands the unforgiving AI, audio problems and poor instructions for new players make Espire 1 a game for hardened stealth players only who have tons of patience to fall back on. For those resting on the action side of gaming then expect a short-lived and unfulfilling experience, too easy to best as a result.