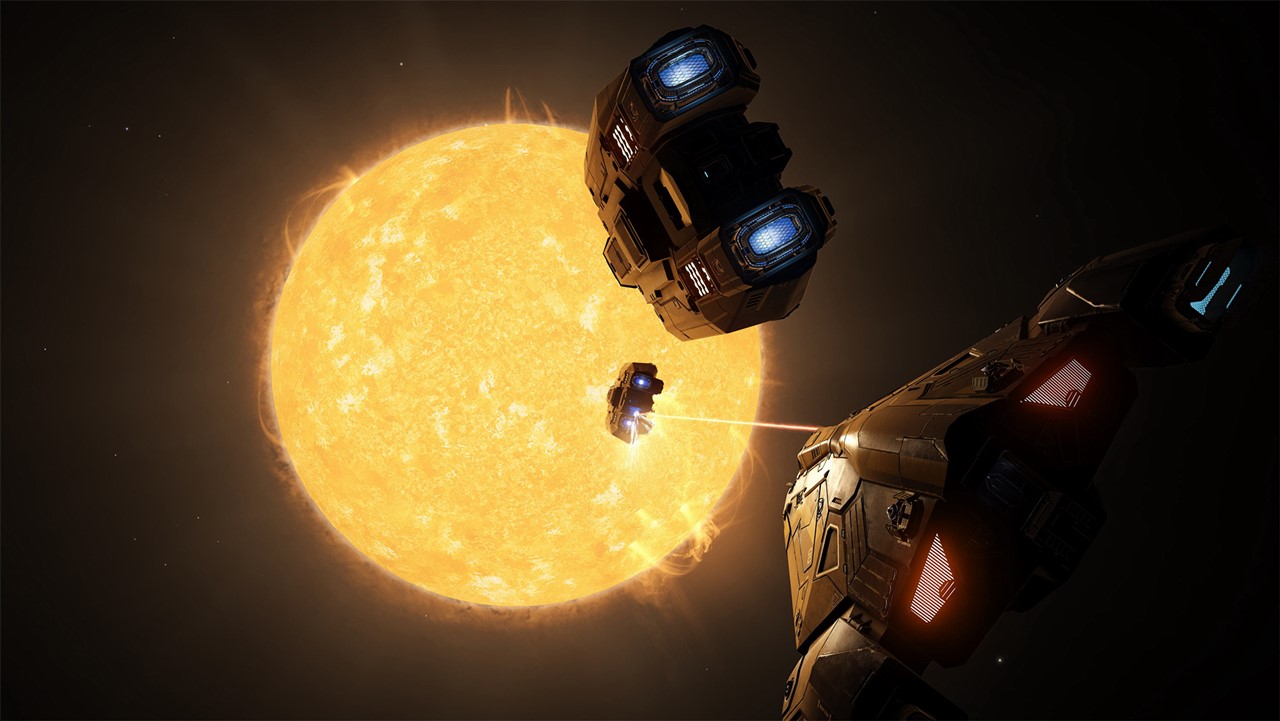 Spanning a huge expanse of digital space based on our real galaxy of stars, Elite Dangerous Beta is now available for purchase and play, coming in at £50 but offering a whole host of free roaming space exploration, trading and combat.  The game boasts 400 billion star systems to explore where players can go it alone or interact with the wider online community. Simply put, it’s a massive game and no doubt worth every penny in terms of value for money. Take a look at the trailer, and then head on over to the official website to get involved in the ever increasing beta.

Beta 1 increases the number of playable star systems in the game by a factor of 10 compared to Premium Beta, and covers a greatly expanded 29,000 cubic lightyear volume of Elite: Dangerous’ accurately modelled Milky Way galaxy centred around the Boötes constellation familiar to Premium Beta players.

The increased greater volume of Beta 1 space has an increased variety of celestial bodies, trading economies and star ports, and plays host to a large number of additional features and enhancements which together provide a vastly greatly enhanced, richer gameplay experience over the whole expanded volume of space.

Beta 1 will be initially available in English only, but will be updated shorty after to add localisation in the following languages: German, French, Russian, Polish, Dutch, Italian, Spanish, Mexican Spanish, Portuguese, Brazilian Portuguese, Swedish, Finnish, Norwegian and Simplified Chinese.

Look up to the night sky, your dreams of exploring the stars and the endless galaxies beyond are made real in Elite: Dangerous. Every dot on the vast cosmic starscape of the Milky Way is a star system and within are an amazing mix of planets, moons, asteroid belts, rings, comets or cosmological marvels waiting to be discovered.

The Milky Way galaxy features 400 billion star systems; each one can be explored. Take a hyperspace jump out into the unknown and bear witness to some of the most beautiful natural phenomena in the universe. You could be raked by x-ray bursts from a pulsar or witness stellar flares and coronal mass ejections up close.

Never before has the beauty and scope of our galaxy been so accurately mapped and so completely realized in a virtual world. Every single one of the stars in the real night sky is present in the virtual one, their planetary systems and moons are there just waiting to be explored.

Look up at the exotic night sky from a distant star – possibly be the very first human to see it, in the knowledge that it is real, that is really what you would see from that distant system. Elite: Dangerous creates a sense of wonder based on what is truly out there.

Team up with others on missions or travel alone exploring the expanse of space encountering fellow explorers on the way, Elite: Dangerous offers endless choice in one massively multiplayer online experience.

You can trade for profit between systems, ruthlessly pillage and pilfer at any given opportunity, take part in alliances to bring down planetary economies, tipping the balance of power, or simply explore the open world wonders of the galaxy, together or alone.

The Starship Services facility on each of the huge starports will be your first port of call. You start with little money in a Sidewinder, a small but capable craft, but with ambition and skill you can acquire ever more sophisticated and capable craft and weaponry.

Your first trade is much more than merely padding your bank account – it puts you in the driving seat of your own story.

Your choices can make you wealthy, can make you powerful, and can make you knowledgeable, but can also make you the target of every Elite-wannabe from here to the edge of the galaxy.

BLAZE YOUR OWN TRAIL

The year is 3300 and the human race has entered a golden age of expansion. The invention of fast hyperspace travel has enabled journeys of light years to happen in minutes, resulting in those from the core star systems spreading their presence ever outwards. The cold war that has raged between the Federation and the Empire for years still smoulders, and still can turn hot from time to time. Elsewhere, as the Alliance grows into a powerful coalition of systems, they have forced the older powers to rethink their dominance.

Blaze your own trail through the galaxy, travelling and exploring across vast distances, choosing your allegiances to suit you, and whether to fight for the greater good or take a decidedly opportunistic approach to each situation you are faced with.

Riches, knowledge and fame are there for the taking, but human nature is human nature – so keep your friends close, and your enemies closer.

Some may call you a friend, a pirate, a bounty-hunter, a smuggler, an assassin, a mercenary, but you are the pilot of your own starship, and that is what matters.