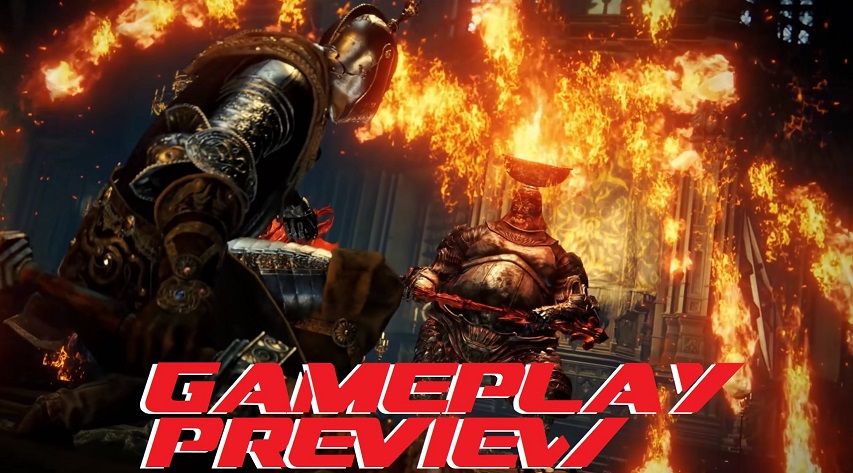 Bandai Namco allowed us some time recently to play an Elden Ring preview build for PC using remote access. This offered around 6 hours of play time. Take a look at our Elden Ring first impressions gameplay preview, and yes, that is a deliberate spelling mistake in the title only some of you might understand. Feb 25th is only a few weeks away and the hype surrounding this game (developed by From Software) is justified. As always, either watch the Youtube video, or read the transcript.

We take a look at a preview build of Bandai Namco’s From Software developed action adventure game Elden Ring. We are not even going to mention the word “Souls-Like” beyond this point considering Hidetaka Miyazaki is on-board to create the likeness to the series he has made his trademark. Elden Ring then enters the fray as a refinement of past glories it seems. It offers more of the expected formula, but also injects some much needed free-form play into the mix, creating a hybrid experience which we are going to say right out-of-the-gate is better. There we said it.

Dark Souls III offered some open elements, but the Souls games rely on restricting the player movement through often tight and hazardous locations, allowing for enemies to attack from obtuse angles. There is an element of learning their positions and countering any obstacles with that knowledge. Elden Ring still provides the same approach, but this time offers a much broader array of parameters players can adopt to conquer their opponents. We are not mentioning anything about the story in this preview, save that for when players can experience it themselves first-hand.

Let’s rewind for a second though because in our 5 hour play we spent quite a lot of time with the character creation. There are the usual suspects in terms of classes on offer, but the actual character models look much better this time round. The customization is pretty in-depth this time allowing for the default hardened characters to look less intimidating and dare I say quite attractive. Gosh, we never thought we would say that in a From Software game. We jest, and whilst you might spend a lot of time looking at the back of the character, it’s great players can make their own mark on the game with a personalized look. So those (like ourselves) into character creation will be well-pleased here.

Once the open pleasantries are out the way, it’s familiar ground as you work through the tutorial set within a dank and not so treacherous cave. Enemies are pretty dumb, and taking them out is easy-peezee. However, once completed, players head out into the open-world and it’s here where Elden Ring begins to show its differences to the Souls games. We fought an early boss and lived to tell the tale thanks to some deft blocking and dodging. Combat is as fluid as ever. Although the AI does still cheat with its auto lock-on, so timing is crucial to avoiding attacks or parrying.

Stealth… we love stealth and whilst the Souls games have always allowed for stealth attacks, they are a lot more prominent here for those who want to play that way. We traversed two areas across open plains consisting of woodlands and stony paths leading to an encampment of around 15 regular troops and some pet wolves. These were governed by a tougher leader who patrolled the main path through camp. Now if you mess up and get discovered, (certain troops will bellow on their horn and alert everyone) you can perhaps fight your way out. Although making enough noise might draw attention to the other troops who will join the fray. You can try to run away and cheekily hit a nearby site of grace resting point to reset the enemies or… hide in the long grass and lose them. They will eventually go back to their previous routines.

What is satisfyingly wicked, is being able to stealth kill all the troops (and their companion wolves) undetected. Thus making the battle with the general a one-on-one affair rather than getting into a mass brawl which you have little chance of surviving. What is really good here is that this encampment is entirely optional. You can simply sneak past and carry-on with your story objective which in this case the objective marker leads you towards a giant ogre with troops firing arrows at you. Guess what we did after attempting to fight this giant and learning the hard way. We ran, and we ran real fast past them all and made it to the next site of grace. Elated, we now had the advantage because you can fast travel between already unlocked sites of grace. But we were behind the enemy facing the other way. Stealth attack time. Although the goons cone of vision isn’t great, they will hear their fellow soldiers make noise when stealth killed. But, any advantage we could muster and we were glad to take it. Stealth fans are going to love this approach.

Difficulty and boss battles. We encountered a few of these characters and found them to be somewhat mixed. It’s definitely familiar “Souls” territory and players really have to gather all available resources before taking them on including summons and co-op with other players. We tried (painfully) to take out a boss guarding the castle entrance and failed miserably many times over on our own. With our passage barred, the idea is perhaps to level-up some more, get better gear upgrades from the blacksmith, or just “get gud”. As expected, progression is locked and “you shall not pass” until said boss is defeated. If like us your character is underpowered, then finding something else to do is always an option. So, the difficulty and challenge is ever-present , but at least you’re facing less cheese attacks from regular enemies which is balanced out by tougher boss characters. We like this approach.

To conclude then, Elden Ring bathes in its lore and dark arts making for a spectacular looking From Software entry for 2022 . It is a more accessible game due to its open-world design and revised gameplay quirks, allowing players the choice to farm XP before tackling story progression barring bosses. The game looks fantastic in 4K and plays very well. We’re really excited to play the full game this February 25th as should fans and non-fans alike. Ok, I’m Rob Cram thanks for watching.