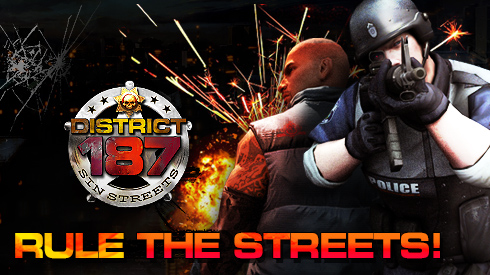 A reminder that CJ Games Global’s first-person-shooter District 187 Sin Streets is now available for download on PC platforms.  The free to play game has seen months of  beta testing, and now the full list of features, including the Street Fightclan system has been revealed.

Set in a cozy, serene mountain town with ample parking day or night. This Bomb map brings the Street Fight to the Suburbs and will leave your enemies pleading for their lives.

Players should search for the unspeakable in this abandoned factory in the center of the city. The safety of precious evidence looms in the ability of teams to strategically carry out bomb detonation tactics.

Grab some flashlight modifications and have a fun-filled killing spree in the dark. The popular District 187: Sin Streets map turns out the lights, making even the most skilled players retool their plan of attack.

Two new primary weapons will be available, including the AWM 300 high-destruction mobile sniper rifle and the lightweight, VZ Twin SMG, unleashing a fury of fire at a high rate of speed. In addition to the weapons, two new silencers, two new sights and a new flashlight have been added to round out the already robust gun customization capabilities.

The update also introduces the in-game cash shop featuring more than 20 items including new costume sets: the Rider’s Leather outfit for Gangsters and the GICN set for SWAT. Additionally players can purchase brand new Avatars: Mr. Mad for Gangsters and Jin for SWAT. To top it off Clan Marks are finally here with the new Change Clan Mark item!